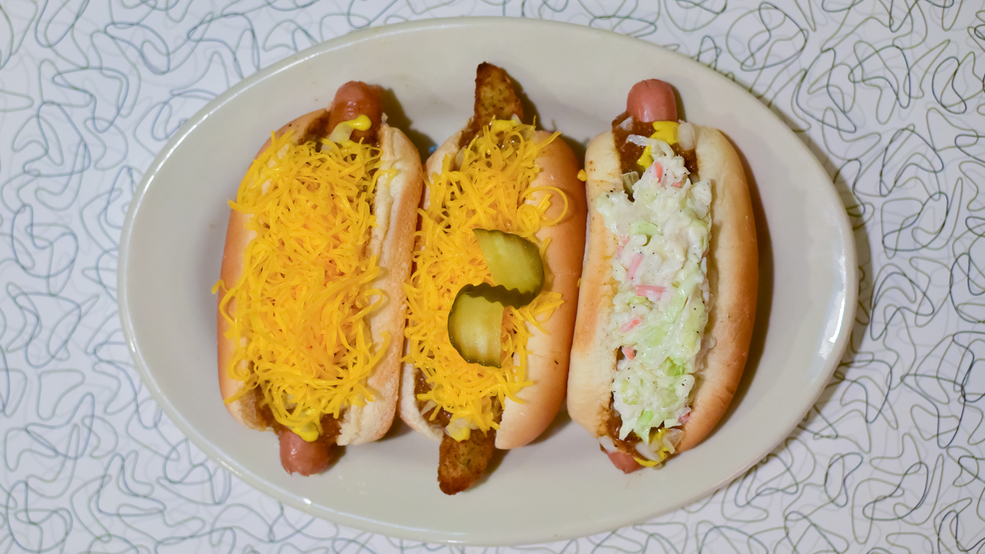 PLACE: Blue Ash Chili (Blue Ash Location) / ADDRESS: 9565 Kenwood Road (Blue Ash) / EPISODE: Season 9, Episode 7: “Comfort Food With Attitude” / It’s no surprise that Guy tried Cincinnati-style chili on his visit, and a Blue Ash Chili 6-way topped with fried jalapeños is what he ordered. Add the chili lasagna and the chili Philly cheesesteak to your Blue Ash Chili order when you go, and deep in his foodie heart, Guy Fieri will be proud of you. / Image: Phil Armstrong, Cincinnati Refined // Published: 8.18.19
SEE MORE

Whether you love him or love to hate him, no one can deny that Guy Fieri has a gift for finding some of the best and most underrated restaurants in the US.

Diners, Drive-Ins and Dives on the Food Network shows Fieri traveling around the country for a taste of interesting specialties loved by locals. The show, which is currently in its 30th season, has featured Cincinnati twice. Eat your way through all eight places Fieri's visited with this Triple D guide to Flavortown the Queen City.

Although Terry’s Turf Club came under new ownership in 2019, their menu and recipes remain the same. Stop by this local Linwood joint for a hearty bowl of filet mignon chili and the aptly named “Fieri Burger” topped with the restaurant’s one-of-a-kind Burgundy wine sauce.

It’s no surprise that Guy tried Cincinnati-style chili on his visit, and it's no surprise that he was wowed by the 6-way topped with fried jalapenos at Blue Ash Chili. Add the chili lasagna and the chili Philly cheesesteak to your order here and know that deep in his foodie heart, Guy Fieri is proud of you.

Since Guy’s visit in 2014, Melt’s location, ownership, and even its name have gone through a few changes. It’s now called Melt Revival, but new owners Shannon and Diane assure me that—although the BBQ chicken sandwich and vegetarian 3-way featured on Triple D aren’t always on the menu—they’re still available to guests who request them, in addition to their other locally sourced dishes served daily.

Jamaican-born chef and former UC football player Leo Morgan cooks up flavorful Caribbean fare behind the bright yellow and green facade of Island Frydays on Short Vine. The food has just as much flair as the colorful exterior, and Guy had only good things to say about the jerk chicken and traditional Escovitch Snapper fish he tried when he stopped by.

Guy called this Vietnamese restaurant “a full cultural experience” when he sampled the Pho Bo (beef and rice noodle soup) and their “special” Bahn Mi sandwich with headcheese and paté. If that’s a bit outside of your comfort zone, the menu also offers pork, beef, chicken, vegetarian, and vegan options to please every palate.

Guy visited the last three restaurants on this list in one trip because they’re all conveniently located near each other on Vine Street. First up is Senate Pub, which calls its fare “gourmet street food.” But, Guy Fieri gives the massive, specialty hotdogs a catchier name: winner wieners. For the full Triple D experience, try the Korean hot dog with braised short rib, kimchi, and pickled cucumbers.

Get a little tipsy on your next Taco Tuesday with the expansive selection of tequila and craft cocktails at Bakersfield OTR. Then, be like Guy and round out your night with the braised short rib tacos on house-made tortillas, or the Milanesa Torta with chicken and black bean spread.

Belgium native, Chef Jean Francois Flechet melds the flavors of his childhood with a Midwest twist at this restaurant’s five sites in Cincinnati. Follow in Guy’s footsteps by visiting the OTR location.

“When you walk through those doors off of Vine Street, you gotta kinda catch yourself and look around because you’re in another country,” says Guy. Then, order the crispy, light, Belgian waffles (duh) and the Carbonnades (beef stew) poutine for a taste of Belgium in the Queen City.