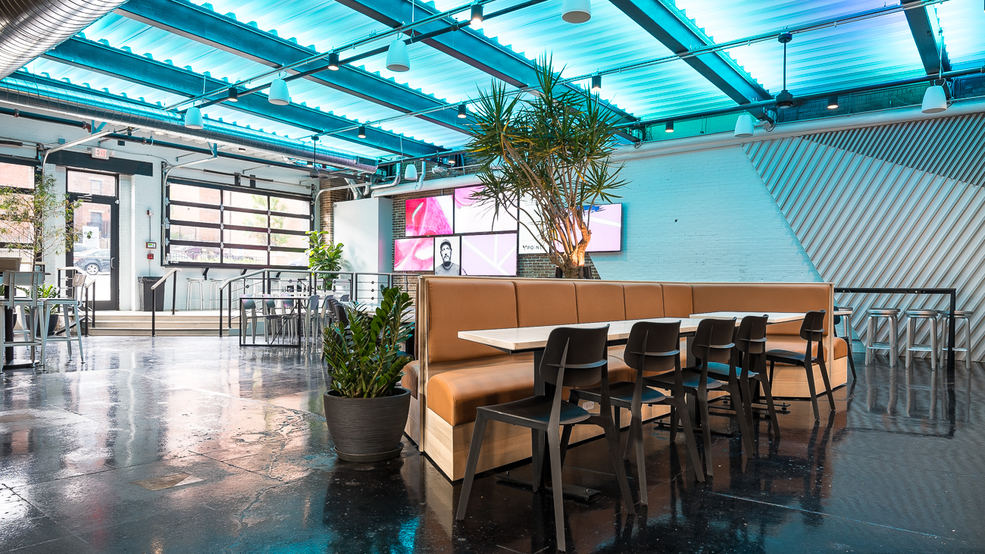 3 Points Urban Brewery is Pendleton's only craft brewery and is located at the corner of 13th and Broadway Streets. It serves a variety of beers in several sizes, and the taproom sports a range of artwork created by local artists. ADDRESS: 331 E 13th St (45202) / Image: Phil Armstrong, Cincinnati Refined // Published: 6.7.18
SEE MORE

Before I get into 3 Points, I want to talk about bears. Yes, bears. I'll get to beers in a second.

Bears are solitary animals with a commanding presence. They’re active both day and night, and they expertly tackle a wide variety of terrain. They’re also a unique species with three distinct diets under their umbrella: carnivores, herbivores, and omnivores.

Now for the segue. Thanks for indulging me.

3 Points Urban Brewery, Pendleton’s craft beer stronghold, exhibits bear-like qualities if you think about it. It already has a commanding presence as the only brewery in Pendleton, it’s open day and night, and it’s already expertly tackled a wide variety of beer. It’s also a unique brewery with three distinct qualities under its umbrella: its bar is art, its space is an experience, and its beer is delicious.

The only thing it doesn’t have in common with bears is its need to hibernate. Luckily for us, Pendleton isn’t sleeping on the craft brewing scene since 3 Points got up and roaring.

3 THINGS TO LOVE ABOUT 3 POINTS

The location and aesthetic take 3 Points above and beyond. Pendleton adding a brewery makes sense when you consider the aggressive push to add new restaurants and bars to the neighborhood. It's an easy stop during a night out in OTR or Downtown.

Filling the brewery with art from local artists, huge windows for natural light, greenery, sleek furniture, and a glossy concrete floor makes for one heck of a gorgeous taproom, too. Andrew Salzbrun and architect Joe Bodkin of Newbar Group spent two and a half years planning and constructing the beautiful space.

And though that third point should be a given, it's still worth underlining. What's a good brewery without a good pint? After enjoying a glass of Origami, their "post coast" IPA, I found myself asking the barkeep about growler options.

AND SPEAKING OF THE BEER...

It hits the trifecta of things I want out of a good craft brew:

Not an IPA fan? Try the pale ale. Too tame? Have the pilsner, oatmeal stout, saison, Vienna lager, wheat ale, or something else. The point is, there are options at 3 Points that should satisfy any beer-drinker who visits.

There's variety in sizes, too. You can order a 4 oz, 8 oz, or 16 oz glass of the good stuff. It's perfect for when you want to try something new or know that another pint of Rattle & Shake is going to result in a $200 Uber "cleaning fee." (You know what I mean.)

And all of them are good. I'm no cicerone, but I've had a few in my time, and this brewery's selection is fresh and flavorful. Thankfully, that fresh and flavorful taste is offered by way of growlers. You'll thank past-you when future-you opens your personal fridge to some 3 Points—trust me.

3 Points isn’t a giant craft brewery with 40 beers on tap and distributing to several states. It doesn't have hundreds of corn-hole-playing people in the taproom tripping over felled giant Jenga blocks. But it's also not a tiny brewery with an unbearable taproom you'll want to avoid. In fact, it hasn't been soft about marketing itself to attract business at all. It knows it's absolutely a destination to visit, and it wants you there to experience what it offers. Don’t ignore that message.

No, it’s somewhere in the middle. It's perfectly balanced. Pendleton’s brewing baby is just right.