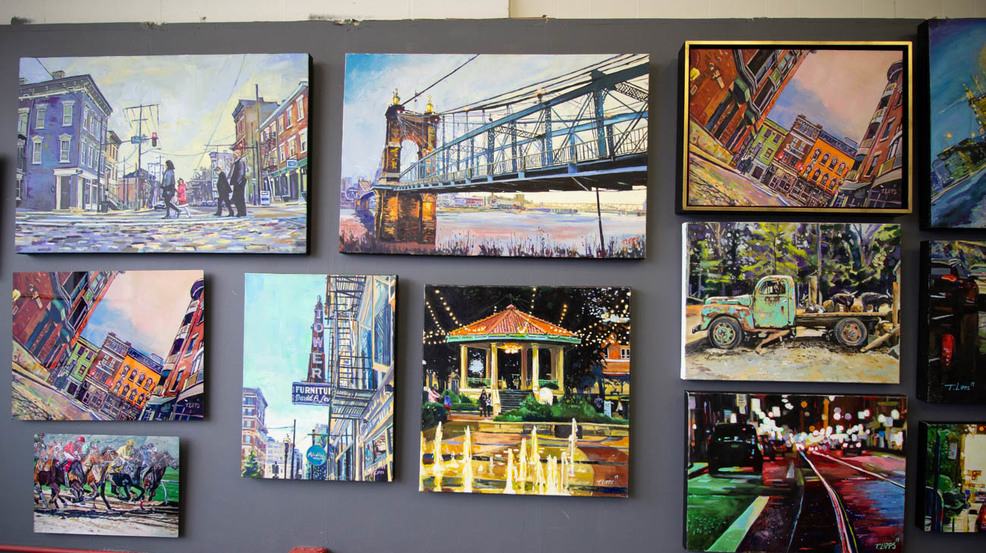 Tony Lipps is a local alum of Moeller High School and Kent State University who returned to Cincinnati to pursue a career in fine art. Before becoming a full-time painter though, he served as a police officer in the Hamilton County Sheriff’s Department out of college for 13 years. He officially began his art career in early 2019, blending photo realism and abstract styles in his vibrant portraits of Cincinnati cityscapes and sports scenes. / Image: Katie Robinson, Cincinnati Refined // Published: 2.16.20
SEE MORE

From Officer to Fine Artist, Tony Lipps Is Among Cincy's Best Contemporary Painters

Who doesn’t love capturing a picturesque shot of Washington Park? Or the Roebling Bridge at just the right angle? Or even a glowing skyline during the morning’s golden hour?

Cincinnati artist Tony Lipps captures Cincy scenes in a beautiful way that's a little messier and takes a bit longer than just snapping a pic and posting it to Instagram.

Tony Lipps doesn’t just paint as a hobby or a side gig, although taking the plunge to commit to the career has been a long-time coming. He originally got into art in Moeller High School's extensive art program. He later attended Kent State University to continue the pursuit but didn’t know which artistic direction to take.

“Originally, I wanted to be an illustrator,” says Tony. He took graphic design courses for a semester but realized it wasn’t for him. He turned to an art education route, which also ended up being a no-go.

“It just wasn’t in my vision,” he says. “I really wanted to become a better artist so I said, ‘I’m going to be a fine artist and go through the lessons of that and see where it takes me.'”

It took him to jail.

No—not like that. After graduating from college in 2005, Tony joined the Hamilton County Sheriff’s Department where he became a jail guard and eventually a patrol officer. Tony’s dad had also been a cop and he figured it was a more realistic and dependable occupation path to take compared to being a painter.

While working in the jail, he practiced his craft during his off time. Co-workers took notice and started giving him project requests. He did a painting for a friend featuring former Bengal Domata Peko that Peko himself ended up seeing on Twitter. He liked it so much, he reached out to Tony directly and commissioned a duplicate from him.

Tony also started painting for benefits and fundraisers. When a deputy would pass away, he’d paint commemorative portraits for their families. His sheriff was so supportive of his dream of becoming an artist that he gave Tony a year of absence to explore a painting career to see if it was something he really wanted to pursue.

“Everybody knew what I wanted to do; they knew I wanted to be serious about this and I could jump right in,” Tony says. He used the time to dabble in the craft, but it wasn’t until years later that he decided to set out in the profession.

He has now been a full-time artist since January of 2019, with a studio in Essex Studios to show for it.

Starting out, Tony experimented with painting landscapes, city, and sports scenes. “I figured doing cityscapes and familiar scenes of the city would really help build that notoriety.” He ended up enjoying city subjects the most. And if you’re wondering why his paintings look so much like photos, it’s because they started out that way in a sense. He takes pics of images he wants to paint on his iPhone, adjusts a few color settings, and paints them from there. When it comes to his technique, Tony says he loves working with the various textures in shots of the city.

“My paint application has really evolved in just over a year. I’m breaking away from photo-realism and starting to go with a more expressive palette. I like to keep a little bit of photorealism in there, but then abstract it somewhat. I add layers, I remove layers. I’m all about the process.”

Tony also recruits his friends into taking candid pictures around town for his paint inspiration. One of his favorites—featuring a little girl with her family in a crosswalk near Music Hall—was created with the help of a GoPro attached to his friend’s truck bumper that he drove through the city, capturing plenty of in-the-moment footage.

Aside from auctioning off original paintings for causes like the American Heart Association, Tony has been featured in the Reds Hall of Fame Museum as well as in an exhibit at the Fitton Center in Hamilton hosted by the Reds Hall of Fame. He also displayed his work at Cincinnati Art Galleries in 2015 when the MLB All-Star Game came through, selling his Pete Rose piece on the opening night of the exhibit.

He's set up shop at craft shows around town like the OFF Market at MadTree, but he predominantly sells his work directly from his website and Instagram (linked below). Interested buyers can order the prints on canvas, metal, or paper. Original works are higher in price, so copies of his prints offer a more affordable and accessible option.

Take a peek of Tony Lipp’s studio space in the photo gallery above. And to see more of his paintings, visit his website or Instagram.