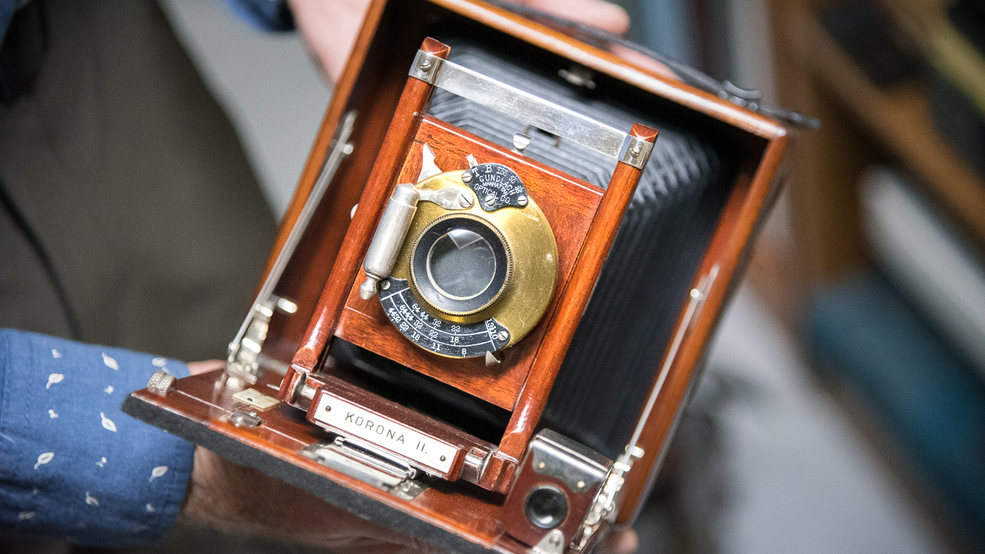 Around 20% of the total collection is still operable. Tim modifies some of the old cameras to use modern day film just so he can take a few photos often using 100-year-old technology. His efforts to restore the cameras has become a hobby in and of itself. / Image: Phil Armstrong, Cincinnati Refined // Published: 2.25.19
SEE MORE

Last year, we did a photographer spotlight on Tim Jeffries. A native of Cincinnati and photographer with over 45 years of snaps under his finger, Tim has enjoyed the art of making photos for longer than you've probably been alive.

What we didn't go into in that interview was Tim's impressive collection of vintage cameras he showcases inside his East Side home. Displayed neatly along several shelves on three walls in his basement, Tim's collection of around 175 cameras includes models that date from 1896 to 1980, the majority of which are Kodak. What appears to be the result of a lifelong interest in vintage camera collection is deceiving; Tim's only been acquiring pieces for his collection for about five years.

It was a relative who got him started. When his father-in-law gifted him an old camera, he caught the collecting bug and began researching what else he could get online. When he came across something interesting on eBay, he'd bid for it. To fund his new passion, he shot weddings on the side. Several years (and weddings) later, vintage Kodaks, Nikons, Tachiharas, Olympuses, and many other brands line the perimeter of his basement. The collection is presented beneath printed examples of the photos he's actually made with the handful that still operate.

That's right, some are still functional. Remember: Tim isn't just a collector. He's an experienced photographer who knows how to work a camera, regardless if it predates him.

He estimates around 20% of the collection will still make a decent photo. Half of that 20% has been modified by Tim himself to fit modern film (because the film they originally used is no longer manufactured). In fact, a box camera dating back to 1896 and adapted with 35mm film is one of those few cameras he's been able to bring back to life despite it being 120 years old. The practice of restoring of old cameras has become its own separate-yet-connected hobby for Tim.

"Some of them are as fabulous—if not more fabulous—as a modern-day digital without all the bells and whistles and ease of use," he says. "Many of them I've only used once or twice just to prove I could bring it back to life and use it again."

And while he prefers to shoot with a digital SLR today thanks to its immediacy and lack of consumable resources, he recognizes the undeniable importance of shooting with film. According to Tim, someone who uses an old film camera is better disciplined and takes more time to compose their shot. Ultimately, it makes photographers better at what they do.

Tim is always looking for more pieces to add to his collection and offers restoration services to anyone who might have an old camera they want to get working again. If you or someone you know has an old camera you wish to donate or sell, Tim is your guy. Likewise, if you want advice on starting your own camera collection, Tim is a fount of knowledge for that (obviously).

Hit up the gallery above to see Tim's awesome collection.

If you want to get in touch with Tim, he's reachable on Facebook. If you'd like to see photos he's made with his vintage cameras, check out his website.