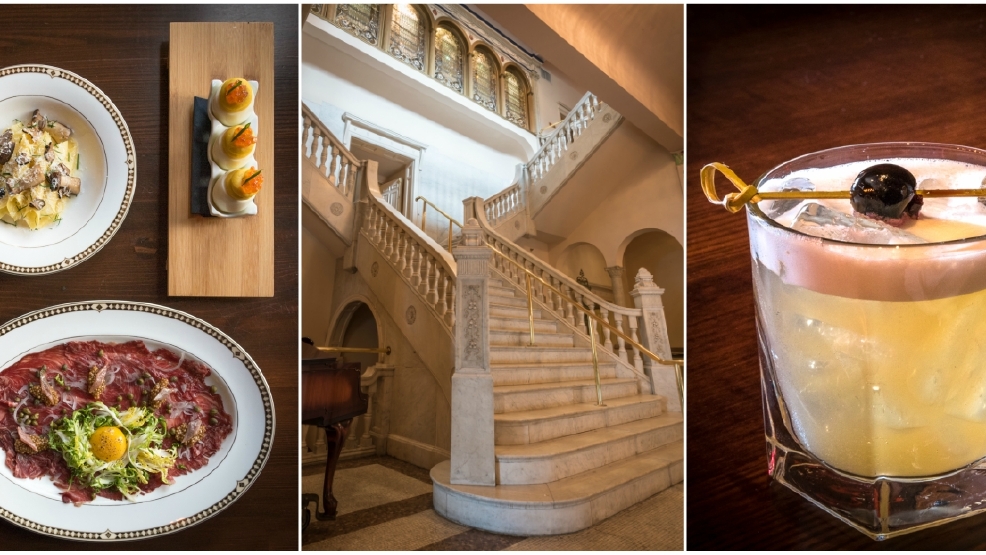 The Phoenix Is a Restaurant, Event Venue, & Gorgeous Historic Building All in One

The Phoenix, in Greek mythology, is a bird that continually regenerates and arises from the ashes of its predecessor. You've probably seen depictions of the Phoenix engulfed in flames because it's closely associated with the sun.

Upon its completion in 1893, the region’s first Jewish businessmen’s club was thrilled to occupy the lavishly-decorated Italian Renaissance palace Hannaford built for them. Tiffany glass, a grand marble staircase (which bears striking similarities to those of City Hall), and a stunning wooden bookcase adorned the halls and rooms. But after only 18 years, the club next door purchased the building and turned it into a “sports annex” (translation: a rec center).

Time passed, and it closed in 1983. But almost a hundred years after the club was built, someone bought it and decided to restore the building to its former glory. That is, Hannaford’s former glory. The new Phoenix, which shared its name with that famous Greek legend for so many years, was metaphorically rising from the ashes of its predecessor.

And rise it did.

Today, it’s one of the city’s premier event spaces. Weddings and special events are easily held within its many suites and third floor Grand Ballroom. That ballroom is huge, too. Like, 4752-square-feet with 32-foot high ceilings huge.

But if you’re not throwing a party, the Phoenix is still a venue you need to visit because of its in-house restaurant, The President’s Room. While it boasts “American cuisine,” German and Italian influences take it up a notch to transform the whole menu into a melting pot of delicious classic and contemporary fare. Add in a sophisticated, dimly-lit cocktail lounge, with a slick bartender and you have yourself one heckuva space to enjoy a mixed drink.

The Phoenix was built over a hundred years ago as a club for businessmen, disappeared for a few years, and reemerged as an elegant restaurant & bar within an incredible event space for everyone. Our city is home to many stories with larger-than-life characters sprinkled throughout its history, and I’d dare to say the Phoenix isn’t just Greek mythology any longer.