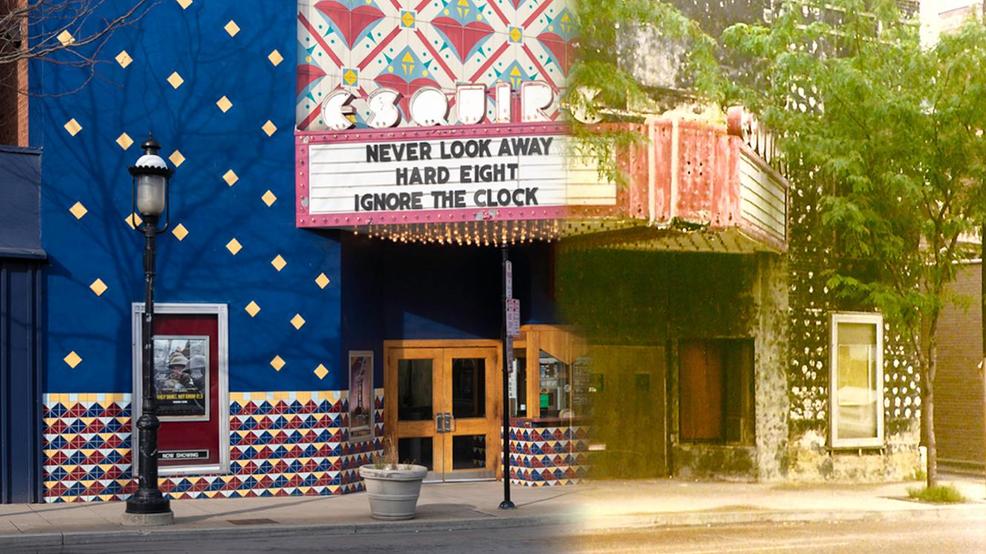 When Cincinnati lost the Albee Theater in 1977, many locals regarded its demolition for the Westin Hotel a mistake. Though a grassroots effort to save the Albee failed, the message was clear: Cincinnatians were finally talking about the importance of historic preservation. In a final attempt to protect something from the old movie house from being lost forever, the Albee's iconic facade was saved and mounted to the south side of the Duke Energy Convention Center for parked cars in the adjacent parking lot to appreciate. It still awkwardly looms over Fifth Street today.

But the Albee is just one footnote in the long history of long-gone American theaters. Old single-screen movie houses built in the early 1900s through the 1940s were slowly blinked out of existence up through the late-90s. The Marianne in Bellevue, the Bijou and the Lyric downtown, and over a hundred others around the area ran their last reels over the ensuing decades.

But for at least one of those shuttered theaters, the hard lesson learned from the Albee's demise lingered. When Clifton's Esquire Theatre closed its doors, the community cheered for a sequel long after the credits rolled. But seeing it reopened wasn't easy. A years-long fight ensued that involved a powerful redhead with pigtails, the Ohio Supreme Court, and a cadre of determined Cliftonites who sought to keep french fries from replacing the popcorn—and the neighborhood itself.

The Esquire Theatre opened as a single-screen house in 1911 and initially played silent films along with hosting vaudeville acts. It wasn't until 16 years later that it would begin playing its first films with sound. The theater enjoyed decades of steady business, catering to cinema-seeking Cliftonites along the Ludlow Avenue strip. By the 1960s, though, the theater was struggling. It played arthouse films in an attempt to remain a unique destination during a time when multiplexes playing the latest blockbusters were the preferred way to see a movie for the majority of the movie-going populace.

Finally, after years of battling back the onslaught of cable TV, VCRs, and multi-screen movie theaters, the Esquire called it quits in 1983. It sat empty for a year before the owner found a prospective new tenant: Wendy's—yes, the fast-food chain—decided they wanted to redevelop the 70-year-old theater for some old-fashioned, square burger-flipping.

When Cliftonites caught wind of the plan to turn their beloved former theater into a Wendy's, they realized the Gaslight District was inching closer toward a fate they didn't want. Adding fast food to the strip would kick off significant and irrevocable changes to the character of the neighborhood; if one chain went in, how long would it take for others to follow suit and dilute the one-of-a-kind neighborhood into a homogenized McMess of indistinguishable, greasy paper bag food joints? They wasted no time planning their opposition to Dave Thomas' encroaching fried food expansion.

A committee known as the Clifton Theatre Corp. formed to save the Esquire. For the next three years, developers and persistent Cliftonites in the CTC and Clifton Town Meeting groups met swords in rigorous legal battles. City council members and attorneys got involved, it went to multiple courts with mixed results, and it eventually ended with a final duel in the Ohio Supreme Court in 1986. It was there, after years of fighting and realizing the people of Clifton were determined to keep Wendy's out of the Esquire, the owners forfeited. They took a tax break and donated the theater to the city of Cincinnati.

It achieved everything the Albee campaign didn't 10 years earlier. Preservationists had saved the Esquire, and they celebrated a well-earned victory.

The Esquire was turned over to the CTC, and volunteers worked to raise funds to restore the badly decayed theater.

Architect Paul Muller, president of the Cincinnati Preservation Association today, designed the look for the Esquire's revival. He describes the bold, colorful facade as a "decorative, Victorian hallucination" of sorts. The yellow porcelain enamel panels were arranged to look like fireworks, or a champagne bottle pop, against a royal blue background as a nod to celebrating the theater's triumphant return.

In April of 1989, the Esquire Theatre formally reopened as a three-screen movie theater with the film Cinema Paradiso, an Italian picture about a movie theater reopening. The following year, Gary Goldman, a law student whose family has a long history of working in local movie theaters around Cincinnati, was brought on to manage the theater and make it profitable. He's still doing it today.

Since the Esquire's revitalization, Ludlow Avenue continued to grow into a vibrant retail and restaurant corridor in the Gaslight District. Paul doesn't see that as a coincidence, either; he and many others credit the Esquire's return as the catalyst for what the area has become today.

After an expansion in 1999 that doubled the number of screens the theater offered, as well as making the jump to all-digital projection in 2010, the Esquire remains the favorite place to see a film for many locals. It's been 30 years since Cinema Paradiso reintroduced the theater to the people of Clifton, and the Esquire shows no signs of slowing. Management plans a variety of destination programming that brings people out of their Netflix-enabled living rooms and into the theater.

In addition to the Oscar-contenders and mainstream first-run films they always play, everything from the classics to cult favorites to films themed around upcoming holidays are played each weekend. Events, like Q&A sessions with local filmmakers, are similarly only offered at the Esquire. And, of course, the theater's reputation as a purveyor of arthouse films remains. (Don't forget Rocky Horror nights!)

It's easy to be grateful for everything the theater is today when you think about how close it came to being lost. None of its excellent current programming would be possible without those Clifton preservationists of the mid-1980s, though. Had the Esquire gone the way of the Albee by reason of inaction or apathy, Ludlow's golden ticket to art and pop culture would've been fried.