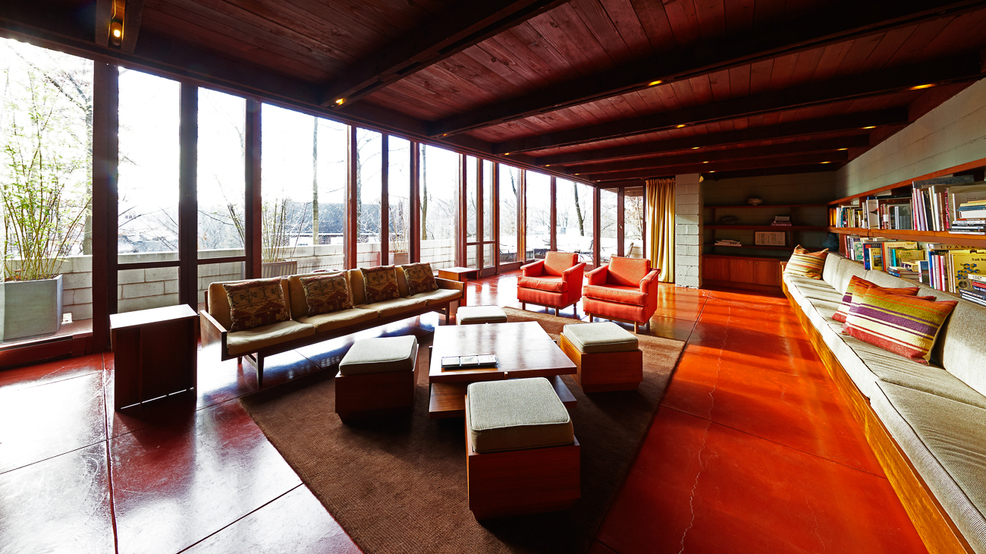 Owners Janet Groeber and Chuck Lohre bought the Boulter House in 2003 and spent 15 years restoring/renovating parts of it. Their care for the home and respect for FLW's original design for the home is evident in the way they've managed to improve the house without fundamentally changing important design elements. They've listed the house for $695,000. / Image: Steve Paszt Photography // Published: 1.12.19
SEE MORE

Frank Lloyd Wright is arguably the most famous American architect of the last 100 years. During the course of his career, he designed over a thousand structures—more than half of which were actually built. In addition to his career as an architect, he spent time decorating the interiors of his homes with custom-made furniture, too.

His work spanned the United States from coast to coast. From personal houses to houses of worship, offices to museums, and myriad other buildings used for various purposes, Frank Lloyd Wright was as prolific a creator as any. His work is highly regarded today by fans of modernist design and architecture.

Ohio, while it has several, isn't considered a treasure trove of Wright buildings. We visited Springfield, OH last summer to see the Westcott House (1908), but that's an hour north of Cincinnati. In terms of his work in our own city, the selection drops to single digits. In other words, Wright works are very special in the Queen City.

There is one in Clifton, though. The Boulter House, built in the mid-1950s, was designed in the twilight years of Wright's career.

Cedric G. Boulter and Patricia Neils Boulter needed a house. Her parents had a connection to the famous architect, so she wrote him a letter asking him to design them a home. He agreed to it.

While Wright was located in another state, one of his apprentices, Benjamin Dombar, was local and acted as the supervising architect to tweak Wright's design—which was originally devised for a coniferous forest in California and adapted to the lot in Clifton.

As he was known to do, Wright put his personal touch on the custom-designed furniture and lighting for the house, too. The 2-story home faces south so the large windows can let in plenty of natural light, igniting the warm colors embedded in the Douglas fir timbers propped up by concrete blocks. This is key to the house's original design, which hasn't been changed in the +60 years since it was built. So significant is the work, it's listed on the National Register of Historic Places.

Janet Groeber and Chuck Lohre take the home seriously. After purchasing it in 2003, they spent the intervening 15 years restoring sections to its original design while simultaneously updating the kitchen, bathrooms, landscaping, and adding insulation to make it more comfortable. Their attention to detail and respect for Wright's mid-1950s vision doesn't go unnoticed; Janet and Chuck are appreciated by fellow Wright enthusiasts for their care of the Boulter House during their time owning it. They're only the third owners since it was built.

Janet and Chuck, as much as they love the 2,450-square-foot historic Boulter House, are moving. The house is listed for $695,000. View the listing here.

See the Boulter House in the gallery above.