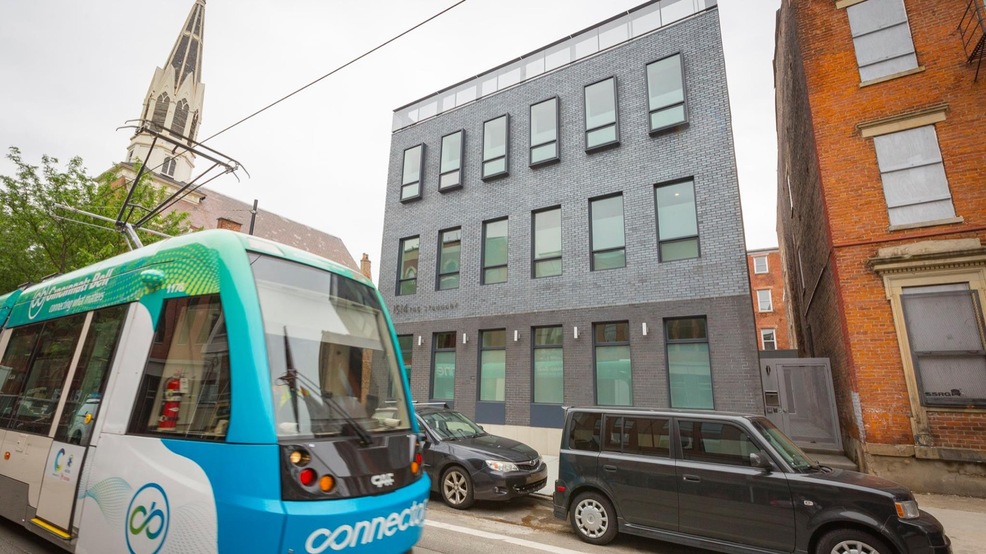 Terry Boling is an architect and professor at the University of Cincinnati. His works include The Stannary on Race Street, Artichoke on Elm Street, Jenco Brothers Candy in Clifton, and a remarkable Wyoming renovation. / Image courtesy of Terry Boling // Published: 12.24.17
SEE MORE

We sought out Terry Boling for an architect's Q&A due to his work on The Stannary in Over-the-Rhine. It's a stunning testament to how modern design can harmonize with the neighborhood's historic buildings without flatly imitating them. But Terry's other works are just as fascinating, including the remarkable renovation of a Wyoming bungalow and his work on Artichoke near Findlay Market.

Yes, it's cliche to call Terry one of the "rising stars" of Cincinnati's flourishing architecture scene, but that doesn't make it untrue. Both his work and his responses below bear that out.

Cincinnati Refined: Where are you from originally? If not Cincinnati, what brought you here?

Terry Boling: I grew up in Chicago and studied architecture at the University of Cincinnati, where I am currently an associate professor in the School of Architecture and Interior design. I worked briefly in Cincinnati after graduation and moved to Europe during the recession in the early ’90s. I worked in Brussels and Vienna for several years, where my eldest daughter was born. Family beckoned and we returned to the U.S. After visiting good friends here upon our return, we were convinced to put our roots down—again—in Cincinnati.

CR: How would you describe your architectural style?

TB: In general terms, I tend toward material, surface, and detail richness in favor of formal gymnastics. I’m less interested in allegiance to a style than I am in capitalizing on particular opportunities that present themselves in each commission. Most often, these opportunities develop from constraints. For example, in the Artichoke project on Elm Street, the existing building was extremely narrow, which led me to place vertical and horizontal circulation outside the building. This necessity allowed me to address the circulation as the primary move in the project, foregrounding it through detailing and surface treatments.

CR: What building(s) do you turn to for inspiration nationally or internationally?

TB: I just returned from a 7-week tour of Europe with my students where we experienced many of my favorites spaces. Peter Zumthor’s Thermal Baths in Vals, Switzerland is beautiful, soulful, and serene, and is married to the Swiss landscape with such care and authority. Zumthor reminds me that our job as architects is ultimately about creating rich, human experiences that satisfy your body, mind, and soul. Carlo Scarpa’s Castelvechio Project in Verona, Italy is also a huge inspiration, especially when considering the layers of history and beautiful conversation between old and new in his work.

CR: Is sustainability important to you? If so, how do you work it into your designs?

TB: The word sustainability has been overused and maligned, but I do believe that architects have an enormous responsibility to be good stewards of our environment as best we can. As construction waste alone accounts for about 40% of our landfills, I have developed a strong interest in the re-use of materials that might be considered waste, and I've been researching this for more than 10 years in a variety of projects with students and in practice. I have investigated ways to minimize material waste through the processes of re-formatting and re-assembly. In the Wyoming loft, for example, I made a fireplace surround with stacked pieces of leftover cement fiberboard from the exterior cladding. In the Artichoke project, scrap pieces of acrylic were cut into thin strips and bonded to form an edge-lit LED surface for the sales area.

CR: Referring to The Stannary, how did you approach designing a new building in a neighborhood with so much history?

TB: While I love and appreciate the gorgeous detail in the Italianate buildings that comprise most of Over-the-Rhine, it would be blasphemous to replicate what was done before. In the case of the Stannary, I wanted to incorporate the rhythm of windows on the street, yet create my own details for the actual openings. Instead of richly decorated cornices, lintels, and sills, I chose to use a very minimal steel frame that starts out recessed on the ground floor and projects out to provide relief, shadows, and window seats on the upper floor. This approach was within the strict historic guidelines, yet allowed the Stannary to be in dialogue with the existing buildings around it rather than imitating them.

CR: Broadly, should new infill in OTR blend in or stand out?

TB: Building in Over-the-Rhine is an honor and something that one should never take lightly. There are situations that call for background buildings, yet others require a building to be highly differentiated from its context. A good architect will carefully study the situation and determine which of these approaches (or where on the spectrum) is most appropriate. This requires a great sensitivity and care for the urban context that exists at the moment while at the same time imagining a future that one desires to be a part of. Rafael Moneo’s City Hall in Murcia, Spain does this well by simultaneously responding to and transforming the context.