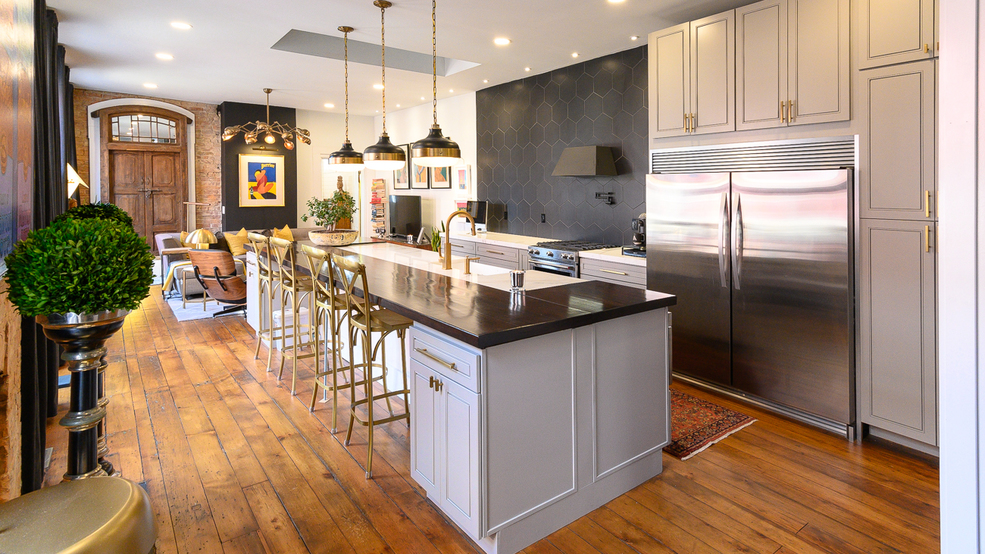 Smyth Home Solutions is a home renovator led by General Contractor Eric Smyth. Smyth's work involves the restoration of old homes in which electrical, HVAC, plumbing, carpentry, tile work, and other services are needed to make it livable. Using a small team of loyal subcontractors, Smyth and his team respectfully update historic homes and preserve as much unique and original content as they can in the process. Those original elements are then incorporated back into the final build. / Image: Phil Armstrong, Cincinnati Refined // Published: 1.14.20
SEE MORE

Relaxed. That's how I'd describe every interaction I've had with Eric Smyth of Smyth Home Solutions. The General Contractor is an affable dude with years of experience and seemingly limitless know-how when it comes to making a house a home for his clients. Don't let his casual demeanor fool you, though; Smyth is a true professional who effortlessly doubles as a friend.

"We build relationships with our clients where it's almost uncomfortable to call them customers," Smyth says.

While touring his handiwork in the West End, it's clear he's good friends with the people who own the homes he's refinished. At first, you'd think that was a novel concept, but when you stop to think about it, it's not beyond the realm of logic. Smyth and his team of subcontractors—the folks he uses for all of his jobs—know these homes inside and out, often better than the homeowners themselves. The relaxing sanctuaries those people wake up to in the morning and retreat to in the evening are a result of Smyth and his team realizing the client's vision. When someone has such a direct influence on a person's most intimate living space, the conditions are right for friendship.

Smyth, who lives north of Cincinnati, works primarily in the urban core these days. Much of his work can be found in the West End, specifically within the Dayton Street Historic District. When you learn Smyth is a historic preservationist on top of being a General Contractor, you'll understand why he's spent so many working hours on Dayton Street between Linn and Baymiller. As someone whose livelihood has taken him across the construction spectrum, he gravitates toward older homes with history over building from the ground up. While historic renovations are often significantly harder to do than new builds, he enjoys it.

"It's challenging. There's always a speed bump or a hiccup, but even though they're a headache, you have to respect it," he says.

It's not lost on me that a thoughtful builder who has a long list of friends also cares deeply about preserving the work of the builders who came before him. Smyth is nothing if not empathic.

Using four to five regular subcontractors, Smyth turns a client's historic property into a modern, livable home by updating around the history. That last part is key: whatever original content remains in the house, he will save and incorporate it into the final build. His goal is to reuse all the woodwork and unique elements he can so the house still tells its story.

Part of that desire to preserve is influenced by his appreciation for the quality craftsmanship of older homes. Because Smyth is so intimately involved with modern construction, he marvels at the way 19th-century houses used to be built.

Smyth Home Solutions specializes in remodeling kitchens and bathrooms, but they've done full home renovations when needed. Smyth's favorite job to date—a house on Dayton Street—was a total remodel, with an HVAC install that cleverly got around lowering the ceiling without ruining the historical integrity. He even found period-specific replacement balusters that perfectly matched the existing set on one of the railings to complete it. That attention to detail and respect for a place's history is what sets him apart from so many other home renovators.

"I swore off investors years ago. They just want to get it done, not done right," he says. Many of his new clients came to him directly because they're friends with someone whose house he worked on in the past. Their experiences with Smyth, from his personable nature to his skill and passion for doing a job correctly, keep landing him new work on old homes.

To see examples of Smyth's work in the West End, check out the photo gallery above.

Follow Smyth Home Solutions on Facebook, or email him at SmythHomeSolutions@gmail.com if you have a historic property in need of a little (or a lot of) touching up.