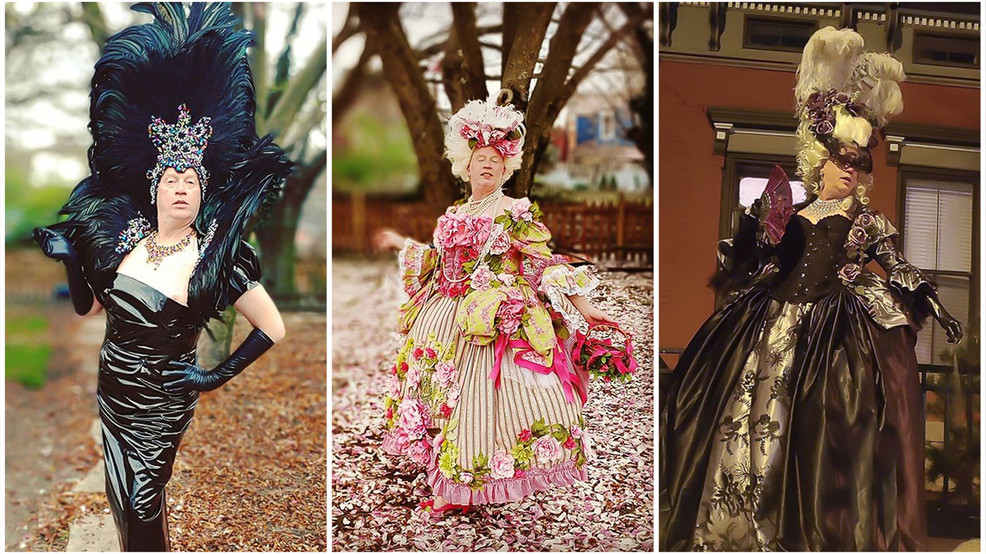 Ron Padgett, a Covington resident, does a nightly fashion show in which he posts a photo of himself wearing fun costumes he's designed himself over the years. He uses the hashtag #LiterallyHangingInMyCloset on each post because his costumes are, in fact, literally hanging in his closet. His neighbor, Evan, takes his photo from a safe distance. In a time when physical human interaction is discouraged, it's given Ron and others something fun to do and experience from the safety of their screens at home. You can follow Ron on Instagram at @Ron_Padgett. / Image courtesy of Ron Padgett // Published: 5.3.20
SEE MORE

It all started with a carpet of magnolia petals in the back yard of Ron Padgett's duplex in Covington in early April—just a couple of weeks into the state's shelter at home order.

After getting his neighbor on board to photograph him, Ron donned his elaborate Marie Antoinette outfit and stood amongst the pink and white petals scattered across the grass. He posted it to Instagram and Facebook and received a positive collective response, so he decided to keep doing it.

Luckily for Ron (and everyone following him), his walk-in closet was prepared with numerous Halloween costumes he'd made for himself after learning to sew years earlier. Ron continued putting on costumes, and his neighbor, Evan, continued taking his photo from a safe distance around the yard. His nightly project gained a modest following who enjoyed the creativity and humor in their feeds every night, further reinforcing his motivation to keep it up.

"It's given people some joy and something to look forward to," he says.

"The world is such a hideously ugly place right now, so let's bring some pretty things into it."

He drafted the hashtag #LiterallyHangingInMyCloset to reveal the reality of his situation; his costumes were, in fact, literally hanging in his closet and ready to be worn at a moment's notice.

The realtor by day became a nightly local fashion icon within a couple of weeks, earning dozens of enthusiastic followers who leave positive, encouraging comments on each post. After spending weeks resurrecting past costumes, the project evolved into something he considers a little more creative. He's now imagining original outfits and photographing himself inside his home, as well.

He says his more recent outfits remind him of when he was six years old and turned his grandmother's chenille bedspreads into gowns. He'd get in the shower, roll on the floor, and pretend to be Shelly Winters in the Poseidon Adventure.

"My poor family, they didn't know what to do with me as I was somewhat of a special child," he laughs.

The whole project, he says, has made him feel free, and he enjoys putting himself out there. During a time when physical human interaction is discouraged, it's given Ron and others something fun to do and experience from the safety of their screens at home.

"If it causes somebody to chuckle, right on. It's obviously a middle-aged gay man in a dress, which I think is hilarious," he laughs.