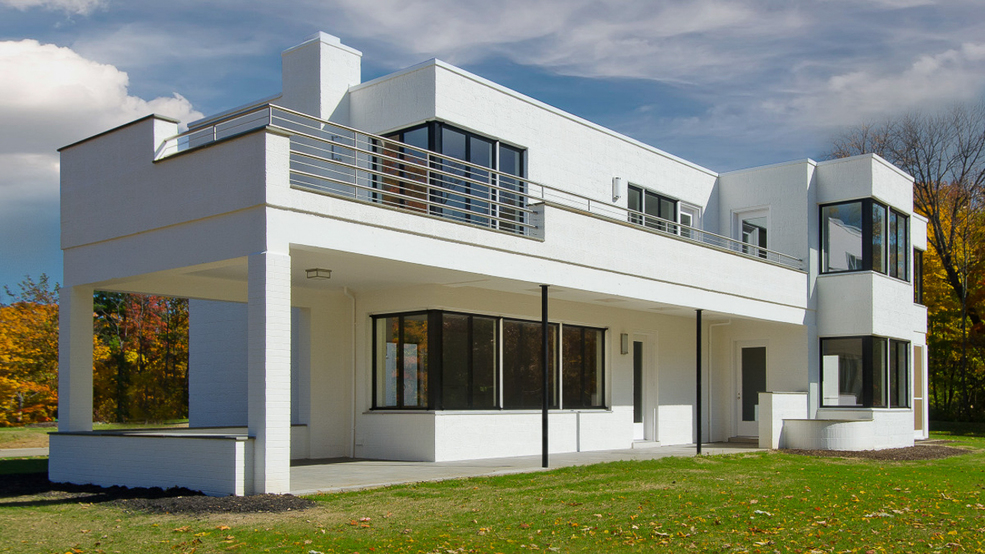 The Rauh House was built in 1938 for Frederick and Harriet Rauh in Woodlawn. John W. Becker, the architect, designed it in the International Style. It exists today as a monument to historic preservation and Modernism while also serving as a personal residence. / Image: Paul Muller, Cincinnati Preservation Association // Published: 7.12.18
SEE MORE

The Rauh House In Woodlawn Is A Historic Preservation Success Story

The Rauh House in Woodlawn is lucky. Very, very lucky.

Built 80 years ago this year, it stands today as a monument to historic preservation and Modernism while serving as a personal residence. However, the reason it still stands isn't solely because it holds historical significance or because its architectural style was radical for the era in which it was built.

As I said before, the Rauh House is lucky. We'll get to that in a moment.

Modernism is disregarded by many. It's not as ornamental as Italianate, Queen Anne, or Gothic and Greek Revival styles. It's usually asymmetrical and devoid of pitched roofs, elaborate molding, intricate corbeling, wainscoting, and many other components that define older styles. Because Modernism hasn't seemingly achieved universal approval in the mainstream, it's often more likely to become wrecking ball fodder.

Architect John W. Becker recognized the style was worth exploring early on. In 1938, he designed the house for Frederick and Harriet Rauh's newly purchased plot of land that encompassed nine acres in Woodlawn.

The all-white, two-story house featured large plate glass windows that looked out onto the forest that surrounded and secluded it. A patio and rooftop deck offered sufficient space to enjoy nature without straying far from the comforts of home. Landscaping by A.D. Taylor further enhanced the property's attractiveness.

It was unlike any other home in the area.

The Rauhs moved out in the '60s and the house underwent renovations that degraded its original design under subsequent owners. By the early-2000s, it'd fallen into extreme disrepair. And you know how the mainstream feels about Modernism; the wrecking ball was teeing up to bat the Rauh House off the map.

But as I said earlier, the Rauh House is lucky. Emily Pulitzer, who grew up a Rauh in the house, recognized the importance of her childhood home. She purchased the property and gave it to the Cincinnati Preservation Association (along with adequate funds) to restore it to its former glory.

Emily, as it turns out, had the right antidote to historic property demolition: respect. Had the Rauh House not been graced with someone who appreciated growing up within its walls with the means to save it, it would've met the same fate as many other Modernist buildings all over the United States. Thanks to her, the Cincinnati Preservation Association, and everyone involved in the restoration effort, a piece of Cincinnati history remains.

The Rauh House is a private residence and is not available for tour. Current-day and historic photos of the property are located in the gallery above.