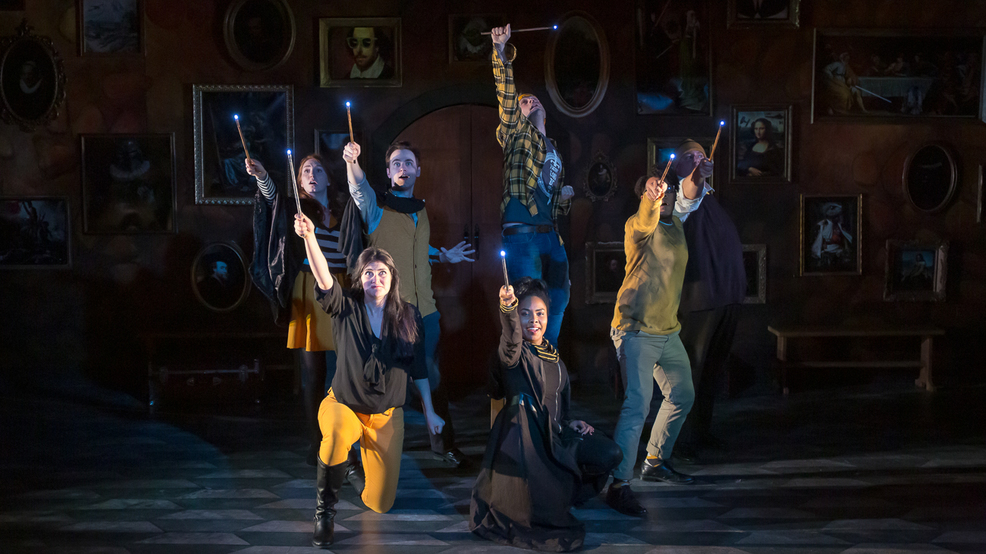 Know Theatre's latest and current show, Puffs or Seven Increasingly Eventful Years at a Certain School of Magic and Magic by Matt Cox, is all about a group of adolescent wizards learning about themselves, their abilities, and their (many) failures all while living in the shadow of Harry Po...uh, I mean...a very famous fictional wizard who happens to hail from the UK. Puffs is the third Mainstage production to kick off the theater's 22nd season themed around the concept of "The Fight." Five more Mainstage shows will follow it in the coming months.

[From the Know Theatre website] Heroes. Made. Not Born. Except sometimes they are born. On a gloomy night in a far away magical land called: England.

Follow a trio of friends, three Puffs, as they study magic at a school of female magic and male magic at the very same time as a certain famous boy wizard and his friends.

Magic, sports, and a battle against evil collide in a hilarious new play for anyone who’s ever felt like they weren’t the hero of their own story.

Short answer: If you love a certain pop-culture phenomenon that involves British wizards and a noseless villain played by Ralph Fiennes, Puffs' relentless references and inside jokes from that series is worth the price of admission alone.

Long answer: The high-energy cast and lightning pace of the show will instantly put you in a fantastic mood. From the moment the show begins, which plays out on an elaborate stage that seamlessly transitions from one moment to the next, not a second is spared getting right into the silliness. You realize quickly that you'll be cackling straight through to intermission, and you'll continue laughing until the final fade at the show's conclusion. It's dangerous to take a sip of your drink at this show; I'd highly recommend sitting in the very back row so the odds of someone moistening the back of your neck with their drink by way of their nose are significantly reduced.

Merritt Beischel's narrator character hilariously straddles the fourth wall, grounding the audience before beckoning them closer to the carnival of goofiness while simultaneously engaging the characters themselves. The entire cast deserves a lot of credit for playing as many characters as they do. As soon as they appear on stage, it's only moments before they assume the role of some other hilarious nutjob at the drop of a sorting hat.

A perfect example of this is Chris Wesselman, whose portrayal of lovable, bumbling J. Finch is merely one of the many characters he plays in Puffs. Wesselman is in and out of costumes left and right, always diving back onto stage to bring to life some outrageous buffoon that cracks up the entire theater, often including the cast. Wesselman's alter egos are partly improvised, too, leading to unique crowd-work that changes show by show. In other words, one of the funniest actors in Puffs changes their performance depending on the day and the crowd. I'm going to see this again just so I can see how Wesselman switches it up.

Be forewarned: if you're not at all familiar with the source material (those incredibly popular British wizard books and films), a good deal of the jokes may fly over your head. Having only seen the films once through several years ago, I still managed to have a great time watching Puffs, though.

Around 120 minutes with a 15-minute intermission in the middle.

Every Wednesday through Sunday from now until December 21st.

Directed by Andrew Hungerford, with lighting design also by Andrew Hungerford. The Scenic designer is Baron E. Pugh, the costume designer is Noelle Wedin-Johnston, and the sound designer is Douglas Borntrager. Puffs is composed by James Allen. Props and scenic charge by Kayla Williams, the stage manager is Meghan Winter, and the technical director is Henry Bateman. All the magical melees are choreographed by John Baca.