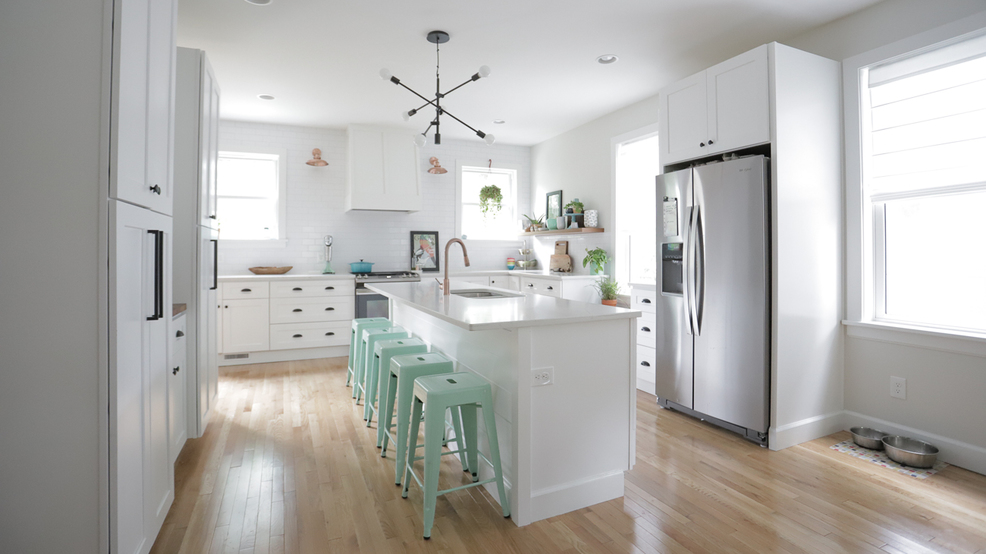 This Pleasant Ridge Home Got a Legendary Rehab Job

Here's the thing about Nicole Nichols: we can't stop writing about her. If she would just stop being so good at flipping houses, maybe we'd give her a break, but apparently that's not happening any time soon.

When she told us about how she's adding her personal home to the upcoming Pleasant Ridge Home Tour, we safely assumed she'd have something grand to show us before we even saw it ourselves. That's kind of how she rolls, after all.

Long story short, she delivered. The renovations she and her house-flipping company, Revival Designs, made to a 1,400-square-foot Pleasant Ridge home were so good, she actually convinced her entire family to uproot their lives in Oakley to move into it.

I'm sorry, I shouldn't say "updated." That's a bit misleading. Nicole Nichols straight up evolved/transformed/revolutionized the place. The photos in the gallery above (which you need to see for yourself) will illustrate this point more clearly.

But first, you should know where it came from before you understand where it went. That's what makes this renovation so impressive.

FROM BUNGLED TO BUNGALOW

Nicole and Revival Designs bought the old house sight unseen with the intention of fixing it up into a classic bungalow-style home that blends in with the surrounding older homes of the neighborhood. However, when Nicole finally saw the house herself, she regretted what she'd purchased. Its condition coupled with the poor layout of the house promised to be the most daunting job she'd ever taken on.

No headache is enough to stop Nicole, though. Of course she went big to resell the place.

They popped the top off the second floor and started completely fresh, adding an all-new second story. Downstairs, they knocked out walls and reinvented the natural flow from room to room. New concrete was poured, landscape was added, Nicole did the custom finishes herself, a garage was built, and all of the electrical, duct, HVAC, and plumbing was replaced. Plus, an entirely new front porch gave the facade a fresh face.

The whole process took 14 months of work. General contractor Joe Wood of All Around Joe, who she worked with on that fantastic Oakley home we covered last year, collaborated with Nicole for the project, proving once again that they're a formidable force in the world of house-flipping.

But something was different this time. Nicole had fixed up homes in Pleasant Ridge for years, but the Big Brick Bungalow (her nickname for it) was such an appealing prospect, she contemplated whether or not she wanted to live in it herself. With a baby on the way, the house seemed to be the perfect size for her growing family.

She bit the bullet and went for it. After falling so madly in love with one of her own projects, she unintentionally revived & designed her way to a brand new home.

Yes, I know. It's a shame none of us live in it. That may be a little selfish, but let's just be real about how it feels. After seeing all the work she's done in the past with her other jobs, it would be a dream to call a Revival Designs home just that.

There's good news, though. Remember that earlier point about how she added it to the Pleasant Ridge Home Tour on October 20th? You can see it for yourself that way. Tickets are $20 a piece at St. Peter’s United Church (6120 Ridge Road) on the day of the event. Kids 12 years old and younger are free.

More information about the Pleasant Ridge Home Tour, including times and parking information, can be found on its website.