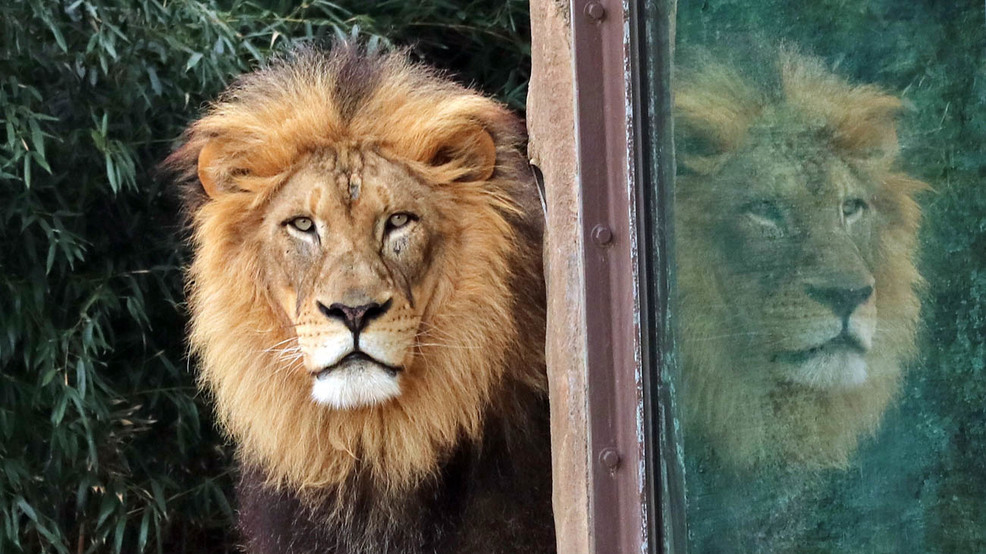 John the Lion is one of Larry's favorite animals to photograph at the Cincinnati Zoo & Botanical Garden. He's taken thousands of pictures of him over the last few years. / Image: Larry Thomas // Published: 1.16.19
SEE MORE

You know how you go to the zoo and expect to take epic pics of Fiona and all her animal friends, but when you look at them later, not even an Instagram filter will make them look post-worthy? That’s not the case for local photographer, Larry Thomas.

A life-long resident of Northern Kentucky and graduate of NKU, Larry has been fortunate to always live close to both majestic wildlife and incredible skylines (the buildings, not the food, people). These are Larry Thomas' favorite things to shoot as a photographer. He currently works in the media field as a manager for a division of the PPS Group in Covington—a group that produces films and video archiving.

Larry only got into photography as a hobby a few years ago (via a romantic path of sorts as you'll read below), but he would eventually love to turn it into a profession. Even though he’s just starting out, he’s already done photo sessions for friends and family, sold some of his work, and he's won several contests by the Cincinnati Zoo, such as the weekly “#cincyzoopic” and “Photo Caption Friday” contests. He’s also the proud recipient of a “Visual Storyteller” badge on the Cincinnati Zoo Members Facebook page. Out of all the styles he’s dabbled in, Larry says wildlife, cityscapes, and landscapes are his favorite areas of focus.

Cincinnati Refined: How did you get into photography?

Larry Thomas: I was dating a girl who took pictures at a race track. Seeing how excited she was talking about photography, I thought I would give it a try. It was love at first click. I've found the Zoo to be a great place to take pictures. It’s a mix of everything: big, small, light, dark, close ups, and animals nearly out of sight. The girl may have left, but my love of photography has blossomed over the last 4 years.

CR: What’s your camera and lens of choice?

LT: My first DSLR was a Canon T5. It was a great entry level camera and very easy to learn on. I have since upgraded to the Canon 80D. My telephoto zoom lens is on my camera 90% of the time. It’s pretty sharp and has image stabilization which is helpful when I’m not using a tripod. It’s the first lens I bought and I’ve taken tens of thousands of photos with it.

CR: How would you describe your photographic style?

LT: I would describe my photographic style as patient. If I am taking photos at the Zoo, it can sometimes take a while to get a good shot of a particular animal. When I’m taking photos of the skyline, waiting for just the right light is the difference between a good shot and a great shot.

CR: When you shoot at the Zoo, which animal is your favorite and why?

LT: My first stop at the Zoo is always the Malayan Tigers. The Zoo currently has three females: Batari, Chira, and Izzy. It’s been amazing watching them grow up and develop their individual personalities. Fiona's survival is an incredible story, but those tigers are simply stunning and just happen to be the three most genetically important Maylayn tigers in the country. I’m a dog person, but at the Zoo, my heart belongs to those big cats.

CR: Name a few of your favorite places to shoot around town?

LT: Cincinnati is a river town and down on the water is where I take the majority of my shots. General James Taylor Park in Newport and Riverside Drive in Covington both offer excellent views of the Queen City skyline. The SkyStar Wheel really needs to be permanent. I love what it adds to the skyline. The observation deck of the Carew Tower is also a must see.

CR: Most memorable/favorite experience while shooting?

LT: I actually have two. The first was the mother of the tiger cubs, Cinta. I had been trying to get a good picture of her for quite some time and she would always stay way back in her enclosure. Finally, on one rainy, cold, blustery afternoon, I was making one last stop by to see her when she just walked right up, laid down, stared at me, and let me get as many pictures as I wanted.

The other was when I was taking a video of John, the African Lion. He was slowly sneaking up on his enrichment—which looked like three large wooden thimbles. He carefully put his paw on it, which caused it to tip over and fall. It scared him and he jumped up and way back from them. He then looked around to see if anyone saw it and proceeded to growl at them a few times.

CR: What do you enjoy doing when you aren’t taking pictures?

LT: If I’m not taking pictures, I am usually doing something outside. I love going hiking, kayaking, and fishing down in the Red River Gorge area. I grew up playing in those hills and hollers almost every weekend and still have family that lives there.

LT: If you are taking a long exposure shot, adjusting the focus while the shutter is open can sometimes give your photos a starburst effect.

CR: Any tips for aspiring photographers?

LT: Take advantage of the Cincinnati Reds' “Fireworks Fridays” to get some fireworks photos. They put on a great show, and the fireworks are shot off from right in front of Great American Ballpark. Try to get your shots at the beginning of the show before the smoke builds up.

CR: What’s something that's still on your photography bucket list?

LT: The ultimate photo excursion for me would be a wildlife photo safari in the Maasai Mara National Reserve in Kenya. In the US, I want to photograph the Grand Canyon. Locally, I really want to take some shots from on top of the Roebling Suspension Bridge.

LT: Don’t be afraid to try something new. You might just find your passion

You can check out more of Larry Thomas’ work in the photo gallery above, or on his Instagram.