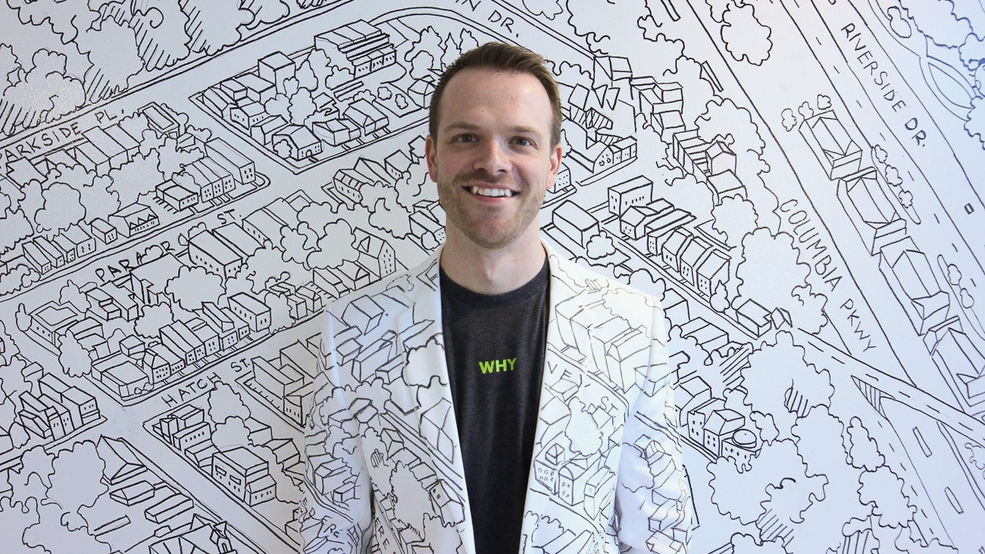 Phil Rowland (IG user @Cincy_Phil) is the creator of You Are Here, a project that mapped 20 square miles of Cincinnati from a birds-eye view with hand-drawn illustrations. He was the recipient of a People's Liberty grant and transformed their storefront into a 360-degree interactive art installation. Even after the installation was disassembled, You Are Here continues to pop up in various forms. / Image courtesy of Phil Rowland // Published: 12.26.17<p></p>
SEE MORE

by  Phil "No, not that Cincy Phil" Armstrong
View Gallery

Nary a week goes by where I'm not mistaken for Phil Rowland. We have similar account names on Instagram; he’s @Cincy_Phil, and I’m @CincyPhil (without the underscore). Because he’s a successful graphic designer and the recipient of a People’s Liberty grant, I’m often reminded of my place as the generic Kroger cornflake cereal to his Kellogg’s Frosted Flakes... a title I willingly and enthusiastically accept.

Compounding the confusion associated with our similar account names, our mutual interest in art, architecture, and the urban core does little to quell bewilderment or clarify our virtual identities. As such, getting confused with a successful person so consistently has been pure comedy.

I’ve received congratulatory Instagram messages for a People’s Liberty grant I didn’t earn.
I’ve received praise from newly-met strangers for drawings I didn’t do.
I’ve received commission requests and have had to redirect them his way.
I’ve even had one of Cincinnati Refined’s own freelancers get the two of us confused.

Yes, we are two different Cincy-livin’ Phils who enjoy similar things while running around in similar circles. But Phil Rowland is the one I want to talk about here, so let’s review the project for which he’s best known as of late

You likely know Oakley resident Phil Rowland due in large part to his You Are Here project. He received a People’s Liberty grant in April to cover the entirety of its storefront in a hand-drawn map of Cincinnati that encompasses 20 square miles of the area. The idea was to do everything in black and white, then invite people to interact with the art by coloring the empty spaces.

You Are Here was all over social media through its six-week run, due in large part to how creative and different it was. With its visually striking aesthetic and interactive premise, the project was a hit.

After the success of the People’s Liberty installation, someone from the Flying Pig Marathon gave Phil the idea to take the You Are Here brand on the move. With the help of Sarah, his wife, he hand-built an A-frame mobile coloring board, put wheels on it, and drew portions of the map onto it.

They took it to Oakley’s OFF Market at MadTree Brewing to give kids and their parents something fun to do while they shopped. Much like its 360-degree predecessor, it was also a hit.

Continuing with the theme months later, Phil and Renaissance Covington unveiled a mural he painted on 17 West 8th Street in Covington in early November. Keeping with the interactive theme, residents from the community primed the building on a cold, grey day, and Phil spent the next week covering the brick canvas with the map’s lines.

As a nod to the interactive component of the People’s Liberty installation, the mural’s design includes several happy children splattering colorful paint across sections of the map. An impressive perspective shot of the Roebling Bridge’s approach covers the building’s side.

WHERE WILL YOU BE NEXT?

When asked about the project’s future, Phil said, “There are a number of things in the works right now. Without being specific, the You Are Here maps may be finding their way into the brands of some Cincinnati companies in the following year.”

He’s also shown an interest in mapping his hometown, Columbus. “Ideally, we could connect with someone from Columbus' COSI. I think we would be a good match,” he said.

Whatever happens, I just hope I never stop being confused with this guy. It’s fun riding his coattails for that brief second before I need to take a cue from Mr. Rowland and map out the difference between us.