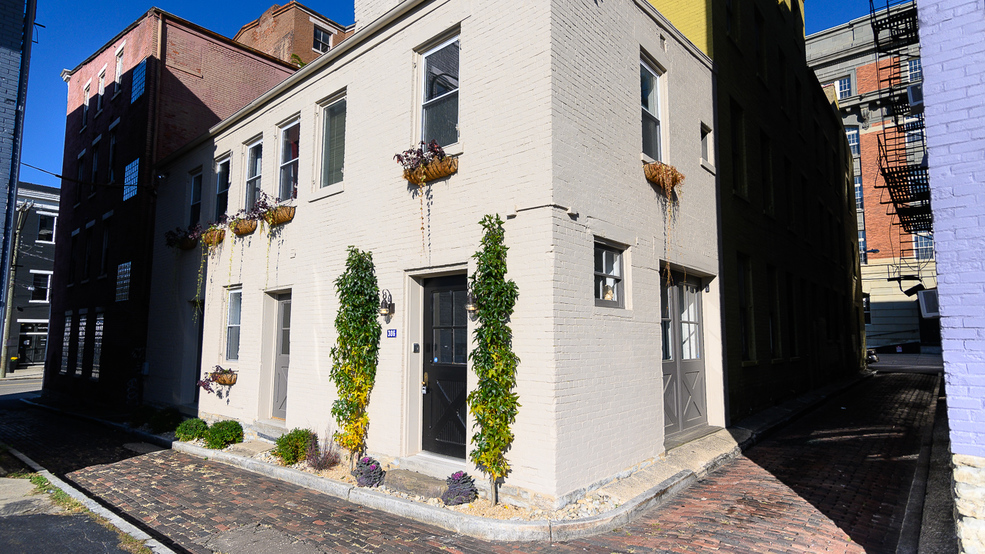 It's hidden off of Sycamore Street at the intersection of Grear and Von Seggern Alleys. It's plainly visible from the nearby parking lots, but isn't immediately noticeable from the main thoroughfares of Pendleton and Over-the-Rhine. / Image: Phil Armstrong // Published: 10.30.19
SEE MORE

Pendleton's Prettiest Airbnb Is Cleverly Hidden In a Well-Traveled Alley

With a hot cup of Urbana coffee warming the palm of my hand, I walked across the uneven bricks of Grear Alley toward Sycamore Street in Pendleton. As I approached the intersection, a tiny two-story house crept into view just beyond the swath of cars lining either side of the alley. The secluded, stout little house stood at the corner of Von Seggern and Grear. Bearing a curiously monochrome palette that contrasts well with its taller, more colorful neighbors, it immediately seized my attention. Had I stuck to the main thoroughfares of the neighborhood, I would've likely missed it entirely. Was this always here? I couldn't remember. The lighting was excellent at that moment, so I took a photo on 35mm film. When I developed the roll later, I saw the picture again and shared it to Instagram.

A couple of weeks later, the Carriage House's account took notice of my photo. Not knowing who or what the Carriage House was, I looked into it. As it turns out, I'd accidentally took a photo of a truly hidden little alcove of hospitality that day I walked Grear Alley after leaving the coffee shop.

As I soon learned, its owners, Christy Wulfson and Michael Guilfoil, purchased the building in June of 2018. Living in Los Angeles at the time, the two friends sought a side project in an up-and-coming downtown in another major US city and eventually settled on Guilfoil's hometown of Cincinnati. They intended to turn the former law office building, which had been vacant for years, into a place for the community. Its odd location at the crossroads of two alleys didn't lend itself well to a single-family home, but it was perfect for those seeking a comfortable place to crash after enjoying a night out in the neighborhood. Thus, they resolved to remake the building into a sleek, extraordinarily photogenic and functional one-bed, one-bath, 1,500-square-foot Airbnb.

Both Guilfoil and Wulfson are experienced designers, as well as former directors at Californian architecture firms and tech companies. They quit their full-time West Coast jobs and made the move to Cincinnati after realizing the Carriage House project would entail more hands-on work than they previously thought. Wulfson had done large-scale renovations for offices and commercial spaces before, but with a smaller budget and less hired hands than she was used to having, the house flip proved to be a particular challenge.

It took the duo months to find the right team. Big contractors wouldn't touch the job; it was too small for them. Guilfoil and Wulfson took to Angie's List to hire individual local contractors to help them with the electric, plumbing, and special hand-made finishes.

But they weren't just supervisors. Their DIY spirit and years of experience allowed them to design and build much of the Carriage House themselves. Guilfoil even built the entire kitchen himself from the ground up. In total, construction lasted from September to December of 2018.

"If you're just coming to party in OTR and need a place to crash or hang out beforehand, it's perfect," Wulfson says.

That's the most significant selling point for Airbnb-ers, especially those who made the wise decision to rent the Carriage House during BLINK 2019. No need to catch a cab home or worry about parking when over a million people flocked to the urban core.

It's not just a place to crash, though. Its beautiful design and unique layout do well to make it a pleasurable place to stay. On the first floor, a full kitchen surrounding a large island naturally feels like the beating heart of the home. A living room just off the side of the kitchen snuggles sweetly into a cozy, window-lined corner furnished with a plush couch and chairs. On the other side of the stairs, you'll find a moderately large room without more than a bench and a round table beneath a minimalist chandelier.

Upstairs, the eye candy sweetens. Emerald green tile hand-laid by Tim Gray immediately draws the eye through tall windows surrounding the bathroom. As you step into the room to admire the verdant wonder before you, an ivory clawfoot tub greets you. Somehow, without even showering, you feel cleansed.

"People love getting ready in here and having the light," says Wulfson.

Down the hall from the bathroom, a magnificent maroon and gold-trimmed bedroom awaits. This is where you notice the incredible herringbone floor laid by Rick Sodemann, which, according to Wulfson, was his first attempt at installing that style of floor. (Nice work, dude.)

The Carriage House has, understandably, been rented for the sole purpose of hosting photoshoots, both product and portrait alike. Wine tastings, wedding parties, and corporate brainstorming sessions have all found the alley-based Airbnb to be a perfect setting for their needs.

SEE IT FOR YOURSELF

It's incredible to think there are undiscovered wonders like the Carriage House just sitting in plain sight waiting to be found. Check out photos of the house in the gallery above, and visit its Airbnb listing for more information, including nightly rates.