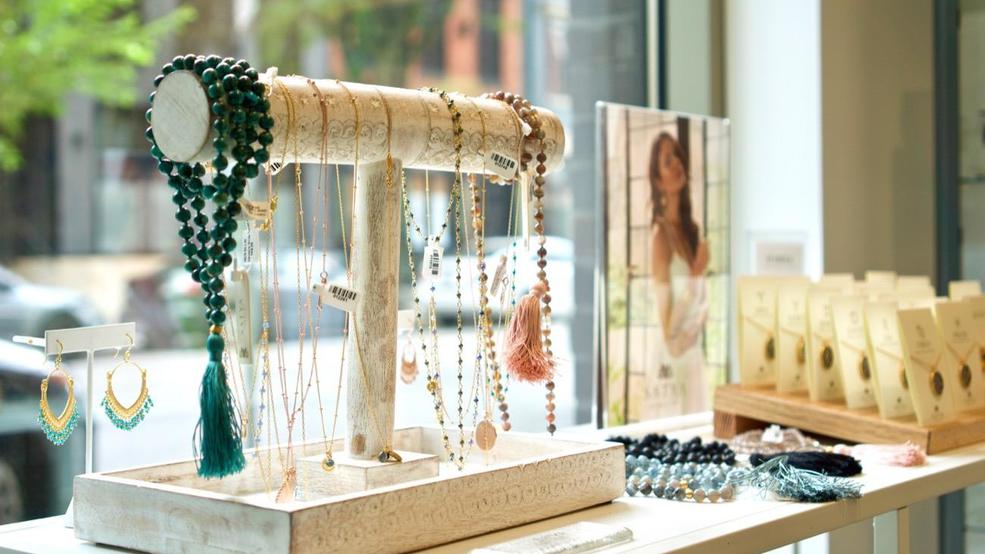 Jenna Shaifer is the owner behind Ombré Gallery who also has 12 years of experience in New York fashion industry. She currently vends pieces from over 70 artists internationally. The gallery’s mission is to exhibit the creative relationship between craft and fashion. ADDRESS: 1511 Race Street (45202) / Image: Brian Planalp // Published: 11.2.18
SEE MORE

Over-the-Rhine’s Ombré Gallery is an interesting place. They sell Lego, skateboard fragments, tiny rolled-up newspaper pieces, scales made of recycled plastic, and things that are even more unusual.

That is to say, they sell jewelry—some of the most alluring, unique, and beautiful jewelry around. Each one has a story, too, which owner Jenna Shaifer will gladly impart with all the friendliness of a Midwesterner and all the expertise of someone versed in the art of fashion.

Shaifer is not actually a Midwesterner. She is, however, a fashion expert. She worked in the fashion industry in New York for 12 years. Her resume includes the likes of Polo Ralph Lauren, Ann Taylor, Talbots, Donna Karan New York, and Isaac Mizrahi.

After earning her masters in decorative arts, she set her sights on the world of jewelry. When her husband’s work relocated them to Cincinnati in 2016, she began imagining her own storefront—a boutique that would showcase designs crafted from traditional and unexpected materials.

That is how Ombré Gallery came to be. Originally located in Oakley, Shaifer moved the shop to Over-the-Rhine in September 2018, and she’s been sharing the stories of her wares ever since.

They are not, technically speaking, her wares. Shaifer thinks of herself as more of a curator. She travels far and wide for the jewelry she showcases, sourcing from more than 70 artists in cities like New York, Munich, and Tel Aviv. She also finds fascinating new artists regionally, owing to the area’s numerous universities with renowned jewelry-making programs.

The name, a calling card to the fashion world, references the increasingly fine distinction between wearable clothing and meaningful expression. Put on those Lego earrings, that broach made from skateboard parts, that necklace of newspaper pieces, or that bracelet of plastic scales, and you’ll be an on-the-go Warhol, an everyday Modernist blurring the boundaries between life and art, authenticity and imitation.

It’s highbrow stuff, but Shaifer doesn’t get a high brow talking about it. That’s thanks to her charming personality, along with her deep affection for the jewelry she sells. You can tell it’s a labor of love selecting each one. You can tell she’s just as interested in turning out inventory as showcasing it in an aesthetically refined format.

The format is distinctly gallery-like. It eschews the clutter of the boutique in favor of white walls and a precise layout. At times, you even find yourself wondering if you’re missing the descriptions tacked to the wall, as you would find in a museum.

True to form, Shaifer has artist exhibitions every month. She even insists the artists come to Ombré for some face time with her customers, so meanings can be teased out, new understandings can be had, and folks can grow in their appreciation of an earring or a bracelet.

It’s another way she’s reinforcing the spirit of artistry behind what she sells, taming the gradient between high fashion and things you’d wear every day.