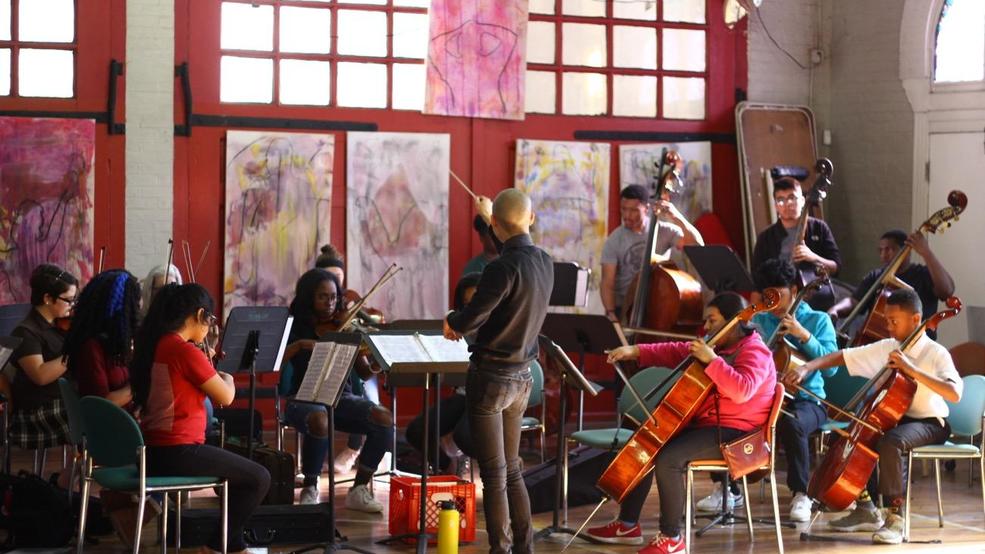 As I walk towards the old Warsaw Avenue Firehouse — a stately building of red brick, wrought iron, and stone carvings — a snare drum’s rap-tap-tap wafts from an open window, followed by laughter.

Now in its seventh year, the MYCincinnati Youth Orchestra is an after-school music program for underserved kids in the Price Hill neighborhoods. It is modeled after El Sistema, a youth orchestra in Venezuela, and welcomes kindergarteners through high school seniors.

What started as 11 students practicing in the Roberts Academy school library has blossomed into 120 students sounding off in a labyrinthine firehouse, a partnership with the Cincinnati Symphony Orchestra and collaborations with musicians like Jens Lekman and Napolean Maddox.

The ambitious musical agenda plays second fiddle, however, to the program’s larger goals.

“When we’re all playing in orchestra together, we’re all in the same musical space,” says Director Eddy Kwon, a 28-year-old violinist, composer, and conductor who graduated from the University of Cincinnati Conservatory of Music. “Music gives us that vehicle where 100 people can work together towards a single goal.”

To that end, Kwon started the Ambassador Ensemble in 2014. It is a space in which he and a small group of kids wrestle with personal identities and issues of social justice and equity and use those discussions to fuel their creative expression.

“There are limits to what music can do, what any one person can do,” he says. “What we can accomplish is to create a model of a community that we can live in.”

One member of the ensemble is Zayid Tooles, who has been playing bass with MYCincinnati for five years. The School for Creative and Performing Arts senior says this experience is partly why he wants to study music education in college.

“I have this thing about teaching kids that don’t want to be taught,” he said.

Working with kids is never easy, but it’s worth it, says Kwon.

“You can’t cut corners when it comes to making relationships,” he says. “That’s the core of why MYCincinnati works: everyone on the staff gives that sort of attention and care to the students.”

That’s why, after rehearsal ends, many instructors stick around, running through difficult passages again or helping students with their homework — whatever they need to thrive.

Additional background and information can be found on the MYCincinnati website.