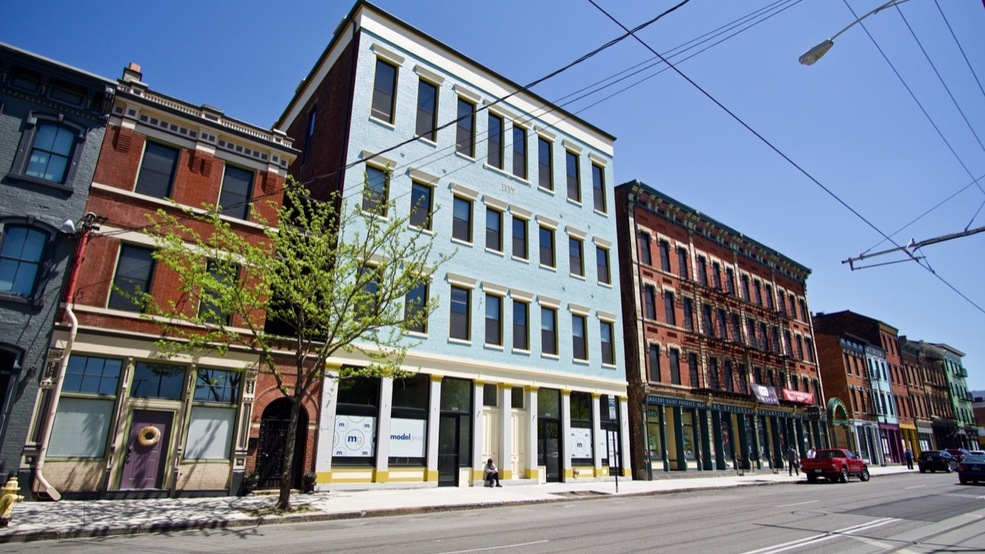 Market Square is a multi-phase project still underway. It involved the purchase and redevelopment of buildings around Findlay Market, including those along Race Street to the east and Elm Street to the west. When complete next year, a built-out market district will surround Findlay, and it’ll be a sight to behold. / Image: Brian Planalp
SEE MORE

And now for something you’ve definitely never heard before: What’s happening in Over-the-Rhine—what has happened, what will continue to happen—is nothing short of huge.

For that, of course, we have to thank 3CDC, the nonprofit redevelopment corporation formed by Cincinnati’s corporate stewards in 2003. Yet behind (and around) their work stands the work of a few enterprising developers, including Model Group. In fact, Model’s interest in Over-the-Rhine predates that of 3CDC. And while its project umbrella includes many in the core area of 3CDC’s focus, it also stretches into the neighborhood’s most intriguing new enclaves—Broadway Square and Findlay Market.

Over-the-Rhine’s stock of affordable housing was in pretty rough shape in the early 2000s. It was housing of last resort, much of it empty and blighted. Model’s insight was to leverage Low Income Housing Tax Credits, not simply to patch things up or create more of the same, but to gut and rehabilitate the existing stock with high-quality materials. In the case of the Gateway Quarter, where Model rehabilitated eight affordable housing developments between 2003 and 2008, the results looked like market-rate housing outside and in, yet they remained affordable.

Real market-rate housing was added as the neighborhood’s upward trajectory became apparent. Yet Model hasn’t abandoned its goal of making affordable housing that’s indistinguishable from market rate. The two should be able to sit beside each other without you ever being able to tell which is which, so they say.

That brings us to 2016, when 3CDC unveiled a massive $128 million residential expansion in Over-the-Rhine that would add 550 units, most of them affordable housing. Model remains a key partner in this undertaking, with its first fruits being the Albington on Race Street just south of Liberty. Previously vacant and blighted, Model renovated the buildings to include 50 affordable units.

Now comfortable in its role of neighborhood revitalizer, Model turned its attention to Pendleton in 2013. There, they planned a three-phased mixed-use development called Broadway Square with hundreds of market-rate residential units, several restaurants, a coffee shop, and business/startup space.

Amazing when a good plan comes together, isn’t it? It is at the intersection of 12th and Broadway where Model’s redevelopment plans have resulted in (I kid you not) the most beautiful street corner plaza in the world. The businesses are there, including a branding studio, a wedding photographer, a realty group, a law firm, and an architecture studio. Also present are Nation Kitchen & Bar and Urbana Cafe, not to mention new favorites Boomtown Biscuit Bar and Lucius Q together with soon-to-be favorites Three Points Brewery and a yet-unnamed creamy whip.

Ba-da-bing, ba-da-boom. Model hit it out of the park here. It’s as active, energetic, vibrant, and beautiful as any place in Over-the-Rhine.

Blah blah blah, “as beautiful as any place in Over-the-Rhine” except for Findlay Market, which Model has flanked with two stunning mixed-use developments under the heading of Market Square.

Market Square’s first phase was announced in 2014. It involved the purchase and redevelopment of nearly every building along Race Street to the east of Findlay Market. Scaffolding came down from the last of said buildings last month to reveal the entirety of the project’s scope: 35 residential units, 50,0000 square feet of commercial space, and tenants such as Deeper Roots Coffee, Epicurean Mercantile Co. (alongside its fabulous restaurant, The Counter), Streetpops, and Cherbourg Bakery.

The second phase of Market Square got underway just last year and is similar to phase one, though it’s unfolding on Elm Street rather than Race. That is, it’s adding double the residential units and double the commercial space, with an added emphasis on office uses.

When complete, sometime in 2019, the different phases of Market Square will be a thing to see, complete with mixed-use and mixed-income properties surrounding an incomparable public space. Findlay Market will become a market district, the likes of which neither you nor I could have imagined eight years ago.