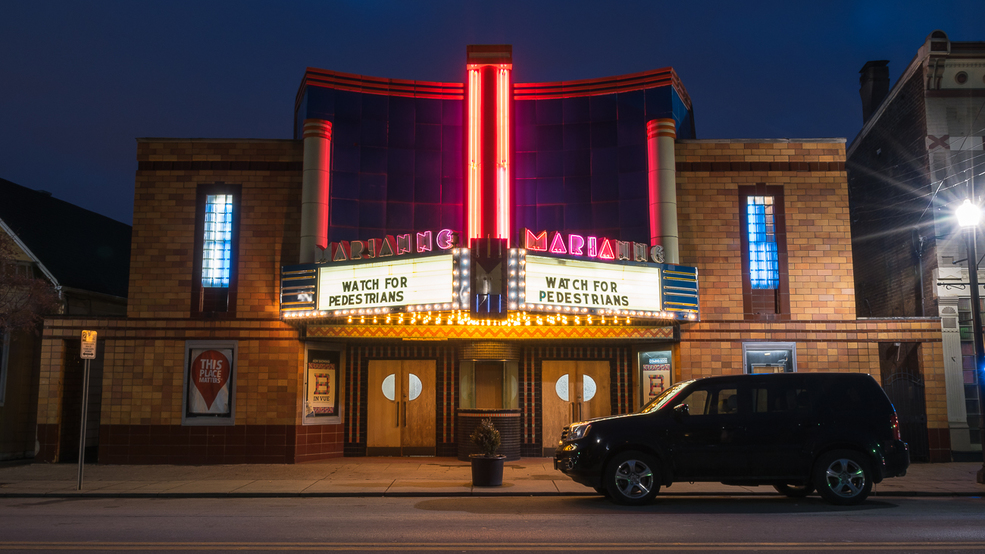 The Marianne Theater is an Art Deco, single-screen movie theater that dates back to 1942. It served as a movie theater until the late-1990s when it closed. For roughly 20 years, the Bellevue, Kentucky building sat empty until Kent Hardman began leading the charge to redevelop it into a multi-purpose event venue, pub, and entertainment hotspot. It's in the preliminary stages of renovation. ADDRESS: 609 Fairfield Avenue (41073) / Image: Phil Armstrong, Cincinnati Refined // Published: 2.22.18
SEE MORE

Bellevue's Marianne Theater Is A Shuttered Cinema Treasure That&rsquo;s About To Get A Sequel

Earlier this month, I learned something important about Northern Kentucky. A couple of photos posted on social media and over 100 strangers' likes and comments later, I realized how unbelievably passionate the people of Bellevue are about their Marianne Theater.

While those are all plausible factors, I think the real reason is something more significant. Something intangible and undesigned.

The Marianne Theater was designed to tell Hollywood's tales, but over the course of a half-century, it unknowingly accepted the role of a lifetime as a major character in many of Bellevue residents' own stories.

The Marianne was built in 1942 during the height of WWII. Household televisions were expensive at the time, and the U.S. was only manufacturing several thousands of them before production halted that same year to allocate resources to the war effort. Cinema thrived in single-screen movie houses like the Marianne, and Bellevue (as well as the surrounding region) suddenly had a new source of entertainment.

With a seating capacity of 542, the Marianne played host to many theater-goers at once, making a single sold-out show not only a packed house, but a community event.

Though television sales skyrocketed in post-war America, theaters still proved popular for many decades to come. So popular, in fact, that multiplexes began popping up in the 1960s, which led to the eventual decrease in popularity of single-screen movie houses like Bellevue's little Art Deco treasure.

Though it tried maintaining steady business by eventually transitioning into a second-run movie theater, the Marianne Theater's doors closed for the last time in the late-1990s.

Roughly 20 years have passed since a movie played in the Marianne. However, a new feature is planned to grace its silver screen in the near future.

Kent Hardman, a real estimate developer and the mind behind other successful local historic renovations such as Fireside Pizza and the Jackson Theater, is spearheading a plan under his Hive Properties brand to restore Bellevue's crown jewel.

The Marianne Theater is planned to become an event venue akin to Oakley's 20th Century Theater and Mt. Lookout's The Redmoor, but at a middle market price point. Utilizing the space's unique theater features, exclusive in-house events are planned too. For example, imagine a The Big Lebowski screening with a special on White Russians at the newly-renovated bar.

Not only will it be rentable and feature unique entertainment, but it's also poised to serve as a live music venue as well as a local bar.

Because of its location on the main thoroughfare of Bellevue, the Marianne will open as a neighborhood pub with craft beers on tap at its horseshoe bar. As a bonus, a ceiling-mounted projector will be used to show sporting events, movies, or whatever else it deems worthy.

Additionally, the kitchen will serve a modest menu of quality items, such as hot dogs, pizza, and milkshakes.

When it reopens, I have no doubt locals will flock to see their beloved theater once more based on the memories people left on social media after I posted photos of the Marianne.

"I remember in 1961 and 1962 going there. ... We had very little money and this was a special night out for us that we could afford once every week or so," a former theater-goer said.

"I spent half my teenage years there," another whimsically remembered.

Other comments followed similar templates, dipping into sentimentality at various levels of specificity—mentions of first dates and first jobs chief among them. Though many nostalgically recalled their past with the theater, a Bellevue resident named Bradley McLaughlin had a special suggestion for its future.

"I think the last movie shown there was U.S. Marshals. At least that was the last poster. I always felt strongly that Tommy Lee Jones needs to be part of the grand reopening since we had to see his mug for so long fading in the sun."

The Marianne Theater is located at 609 Fairfield Avenue (41073) in Bellevue, Kentucky. Info on Hive Properties can be found on its website.