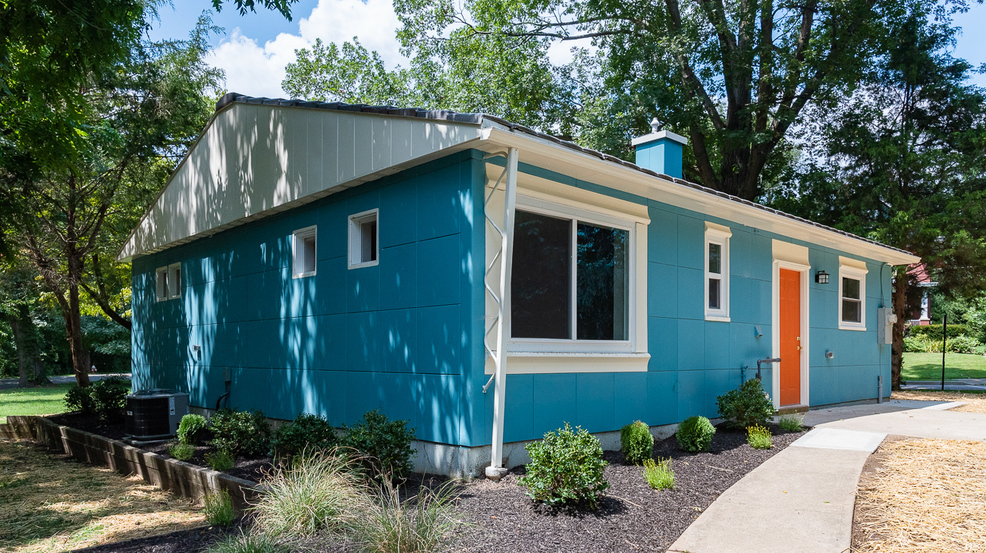 Lustron homes were manufactured in the late 1940s to solve a housing shortage after American soldiers returned home from fighting WWII. The houses were designed to be affordable and virtually maintenance free due to being built with enameled steel wall panels, a metal roof, and porcelain-enameled features. While the original plan was to mass-produce the homes, the company shuttered by 1950 and only 2,498 Lustrons were ever built. Ohio has around 200 of these homes, and one of them was recently restored in Wyoming. ADDRESS: 53 W. Mills Avenue (45215) / Image: Phil Armstrong // Published: 8.15.19
SEE MORE

I'll get to the Cincinnati connection in just a moment, but first, some quick background...

In the mid-1940s, America was kind of hung up on fighting and ending the biggest world war since the first one 20 years earlier. Thousands went overseas to squash the Nazis along with the rest of the Axis Powers, and the government realized all those Joes needed a place to live after they returned home. Due to how inefficient home building was up to that point, a company called Lustron promised to "Fordize" the housing industry after the war was over.

Their idea was to manufacture modest, well-built homes using standard materials on an assembly line to mass-produce large quantities of houses at minimum cost. The building materials would then be loaded onto a Lustron truck and shipped anywhere in the US. Seeing an opportunity to solve the housing shortage, the government gave Lustron $15.5 million and the keys to a plant in Columbus that had previously been used to build fighters during the war.

In a time when America wanted a fresh start and post-war optimism flooded our collective spirit, the ability to crank out affordable, pre-fabricated housing using an organized, efficient process was a tantalizing prospect.

Lustron homes were designed with enameled steel panels affixed to a steel frame on a concrete slab. Porcelain-enameled window frames, doorjambs, and other features enabled the house to remain nearly maintenance-free. The roof was made entirely of metal but didn't rust. Architects designed 20% of the interior walls with built-in shelves and added an all-electric kitchen that included an Automagic—a combination dishwasher & washing machine.

Long story short, the company didn't survive into the 1950s despite the high demand for homes. Delays, high production costs, and myriad other factors, as well as the government ceasing its funding, ultimately put an end to production. As a result, only 2,498 Lustron homes were ever produced.

So why are we talking about late-1940s, pre-fabricated Lustron homes manufactured in Columbus? Simply put: Cincinnati has them, and at least one is still standing on a street corner in Wyoming.

And not only is it still standing, but it's arguably never looked better.

To be clear, I'm talking about Wyoming the nearby city, not the state. 53 W. Mills Avenue is a corner lot with a Lustron home set a ways back from where the streets converge. When it was initially constructed in 1948, it featured all the hallmarks of the standard Lustron home mentioned above. However, over the ensuing decades, the house slowly deteriorated, but not beyond repair.

It was acquired by the Homesteading & Urban Redevelopment Corporation (HURC) in April of 2018 using the National Community Stabilization Trust, and work began to renovate the barely-over-1,000-square-foot, 2-bedroom, 1-bathroom house to suit a modern market. However, because of its uniqueness, not all of its post-war blueprint was redrawn.

The exterior was almost entirely preserved. Its enameled steel panels and roof were refreshed without being replaced. The interior floorplan was primarily kept the same, too, though the finishes, flooring, walls, and ceiling were redone. The built-ins were removed, and the utility area was walled off from the kitchen. Though the house's original heater lasted for 50 years, it was replaced with a new one.

Overall, the home maintains its now-historic 1940s Lustron look from the curb but has an updated interior that reflects 21st Century tastes. It's truly a special Cincinnati home even despite it being intended as a mass-produced model when it was manufactured.

For more information about Lustron homes, check out this resource.