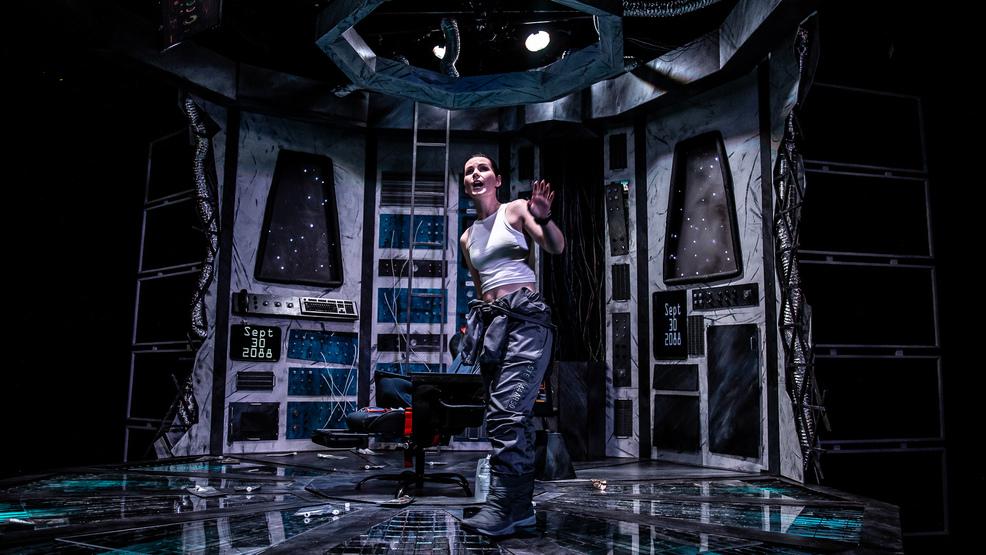 'The Absentee' Is a Sci-Fi Story About Love, Loss, and Voting In the 2088 Election

Know Theatre's latest and current show, The Absentee by Julia Doolittle, is a science fiction story about queer love, overcoming grief, and voting set over 60 years in the future. The Absentee is the second Mainstage production of the theater's 22nd season themed around the concept of "The Fight," which kicked off with Girl in the Red Corner in July. Four more Mainstage shows will follow it in the coming months.

[From the Know Theatre website] Far out in the Milky Way, “Beacons” serve as lighthouses for warping spaceships around the galaxy. When a U.S. Space Forces ship explodes near Beacon 44.AR.90, its Operator finds herself alone in deep space with only her ship’s A.I. for companionship. That is, until a persistent canvasser calls, desperate to convince her to vote absentee in the 2088 election.

Short answer: The show's futuristic-yet-realistic set is a feast for the eyes while the performances by the small four-person cast captivate from start to finish.

Long answer: The Absentee is a rollercoaster of emotion from start to finish. A little bit comedy, a little bit drama, The Absentee fits both at once without lingering too long in either genre. The protagonist's humorous intro segues smartly into revealing her more somber background, adding layer after layer to her character with every scene. And with a small cast of four actors, the audience has ample time to dote and dwell upon each personality and the important piece of the puzzle they add to the picture.

Excellent performances aside, it's the set itself that rockets the viewer without hesitation into believing the architecture of the narrative. Screens alight, set pieces move, lights strobe, speakers blast—the ambiance is just what the show needs to sell the science fiction without being a distraction. Though the year is 2088 in the story, The Absentee still feels rooted in a reality the audience knows thanks in large part to its realistic set.

By the end of the show, I was on the edge of my seat with eyes glued to the stage. The Absentee was utterly captivating from beginning to end.

80 minutes with no intermission.

Every Wednesday through Sunday from September 14th to October 5th.

Get those tickets below.