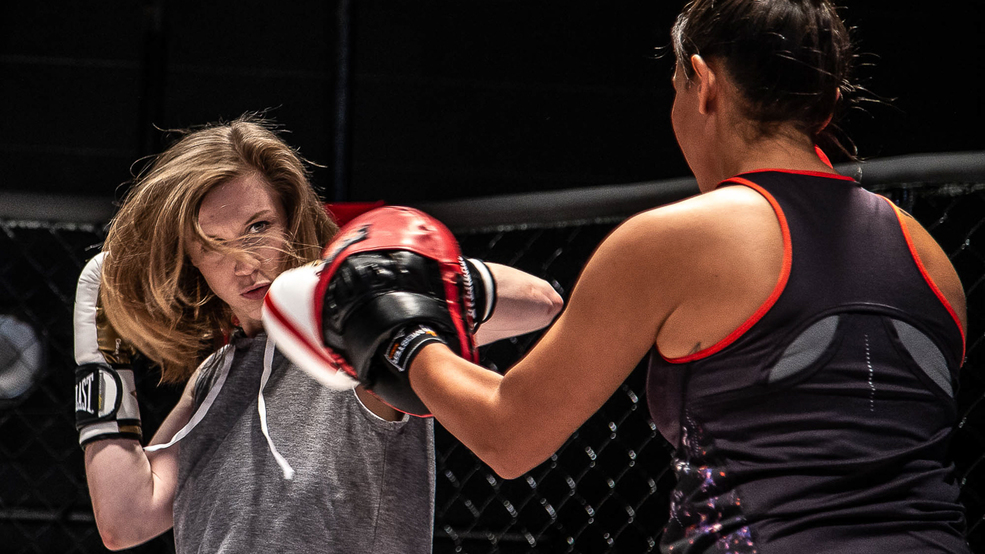 Know Theatre's latest and current show, Girl in the Red Corner by Stephen Spotswood, is all about one woman's fight to change her life after delving deep into the world of mixed martial arts. Girl in the Red Corner is the first Mainstage production to kick off the theater's 22nd season themed around the concept of "The Fight." Five more Mainstage shows will follow it in the coming months.

[From the Know Theatre website] Unemployed, fresh off a dead-end marriage, and searching for a way to take control of her life, Halo walks into a gym and signs up for mixed martial arts lessons. Her trainer thinks she’s a light-weight. Her mother and sister think it’s just plain weird.

Very quickly the lessons she learns in the ring bleed into the rest of her life and Halo finds herself battling against everyone around her. As she prepares for her first match, Halo realizes that life inside the cage and outside the cage are disturbingly similar. And that the only way to survive either is to fight.

ONE REALLY GOOD REASON YOU SHOULD GO

Short answer: The fight scenes were choreographed by a professional stage combat director and an MMA trainer to make the show as convincing as possible.

Long answer: Not only does Girl in the Red Corner promise a set cleverly designed to expertly sell the visuals of Halo battling it out in the ring, but legendary stage combat director k. Jenny Jones choreographed the fight scenes with help from local MMA trainer Jeremy Pender to make it as realistic as possible. That means anyone, regardless of their experience (or lack thereof) with mixed martial arts combat, will be blown away how the actors take their physicality to the mat. That immersion makes for an incredible show.

Two hours with a 15-minute intermission in the middle.

Every Wednesday through Sunday from now until August 17th.