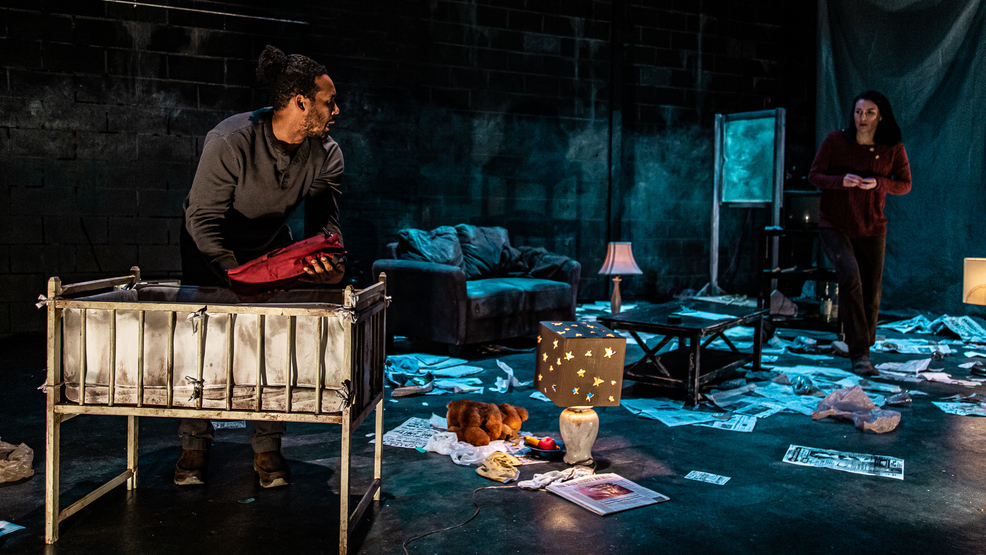 Know Theatre's latest and current show, In the Night Time (Before the Sun Rises), is about how two people grapple with the harsh reality of living in a dangerous world after bringing a new life into in over the course of one long, unforgettable night. In the Night Time is the fourth Mainstage production to kick off the theater's 22nd season themed around the concept of "The Fight." Five more Mainstage shows will follow it in the coming months.

A baby cries. A bottle breaks. A window smashes. In the small hours of the night, a couple tries to soothe their screaming infant—but as the hours grow longer, the world becomes elastic around them, and the horrors that scar our planet threaten to crash into the baby’s room.

Should they ever have brought this child into such a wounded world?

Short answer: In the Night Time speaks hard truths with surgical precision, viciously opening the viewer with the scalpel in one hand before immediately stitching them back up with the other.

Long answer: In the Night Time deftly defies theater-going expectations by deploying a unique narrative style that draws us into its world and holds us there while everything wavers in the face of uncertainty. Brandon Burton and Elizabeth Chinn Molloy confidently dive into their roles, instantly persuading us to believe their lengthy past as a couple who met in a bar (or a street) within the first act. This world-building feels full and fleshed out even before it segues neatly into the present with the birth of their newborn baby. As they experience deprivation of sleep due to their fussy new responsibility, all their fears about the future of the world begin to vigorously rattle their psyche—as well as ours.

Burton and Molloy take turns weaving together a bleak, scary world with biting honesty that's strategically interrupted by authentic, relatable human moments to raise and lower the mood in the same breath. As quickly as we are crushed by the concept of the violent death of a person or the irreversible effects of climate change, we are given the chance to briskly laugh it off before we’re gut-punched with reality once more. That rollercoaster of emotion is what defines In the Night Time, and it’s easy to appreciate how moody dialogue with sky-scraping peaks and subterranean valleys feels completely unencumbered when Nina Segal’s script is so razor-sharp.

By ending on a message of hope, the show offers us all the opportunity to acknowledge our fears so we can take a step toward fighting back against the brutality and saving the world we call home. There’s little doubt you’ll leave Know Theatre in a thoughtful, introspective state after seeing In the Night Time, which is exactly why it's worth the price of admission.

60 minutes with no intermission.

Every Wednesday through Sunday from now until Saturday, February 8th

Directed by Brant Russell, with scenic and lighting design by Andrew Hungerford. Costumes are designed by Noelle Wedig-Johnston, and the sound design is by Douglas Borntrager. Kayla Williams is responsible for prop design and scenic charge, with stage direction by Meghan Winter and technical direction by Henry Bateman.