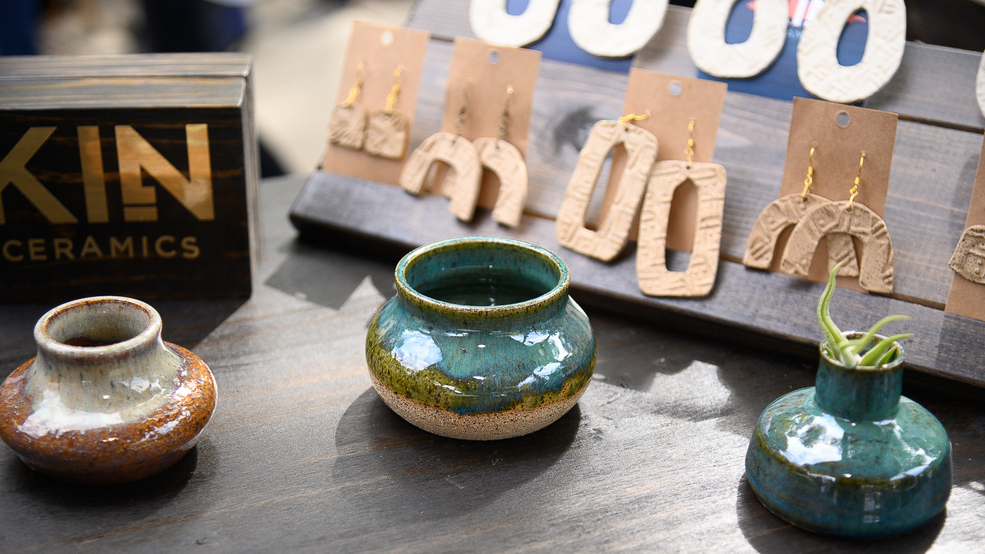 A Local Woman's Passion For Pottery Gives Back to Women Everywhere

Dana Makstaller is really, really great at making pottery. Every piece she makes (or throws, if you're pottery lingo-savvy) is handmade, with small imperfections that make them all totally unique works of functional art. She makes kitchenware, vases, jewelry plates, planters, wall art, and more.

Essentially, if it's a statement piece, Dana's made it. She's driven to create things she'd want in her own home. That's why the inventory of her small business, KINceramics, is so good: it's made with genuine passion.

Dana mainly works out of Walnut Hills' Core Clay—a massive facility where potters and artists usher their ideas into reality using a combination of clay, tools, and years of expertise to do it. And while Dana's been interested in pottery since her high school days, she hasn't always kept up with it. In fact, KINceramics is barely a year old at the time of this writing.

As previously mentioned, Dana was introduced to pottery while in high school. When she went to college, she kept up with it, enrolling in classes that allowed her to further perfect her technique.

"It just kind of clicked for me. It was a place where I could quiet my mind," Dana reminisces.

The artform blended with philanthropy during her senior year of college when she was asked to lead a bowl-making event for charity. Her love for pottery reached a whole new level when she realized it could be used for a good purpose.

But despite this, there was a time in Dana's life when pottery wasn't part of her daily schedule. For about six years after completing undergrad, she stopped throwing entirely. At first, a demanding grad school schedule prevented her from creating. Later, a toxic relationship wherein she was emotionally abused ruled her life. Eventually, Women Helping Women (WHW), a social services organization that seeks to prevent gender-based violence while assisting survivors, helped Dana get out of her relationship. She sought therapy thereafter to begin healing.

As she continued healing, she sought a creative outlet and noticed Core Clay in Walnut Hills offered pottery classes. Seeing an opportunity to reconnect with her passion, she enrolled, filling her evenings and weekends with pottery while she worked by day as the Director of Client Services for Rebel Pilgrim.

"It was kind of crazy, the muscle memory that came back," Dana says. She relearned how to center, pull a cylinder, make bowls, and throw plates all over again.

"When I came back to [pottery], it was like finding the piece that was missing," she says.

Throwing at Core Clay became a safe space for her where she could focus on her craft instead of living so far into the future. An extrovert by default, pottery gave her time to be with herself. It required her to concentrate on the present, to quiet her mind again like it did years before.

After her best friend, Lauren, encouraged and generously donated a gift certificate to Core Clay to start her own small business making pottery part-time, Dana founded KINceramics. Believing everyone's "in this together," KIN is another word for family and also serves as a play on words for kiln—the oven that fires pottery. That notion of solidarity as it relates to pottery ultimately allowed her to feel comfortable talking about and working through her emotional abuse.

It's not solely about her, though. Through KIN, she's helping others, too. Because of the role Women Helping Women played in her own life, she's giving 10% of her profits made every year back to their organization so they may continue to help women in similar situations.

It's a lesson she learned in college when leading the pottery-for-charity event long before her passion ever escaped her. It's a message to everyone that, even if they don't practice something they once enjoyed doing before, it's never too late to pick it back up where they left it.

"KIN is a story for me. I want it to be a space where people ask questions," she says. "The more I can talk about my experience and talk about coming out on the other side, the more we can normalize those conversations."

As I said, Dana is really, really great at pottery. The photo gallery above illustrates all of her beautiful work.

She does shows each year where she has her own booth at events like City Flea. Additionally, she sells all of her handmade works of art on her Etsy shop online.

Visit Dana's Etsy shop online, and check out Core Clay if you have an interest in taking pottery classes.

For more information about Women Helping Women, visit their website.