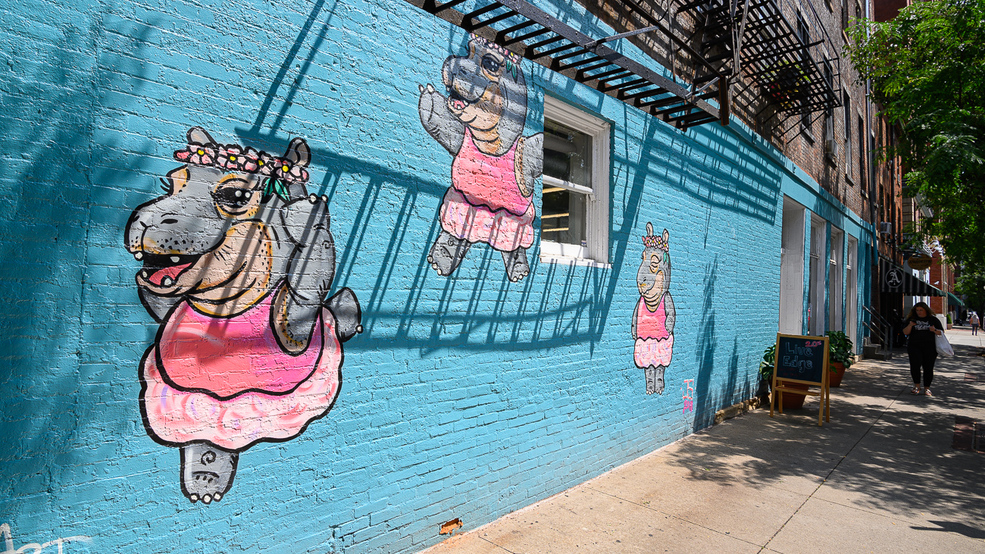 The ballerina Fiona mural was done around the time of Fiona's first birthday. Josh painted Fiona as a ballerina in a series of poses to inspire passersby to mimic her for photo opportunities. The aqua blue wall and cotton candy pink tutus help the mural pop. / Image: Phil Armstrong, Cincinnati Refined // Published: 8.10.19
SEE MORE

Josh Stout Wants to Paint a Mural on Your Wall

As an independent artist, he set a personal goal to do 19 murals on 19 walls in 2019 without any organizational support. In other words, Josh Stout is just one artist on a quest to beautify the Greater Cincinnati area by hand-painting as many murals as he possibly can.

Of course, seeing murals around town isn't a new phenomenon. Cincinnati is loaded with large-scale murals, primarily because of ArtWorks' program. The organization has covered blank walls around the city with new works on an annual basis for over a decade. And while ArtWorks does a phenomenal job of creating and maintaining their murals, sponsoring one isn't within everyone's budget.

That's where Josh comes in. He looks at your wall and comes up with a design he wants to paint, presents his design to you, and if you're on board, all he asks is that you approve his design and cover the cost of his paint. He doesn't charge for his time or talent, making sponsoring an original piece of art more achievable.

So why is he doing murals for the mere price of the paint it takes to create them? It all started with BLINK.

He worked with students on the 2017 BLINK parade and witnessed first-hand the positive impact art had on their lives. That experience made Josh think about how much beautification projects like murals would've meant to him while growing up on the West Side. As a result, he set out to paint murals as a way to spread art in an accessible and inclusive way without requiring more than permission and a few dollars for supplies to do so.

"I started with the idea of doing a few murals at cost, but that seemed like the easy way out, so I set the lofty goal of 19 in 19. I still have a ways to go, and this may turn into 20 through 20, but I'm going to give it my all to make it happen," he says.

And though he's not finished with his goal of 19 murals this year, he's already done quite a few. Algin Retro, a furniture retailer downtown, has already given him the chance to enhance their look with three different murals: a mural that features three hippo Fionas dressed as ballet dancers along 8th Street, and two stylized superhero murals around the back of the building that can be seen from the alley.

Not all of his work is confined to downtown, either. Stringtown Bar & Grill in Florence let him paint a mural on their building—a design that blends Florence's signature relationship with "y'all" and Looney Tunes.

His work can be found in private areas, as well. Josh, a former Chamber of Commerce employee, did a mural inside their 4th Street office while he still worked for them.

He doesn't wish to wait for the proverbial paint to dry, either. Josh's relationship with murals is partly what drives him to keep doing them.

"Being an artist is funny (or maybe it's just me), but I'm always very doubtful when I start a mural. I'm completely entranced and happy while painting, and when I finish, it's a mixture of satisfaction and depression. I am proud of what I've done and immediately send pictures to my wife, but there's also this weird bit of sadness that comes with it being over," he says. "That lingers a bit until I start plotting the next one."

19 in 19 is a lofty goal, but with the desire and drive Josh has to keep creating, all he needs to accomplish it are a few good walls and willing participants. If you or someone you know owns a building with a blank wall that could use some love, feel free to contact Josh directly about classing it up with a hand-painted mural.