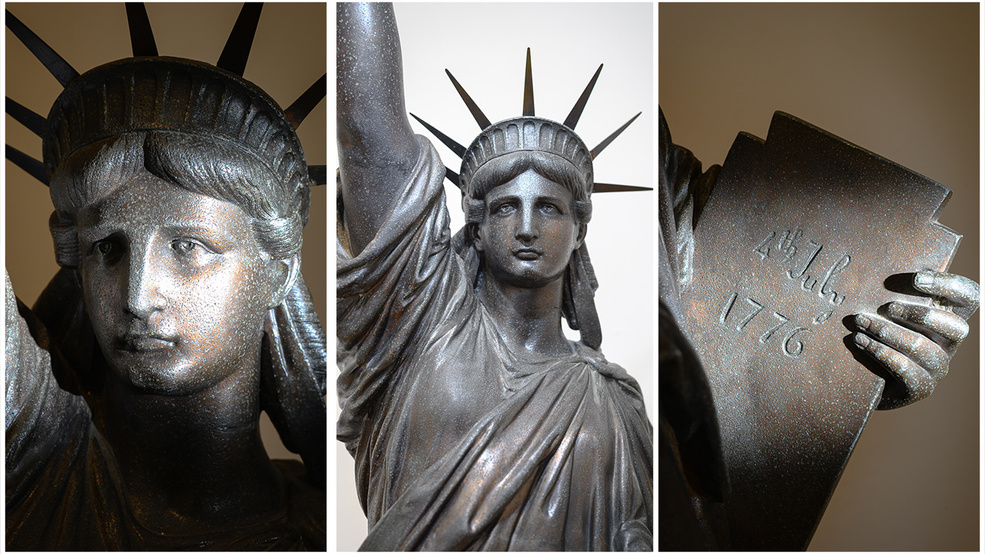 It's not every day that Cincinnati gets one of the only remaining original prototypes for the most recognizable monument in America.

Sitting at the Caza Sikes Gallery in Oakley is a four-foot-tall miniature version of the Statue of Liberty. The cast, a near-perfect copy of the full-sized statue in NYC, was created nearly a full decade before Lady Liberty graced New York Harbor by the same artist. It is one of eight remaining to be identified as of this writing.

If you're not familiar with its history, French artist Frederic Auguste Bartholdi's passion project was to design and build our Statue of Liberty. Erected on Bedloe's Island, the statue was dedicated on October 28th, 1886. Lady Liberty, as she's come to be called, represents "Liberty enlightening the world" and commemorates the United States' independence from England.

Before all that, though, Bartholdi had to come up with the design and a plan to raise funds to build it. He contracted a foundry called Avoiron, which specialized in manufacturing imitation bronze as well as fittings for electrical lighting and lamps, to produce a series of one-foot, two-foot, and four-foot versions of the statue. These miniature versions doubled as working lamps with an etched glass globe that sat atop the torch and were sold to raise money for the actual statue's construction. Instead of bronze, they were cast with copper-clad zinc. The four-foot model was dubbed "Model A."

Though only eight have been located since they were created, the numbering on each of their bases suggests there were many others. The Model A statue at Caza Sikes bears the number 24.

SO WHY'S THIS EXTREMELY RARE FRENCH STATUE IN CINCINNATI?

It's unclear how or why Model A #24 ended up in America. What we do know is that a family in a rural area of Ohio bought it many decades ago at an estate sale and hid it away from the world to keep it safe. The family was so secretive about the statue, they didn't reveal what they had to anyone until 1980 when they had it shipped to the National Gallery of Art for examination. There, it was recommended for conservation services that were cost-prohibitive to the family before it could be sold. The family had it returned and sat on it for nearly 40 more years.

That's when Cincinnati got involved.

A member of the family mustered the courage to call Caza Sikes about what they had late last year. After confirming its authenticity, Caza Sikes agreed to bring it to Cincinnati and host its auction at its gallery in Oakley. That auction is scheduled for February 22nd.

Check out photos of this incredibly rare relic in the gallery at the top of the page.

For more information about Caza Sikes, hit up their website.