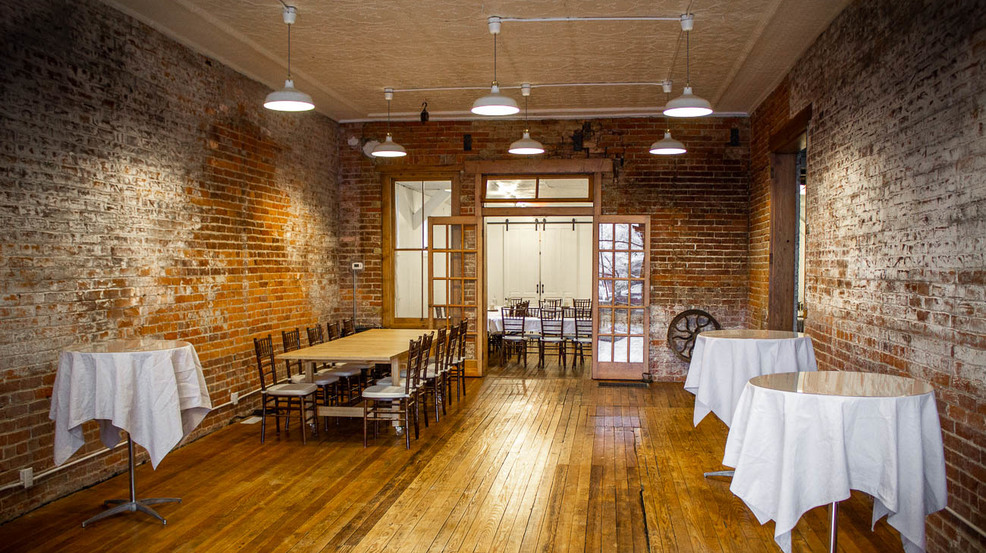 Headquarters Historic Event Center is a unique event space that opened in Newport in March 2018, but the building itself dates back to the 1870s. It’s been an agricultural hub, Minges Hardware Store, and Melody Manor Dog Grooming in its past life. Mike Smith originally purchased the space to be an office ‘headquarters’ for his design company called 8020, but while uncovering the structure’s beautiful, historic aesthetic during reconstruction, he decided to turn it into an event space instead. And the Headquarters nickname stuck. ADDRESS: 935 Monmouth Street (41071) / Image: Katie Robinson, Cincinnati Refined // Published: 4.20.19
SEE MORE

Do you want your big day held in a traditional space you’ve seen 100 times, or are you looking for something with an industrial aesthetic that also has an abundance of historic treasures from floor to ceiling? And by big day, I mean wedding, birthday party, 10-year high school reunion, or whatever else a big day is for you.

Whatever kind of celebration you have coming up, you can trust that Headquarters Historic Event Center will be unlike any other venue you’ll find around here.


A HOST OF PURPOSES BEFORE HOSTING EVENTS

The Newport building on Monmouth Street where Headquarters resides dates all the way back to around 1870. That’s when it was an agricultural hub built out of wood before the bricks, complete with a stable and a horse and buggy around back. By 1886, it became Minges Hardware Store, followed by Melody Manor Dog Grooming for forty years.

Headquarters opened in March 2018 and has been hosting parties, work functions, and even yoga classes ever since. You don’t typically hear the words ‘flexible’ and ‘event venue’ in the same sentence (unless we’re talking about those yoga classes, of course), but Mike Smith, the owner of Headquarters, prides himself on being accommodating with his clients. Whether someone needs extra time to set up, or wants to keep the party going a little longer at the end of the night, his ultimate goal is to make sure someone's special day plays out exactly how they envisioned it.

But making this historic structure into an event space wasn’t the original goal at all. Mike began a design business called 8020 when he was just a sophomore at the University of Kentucky. He purchased the building to be the design studio for the company, but while working on it, he discovered the incredible character of the site and decided Newport didn’t need another office space. During the construction of the offices, the team had nicknamed it ‘headquarters.’ The name stuck.

Mike describes Headquarters as a “one-stop shop” for event amenities. The venue holds a capacity of 200 standing guests and 100 seated guests, rented at an hourly rate that covers everything. You won’t find additional hidden fees for things like outside catering, furniture, or use of table cloths/decorations when it comes time to pay your bill. Nor do they require you to choose from a list of exclusive caterers, either.

They do have a recommended list of food service groups who they’ve partnered with in the past, including Thunderdome Restaurant Group and The Delish Dish, as well as local restaurants like Taste of Belgium, Bakersfield, and The Eagle.

Headquarters provides in-house decorations, too, such as tables, chairs, homey lounge furniture, linens, centerpieces, and even two projectors to display slideshows. Additionally, clients can bring in their own pieces to customize their event.

People have rented the space for wedding ceremonies and receptions, showers, birthday parties, art classes, photography sessions, business and organizational meetings, and all sorts of events. Though it only opened a little over a year ago, it has already won Newport's Historic Preservation Award and New Business of the Year Award for 2018.

Hosting festive gatherings isn’t even what excites Mike most about his venue; there’s a strong community mission incorporated, as well.

One such non-profit Mike's involved with is ReNewport—a community development organization that plans social projects to improve the City of Newport. It's hard not to see how Headquarters is part of that improvement.

So whether you’re searching for a special place for a one-of-a-kind reception, or you want to get involved in Newport’s prosperous future, Headquarters can be your hub for it all.

Plan your next event and learn more about Headquarters at their website. You can also take a virtual tour of the space here, and see how it looks during various festivities in the photo gallery above.