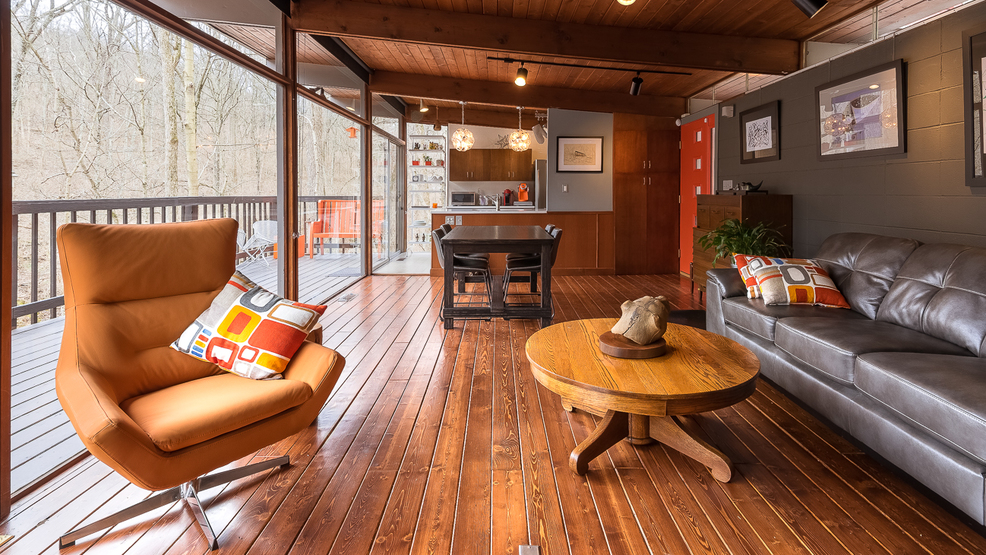 The Hamer House was built in 1961 for Jean Hamer, a UC librarian, by architect Richard Lakeman. Lakeman was a junior and a student teacher at the time, and Hamer's house was his first design that was ever built. The 885-square-foot house sits on a hill on the border of Finneytown and Wyoming above a creek bed. It looks out onto the surrounding forest thanks to a wall of windows in the back of the house. / Image: Phil Armstrong, Cincinnati Refined // Published: 4.4.19
SEE MORE

After 58 Years, the Hamer House Is Visited By Its Cincy-Born Portland Architect

Settled along the rocky banks of Congress Run Creek and splitting the border of Finneytown and Wyoming, a modest-yet-mighty Midcentury modern abode rests quietly within the woods. Built in 1961, 463 Galbraith Road boasts a unique reputation only two other homes in the Queen City share. The house, colloquially referred to as the Hamer House, was designed by Cincy-born Portland architect Richard Lakeman.

Lakeman, a graduate of the University of Cincinnati and a College Hill kid, designed the 885-square-foot house for Jean Hamer. Hamer was a librarian at UC at the time and required an efficient, modest household with two bedrooms and flexible living areas. During its construction, Lakeman was both a student teacher and junior in his program. Due to his proficiency in the course, he was entrusted with designing and building the house. Hamer’s home would become Lakeman’s first-ever project to see the light of day—or rather, the shade of the forest.

His blueprint took advantage of the property’s natural surroundings. The seemingly “floating” house exists in a sweet spot below Galbraith Road and above the creek bed below it. Just a single-story, the Hamer House is outfitted with a wall of floor-to-ceiling windows that look out upon both a deck that runs the length of the house and the thick forest behind it. An uninterrupted, sloped roof blends together the interior and exterior as it gradually ascends from front to back and extends over the back deck. Small windows in the front of the house invite ambient light in without drowning its main hall and living areas in harsh, direct sunlight.

Simply put, it's a stunningly smart and attractive design.

Though Lakeman modeled the home for Hamer in 1961, a series of other owners would go on to preserve and maintain it over the ensuing decades. The current owner, Brendan Morrissey, greatly appreciates the house’s original design. He purchased the Hamer House in July 2018 and spent months working to thoughtfully improve, repair, and maintain the house.

His dedication to caring for it would pay off in March of 2019. The architect, who hadn’t visited the property since he designed it as a UC architecture student 58 years earlier, was finally coming to see it in person.

There’s a good reason the architect hasn’t visited in so long.

After enlisting in the Air Force and serving a tour in Korea in the early ‘50s, Lakeman returned to the States by way of Seattle and Portland to get back to Ohio. During his time in Portland, he fell in love with the Oregon city. 12 years later, and after successfully earning a bachelors at UC, a masters at Yale, and starting a family, Lakeman left the Queen City for rosier pastures out west. There, he spent decades building both homes and his reputation as a premier American architect.

Fast forward to the early 2010s, and Bob North, who owned the home before Morrissey, made contact with Lakeman. He invited the architect and his family out to see it during that time. After Morrissey purchased it, he maintained correspondence with Lakeman. Eventually, arrangements were made, and the architect flew out to his hometown once again.

After visiting two of his childhood homes that had decayed considerably over the years, a saddened Lakeman was ready to see the well-preserved Hamer House along Congress Run Creek. Morrissey and the other owners who helped keep the house together over the years didn't disappoint the 89-year-old architect.

Lakeman was delighted with the house's pristine condition. After seeing his other childhood homes in states of disrepair, he seemed refreshed.

“[My childhood homes were] so sad to see. It was so discouraging. Then to come here and see it—everything so lively and carefully cared for—that’s a nice thing. It gives me some hope.”

He inspected every room, the deck, and the exterior of the house, noting the small changes that were made in the decades since it was built. According to Lakeman, the structural simplicity of the house distinguishes it from the designs he went on to do after it. While the Hamer House reflects his style, his Portland designs were decidedly more vertical. He's proud of that fact; modesty, to him, is an evergreen idea.

He cites the house's relatively low carbon footprint as an important factor, too. He believes the Hamer House doesn't adversely contribute much to climate change, which is one of the big reasons he appreciates—and is proud of—its design.

“I think we should stay as efficient as possible despite the contrary influences of wealth and greed," he says. “Modesty and efficiency were appropriate in those days, and this many years later, it’s still equally appropriate.”

See photos of Richard Lakeman's Hamer House in the gallery above.