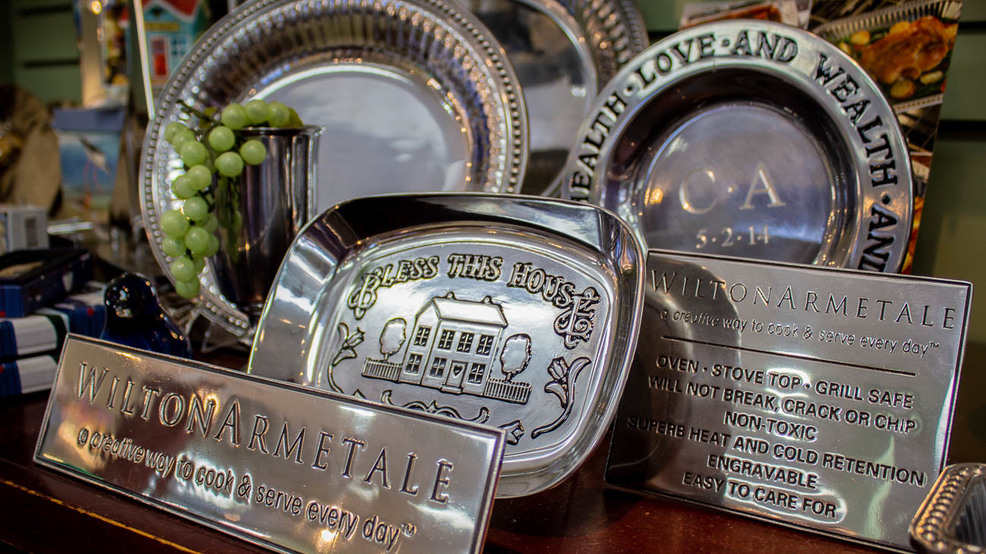 Customers can bring in their own items to be engraved, or purchase decorative pieces from the shop and decide to add a personal touch to them. / Image: Katie Robinson, Cincinnati Refined // Published: 3.9.19
SEE MORE

Engraving is a technique you don’t come across very often these days. There aren’t many shops around who have the training to perform the craft. When you want something personalized, you might go to a commercial website to get something monogrammed and call it a day. But the method of carving and etching a design, symbol, or lettering into a surface is an artistic practice that can be traced back to mid-15th century German goldsmiths.

Tony Gilson didn’t get his start in the 1400s, but he is one of the rare artisans who has been in the engraving business for over 40 years. Today, he owns and operates Gilson’s Engraving and Elegant Gifts in Madeira. He started out of high school with a three-year engraving apprenticeship in his hometown of Birmingham, England. He originally got into the training program to prolong being drafted into the British Army. He later served Her Majesty the Queen as an Officer in the British Army as well as a soldier of the Royal Engineers.

Little did he know he would go on after his service to work with a London company that would inscribe trinkets and gifts for Queen Elizabeth II to hand out when she would travel. He also contributed his talents to engraving high-end dinnerware, trays, and flatware for the Royal Yacht Britannia, as well as medals for the Order of the British Empire.

In 1964, Tony decided to bring his skills to America because he had “the spirit of adventure.” After overseeing a factory that made automotive press tools, he opened the Pewter Place Engravery in 1974 in Dixie Terminal downtown. They went on to have spots in the Westin Hotel, Montgomery Market Place, Kenwood Towne Center, and Madeira, where they have been since 2008. They also changed their name along the way to Gilson’s Engraving and Elegant Gifts.

“People come here to celebrate achievement,” says Susan Gilson, Tony’s wife and the co-owner of the shop. They sell all sorts of mementos that can be personalized such as charm bracelets, baby cups, and kitchenware for occasions like birthdays, weddings, and graduations. Glass, acrylics, silver, gold, pewter, and crystal are just some of the materials they work with. Other than Tony’s master hand engraving, items are carved using lasers and computers depending on what kind of material needs to be engraved.

With there being hardly any other personalized gift engravers around, Susan describes their rare shop as “the engravers that other engravers recommend.” Their customers are typically multi-generational and know they can depend on them for the best quality gifts.

Aside from presents, Gilson’s partners with prominent local corporations, schools, and nonprofits like the YWCA who bestow plaques and awards for different events. Their works were also once distributed at a fundraiser for George W. Bush’s campaign.

Gilson’s Engraving is an all-around personal business when it comes down to it. When you take something home from Gilson’s Engraving, you leave with the special guarantee that someone made your item in-house with care, commitment, and with a level of quality not found elsewhere in the Tri-state.