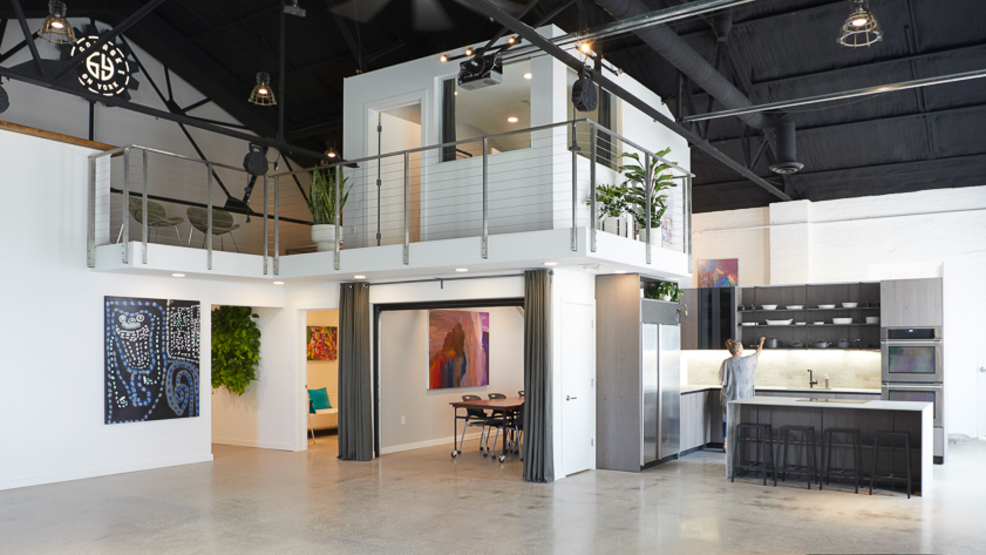 Garage On York is a studio and creative space. It functions as an adaptable "blank canvas" designed to host professional photoshoots, videos, and a surplus of creative commercial production within a single, two-story, 3,000-square-foot space. The studio includes a full kitchen, a meeting room, a loft, and several other areas and features that are designed to facilitate a professional shoot or hold a small corporate meeting. Its variety of versatile settings aid in achieving the creative goal of the client who rents the space. ADDRESS: 706 York Street (41071) / Image: Monty Milburn, via Garage On York // Published: 11.6.19
SEE MORE

With the recent opening of Garage On York, Newport is fast becoming a community where artists from many backgrounds convene to produce photography, TV commercials, and more.

Simply put, Garage On York is a studio and creative space. It functions as an adaptable "blank canvas" designed to host professional photoshoots, videos, and a surplus of creative commercial production within a single, two-story, 3,000-square-foot space. The studio includes a full kitchen, a meeting room, a loft, and several other areas and features that are designed to facilitate a professional shoot or hold a small corporate meeting. Its variety of versatile settings aid in achieving the creative goal of the client who rents the space.

Laura Chenault, co-founder and managing partner of Garage On York, sees it as a step up from her previous creative space in Northside, Pallet 23. She shuttered Pallet 23 after six successful years due to challenges associated with Northside's explosive growth immediately around her studio, and she picked up where she left off with Garage On York in Newport after partnering with studio821 owners, Ron and Monica Pies. That studio, a flexible space directed more toward consumer photography, is a block away from Garage On York, which they also own.

"The synergy between Ron, Monica and I has been good," Laura says, "and we feel like we're creating a hub for creatives."

HOW IT CAME TO BE

Ron and Monica Pies’ studio821, which already provided lifestyle props, backdrops, and accessories for professionals in the portrait photography industry, began hosting commercial production projects. Seeing a growing opportunity to do more commercial-level production, they sought an additional space where commercial production could flourish. Having purchased a former 1940s muffler shop a block away because of its large garage door and drive-in capabilities, they imagined their expansion could take shape there but didn’t quite know how to build the concept. That’s when Laura Chenault, someone with years of experience in commercial production, reached out and the two parties realized they could make the dream a reality together.

Before Garage On York could take shape, though, the building needed serious rehabbing. Pendleton architecture firm Fold and Form designed the space, and Ron, a general contractor by trade, did most of the buildout alongside several other contractors. After a year of hard work, the studio was ready to let the creative juices flow.

And flow they did. The studio has already hosted photo and video shoots for well-known corporate clients since its soft opening this year. After walking around the space myself, I can see why big-name brands would want Garage On York to be the place where they create their next major marketing campaign. From the imported Italian kitchen by KTCHN to the custom ironwork by 1st in Design, the studio's clean aesthetic and high-quality finishes, as well as its intentionally untouched raw elements, act as a catalyst for artistic expression.

WHAT GARAGE ON YORK OFFERS

Additionally, Garage On York is joined by a separate design showroom that's accessible from the first floor. That area, called KTCHN, acts as another space that can also be rented for myriad creative ideas. Instead of being a blank canvas like Garage, though, it features a collection of curated consumer products. KTCHN, Switch Lighting and Design, @ Home Integrations, RM Living, and Mansion Hill Custom Floors all showcase products within the flexible space.

Between Garage On York and studio821, the team’s portfolio of spaces and offerings more than satisfies creatives in need.

“We want what is best for our customers. Our job is to present all studio options that we have available between the 2 properties and let the creative company decide what is best for their clients' project,” Ron says.

Both Laura and Ron cite the massive garage door as among their favorite features of Garage On York. Easy vehicle access to the new studio is a big selling point.

"At a lot of shared studios, accessibility is not as convenient. This couldn't be more convenient, really," says Ron.

That convenience and flexibility will be the driving force behind Garage On York's future. While the trio's been hard at work designing the studio for creative production, they envision it as a space where workshops on weekends and cross integration with studio821 can take place down the road. Because of its central location and proximity to downtown, ample parking, and well-designed studio space, the sky's the limit for the garage that's helping transform Newport into New Hollywood.

“Our hope is that both GOY and studio821 can continue working together to transform Newport’s ‘Local Historic District’ into a hotbed area or hub for creatives and other industry professionals,” says Ron.