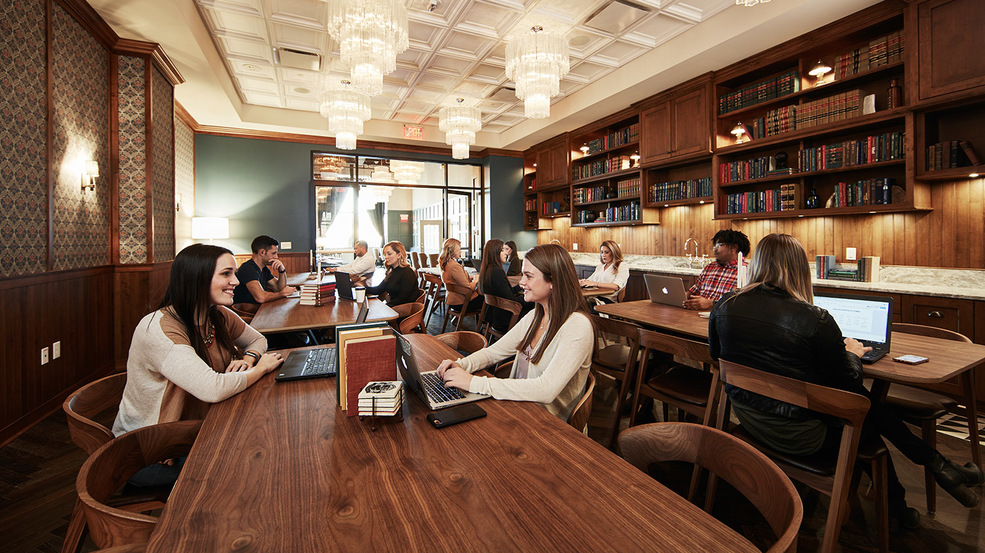 I had the pleasure of touring Fueled Collective, the co-working space at Rookwood Exchange. Upon entry, I was greeted by a young woman who assisted me by finding the person with whom I was supposed to meet. As I waited for Betsy to arrive, I took a minute to soak up the scene.

It’s Ivy League library meets Soho House meets your friend’s parent’s sitting room in Indian Hill. (Ya know, the house with all the high school parties and the house you voluntary dog sat at because it was so darn nice.)

After I allowed those images to digest and merge into a single snapshot of what Fueled Collective is supposed to be, I was overcome with this strange feeling, kinda like an out-of-body experience.

I missed my laptop.

Granted, it’s my third arm, so whenever we’re apart, I feel it. (But rarely do I miss her.) In this case, however, I really missed my MacBook. I had this insatiable desire to sit down and get to work. Weird, right? This space invites you in with an atmosphere that says, “Grab a seat, come up with a brilliant idea. Share a laugh with a newly-made friend at the table next to you. And after that, grab a beer.”

I wanted to be included in this community, not just capture its essence through the lens of my camera. But I wanted to be in it... optimizing and amplifying and trendsetting. Here’s the good news: I can join the cool kids club, and so can you.

Fueled Collective is a membership-based co-working space and after-hours social club. The 25,000-square-foot venue includes plenty of open seating, private huddle rooms, phone booths, big screen TVs for PowerPoint presentations, a bar and more. Yes, a full-service bar that all members (no matter the membership level) have access to after 5 p.m. There’s complimentary coffee for all you caffeine addicts. There’s tea for me. And beer. Did I mention that already? Yes, I’m pretty sure I did. But here’s the kicker—beer is free all day until 5 p.m. Of course, these movers & shakers won’t be getting sloshed on a daily basis. But hey, it’s a nice perk.

There are more perks.

The St. Gregory Group—a local company and the majority partner responsible for Fueled Collective—also owns the LB (fitness boutique) next door. This means you can come to work, followed by working out. Or there’s a more traditional gym upstairs for those of us who prefer a mixed bag cardio/weight routine over Mel B’s glute-buster. The greater point being that you can get a lot of productivity out of one space, from knocking out those sales objectives to meeting your weekly fitness goals.

And then, there’s beer.
(Oh yeah, already mentioned that.)

Fueled Collective offers various membership packages, from as little as $95/mo (“The Lush”) to as much as $650/mo (“The Boss”). Note: The two highest-level packages are the only ones that include access to the upstairs gym, but all packages include classes at the LB boutique fitness gym.

The venue is also available to rent for meetings and/or private events.

Fueled Collective is located at 3825 Edwards Road (45209) at the Rookwood Exchange. It’s on the same strip as Taste of Belgium.

Last thing: There's actually another Fueled; it's in New York. If you're curious to see how that space compares to the Rookwood one, you can check 'em out here.