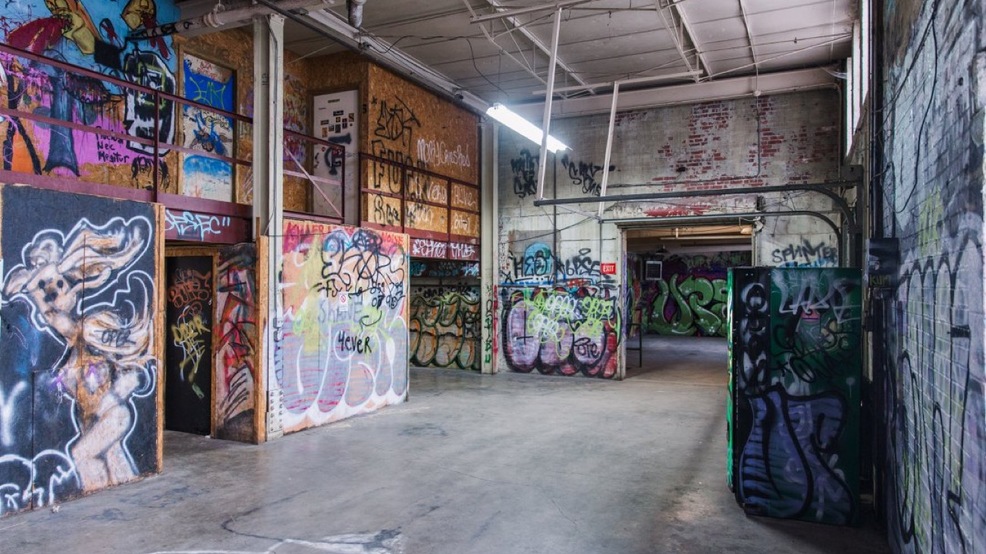 Located in the bottling plant of the former Clyffside Brewery, Felsenhaus is billed as a curated ecosystem of makers, artists, and entrepreneurs. That is, it's anything you want it to be, whether that's event space, an artist studio, or a gallery. ADDRESS: 242 McMicken Avenue (45202) / Image courtesy of Felsenhaus // Published: 7.30.18<br>
SEE MORE

A Bruce Willis Movie Was Filmed Here, Among Other Things...

Head to theaters August 31 and you can see Bruce Willis doing Bruce Willis things in the Queen City. The movie is called Reprisal, and while not everything filmed here compares to the 1993 masterwork that is Airborn, still you might enjoy identifying the local settings.

One of them is Felsenhaus—and for good reason. But there’s no understanding the present of this intriguing, multi-use industrial space without understanding its past. So that’s where we’re headed first. Strap in.

Located north of Rhinegeist on West McMicken Avenue, Felsenhaus sits in an abandoned brewery building with the word “Felsenbrau” painted on it. Yet neither Felsenhaus nor Felsenbrau were ever the name of that brewery. It was rather founded as Hamilton Brewery in 1845 before it became Klotter Brewery (1854), Sohn Brewery (1867), Mohawk Brewery (1907), and no brewery during Prohibition.

Today, if you know it at all, you know this seven-building complex as Clyffside Brewery (1933), whose Felsenbrau beer was a real winner. (Felsenbrau roughly translates to “brewed in the rocks,” referring to the extensive tunnel network behind the buildings). Alas, brewing activity ceased in 1957; and with that, the complex went vacant.

We know what happened next. An army of private developers in Over-the-Rhine happened. They poured money and resources into the neighborhood, uncovering new masterpieces along the way. The Clyffside complex is one of them. And now that the spotlight is on McMicken, these buildings are being put to an array of new and old uses.

The main Clyffside building is set to be a brewery again. Its ornamented facade will surely be the centerpiece of whatever McMicken is to become. As for the bottling plant next door, that is where we come back to Felsenhaus.

WHAT THE HECK IS IT THOUGH?

That’s the question you’ll probably be asking even after we’re through. Because Felsenhaus is whatever you want it to be. It's raw and organic. It’s a blank canvas. It is, in some respects, nothing. And if you’re in the right profession or have the right hobby, it's exactly what you want.

Owner Shane Neuringer, who purchased the building with a group of private entrepreneurs in 2017, bills it as "a creative oasis, a curated ecosystem of makers, artists, and entrepreneurs.” And, actually, that fits pretty well. What he offers through Felsenhaus are workshops, artist studios, shared and dedicated desk areas, creative maker-spaces, gallery space, and event space. In total, 45,000 square feet is available without prescription.

"We are looking for vendors who would like to operate food kiosks that could serve in-house tenants, neighborhood customers as well as events held at the property," says Neuringer. "We’d also like to bring in a partner or operator for our bar program which could be quite substantial, considering our roof top provides spectacular panoramic views of the entire Urban Basin, and into Northern Kentucky."

The rooms are certainly distinctive. The Loading Dock, the Gallery Loft, the Warehouse, and the Mohawk Room all offer their own unique feel. In the Warehouse you might have an event for hundreds among the tall ceilings and concrete columns. In the Mohawk Room you might have a private party with the incredible graffiti art as a backdrop. Otherwise you’re looking at yoga classes, dance parties, creative photography and videography of every kind, and regular meetings of the Brewing Heritage Trail.

It’s no wonder the studio behind Reprisal chose not only to shoot scenes at Felsenhaus, but also to put their entire art department there. It had just the industrial grit the location scouts needed. It had just the artistic energy the studio was looking for.

So check Felsenhaus out. You might find a way to use it that no one has thought of before. Neuringer currently has more inquires for the space than he knows what to do with. As for the future, he and his ownership group have big plans.

"We hope Felsenhaus will become known as one of the places to go in Cincinnati if you want to be inspired, to create, collaborate and experience things you might not elsewhere. A hot spot for arts and culture."