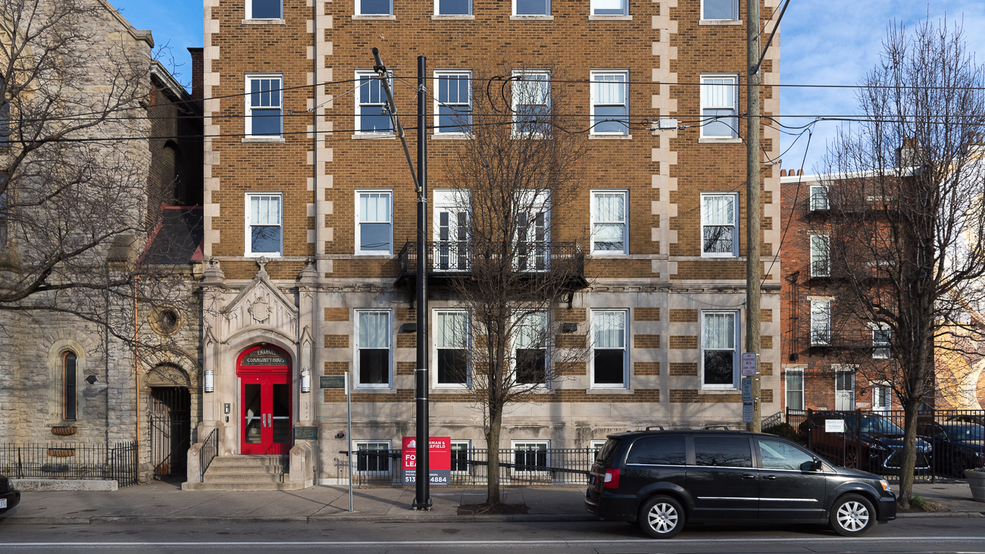 The Emanuel Community Center in Over-the-Rhine was built in 1923 for the church next door after they determined they needed a community center. The organization commissioned a design by the firm of Samuel Hannaford & Sons. Relative to the other buildings around it, it's noticeably modest in architectural embellishment. Having a subtle skeletal aesthetic with its lateral cement "ribs" and staggered quoins, the otherwise standard brown-brick building comes to an ornamented peak with an Episcopal cross. / Image: Phil Armstrong, Cincinnati Refined // Published: 1.10.19
SEE MORE

This Washington Park Building Is More Significant Than You Realize

One of the best things about cities is their ability to hide many of their most interesting features in plain sight. Behind every wall and window is a story, most of which aren't obvious to passersby on the street. Sometimes, those stories were lost and haven't yet been rediscovered. There's always something to learn.

There's a building on Race Street that's a shining example of this. While you've probably seen it a million times, it's likely more significant than you probably realize for four distinct reasons.

Let's draw you a mental picture of the place. You know where Washington Park is, and you know where 13th Street runs into it. That's where 1308 Race Street lives.

Relative to the other buildings around it, it's noticeably modest in architectural embellishment. Having a subtle skeletal aesthetic with its lateral cement "ribs" and staggered quoins, the otherwise standard brown-brick building comes to an ornamented peak with an Episcopal cross. A wrought iron balcony services two French doors on the second floor, and on the street level, bright red front doors are framed in the majority of the facade's artistry: a three-spired, heavily decorated door frame that seamlessly transitions into a four-step stoop.

On its southern side, you can see a vertical mural from the corner of 13th and Race Streets. A small parking lot heads up the corner.

This is the Emanuel Community House, otherwise known as the Emanuel Community Center, in Over-the-Rhine. The organization was established in 1871 to entice freely sinning German immigrants to get interested in the church—specifically the one next door to 1308 Race Street. By 1923, the church needed a community center and commissioned a design by the firm of Samuel Hannaford & Sons. (NOTE: Samuel Hannaford did not personally design the building because he died in 1911.)

Alright, now the best part: you know that mural on the south side of the building mentioned earlier? It's called The Vision of Samuel Hannaford. In it, the viewer is looking out onto a balcony through a set of open double doors and into a park filled with Hannaford's creations: Music Hall, Elsinore Arch, City Hall, and others. Does that balcony look familiar? It's the same one in front of the double doors on the front of the building. This may be the only instance in which an ArtWorks mural directly depicts the very same building it's painted upon in the mural's design (@ me on Twitter if I'm wrong—@cincinnatiphil).

One of history's greatest fighters actually spent time in the building, enrolling in Emanuel's athletic programs when he was alive. Ezzard Charles, otherwise known as the Cincinnati Cobra, was a fierce boxer and World Heavyweight Champion in his day. He lived on Lincoln Park Drive, which was renamed Ezzard Charles Drive after he passed away in 1976. Ezzard Charles Drive connects Union Terminal to the back of Music Hall, which is just across Washington Park from the Emanuel Center. His proximity to and use of the center may have directly influenced his successful career as an athlete.

Charles' enduring legacy is celebrated in Cincinnati to such a degree that he has his own ArtWorks mural on the north side of the condo building located at Republic and Liberty Streets, just a few blocks north of the Emanuel Center.

The Center, while originally intended to be used for by Emanuel Community, was purchased in 2012 by Grandin Properties. Among its many planned new uses, multiple floors of valuable OTR office space were included to house the burgeoning startups in the area. While Grandin moved its own operations into the building, goDutch, a popular brand consulting firm, is among its many tenants. Their sleek office is filled with modern furniture and looks out onto Washington Park below.

But of all the occupants of the building, perhaps the most unique is a non-profit with a particular mission centered around athletics and opportunity.

That non-profit is the Cincinnati Squash Academy (CSA). The CSA is dedicated to offering unique educational opportunities to children in underserved communities by way of athletics—specifically through the disciplined game of squash. The idea is to elicit the natural talents of children to guide them toward the goal of college using the sport as their medium. Cincinnati's urban squash league is part of a national system that includes proven programs located in other high-profile cities, like NYC and Boston.

Remember how Ezzard Charles participated in athletics inside the Emanuel Center? That former gym was totally transformed into several squash courts to accommodate the CSA. Additionally, classrooms and offices for CSA staff are located beneath the gym. In total, 35% of the Center now belongs to squash-related activities specifically designed to aim the trajectory of students skyward toward uncharted opportunities.

The next time you're walking around Washington Park, stop and take a moment to observe this quietly important structure. From Ezzard Charles to muralistic (not a word) homage to a full-on series of squash courts, there's far more to 1308 Race Street than meets the eye...