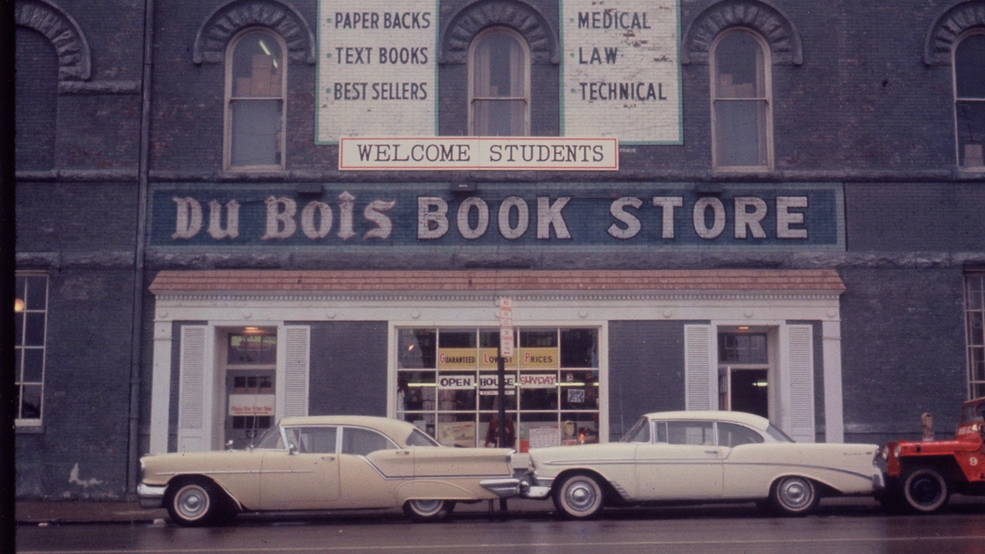 DuBois Book Store Celebrates a Milestone After +60 Years in Business

It’s a quiet Saturday morning in Clifton. A few hours before students begin stirring around UC’s uptown campus, there isn’t much going on. Uncle Woody’s, an old college dive sits quietly, recovering from a Friday night while prepping for a busy Saturday. Scents of Asian cuisine, Chipotle, and the occasional big rig fill the air. On an unseasonably warm winter morning, they might find their way into the entrance of DuBois Book Store. A long-standing establishment in Cincinnati’s Uptown district—not to mention the University of Cincinnati—DuBois has been serving Bearcats’ students, alumni, and fans since it opened on the corner of Calhoun and Clifton in 1955.

Yet, after all of its years in business, DuBois prepares to celebrate a milestone it’s earned over the last decade: 10 consecutive years of being voted the “Best of UC” by the university’s student-run news magazine, The News Record. According to John DuBois, owner of the store, the accolade "came with a tremendous sense of pride in our selection of Bearcats clothing and souvenirs."

Early on, as a professor at Hiram College, Harold DuBois (present owner John DuBois’ grandfather) recognized the lucrative business behind college textbooks. Upon leaving the university, he began selling them out of a trailer to different colleges in Ohio. It wasn’t until 1936 that Harold, with money earned from his simple business plan, opened the first DuBois Book Store at Kent State University. Back then, the business revolved around college textbooks; specifically, the sale and re-purchase of them commonly known as “buyback." From Kent State’s location, DuBois expanded its reach to Miami University's students in 1945 with a similar business model in a storefront on East High Street. Ten years later, recognizing a need and opportunity, DuBois’ Clifton location would open for UC students.

Touting itself as the “first stop off campus,” today’s DuBois Book Store looks much different with two floors of licensed collegiate apparel. But it hasn’t strayed from the textbook buying and selling business, despite the ever-changing and competitive market for college textbooks.

“In 2005, we put millions of dollars into the building to keep it fresh and appealing, and to change with the times,” says DuBois. “We did it so students, fans, and alumni would have a more modern shopping experience. Their expectation as a consumer had increased.”

A DECADE OF EXCELLENCE

Today (Wednesday, February 27th, 2019), it was announced DuBois was voted “Best of UC” in the category of "Spirit Shop" by the readers of The News Record. It marks the 10th consecutive year DuBois has won a category related to its presence at the university, and for that, the business isn’t only proud, but it’s ready to celebrate. Expect giveaways, free food from other Best of UC winners in Clifton, and plenty of fun.

“It’s a small way to celebrate the fans, students, and alumni who’ve enabled us to be the leader in Bearcats spirit wear,” says DuBois.

The book store is open Friday, March 1st from 10 AM to 8 PM for normal business hours and to celebrate with the students, fans, and alumni. You can learn more about DuBois by visiting its website.