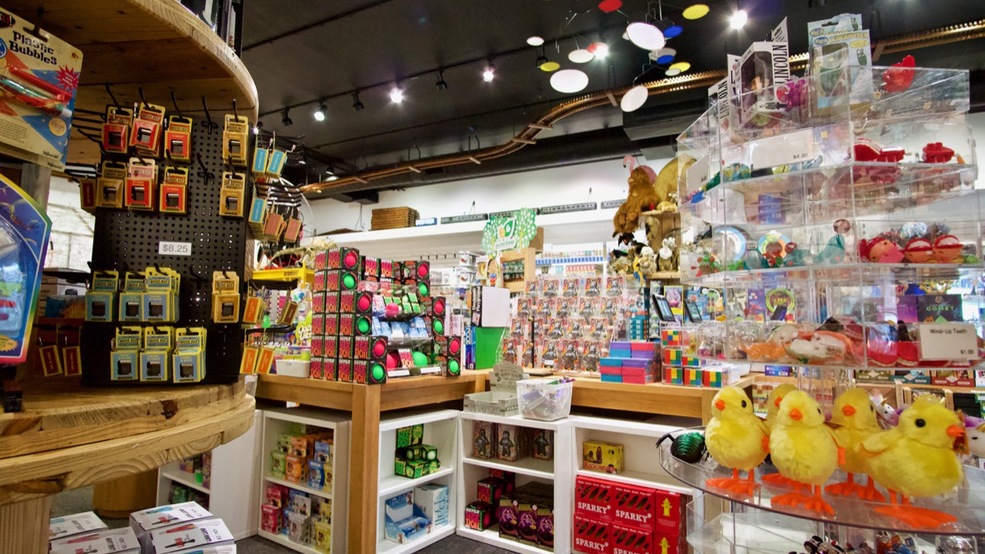 There’s plenty for the toy hobbyist to play, too. Puzzles, high-end tech toys, and an array of kinetic contraptions are offered. It has two storefronts: one in Mariemont and one in Milford. MARIEMONT LOCATION ADDRESS: 6840 Wooster Pike (45227) / Image: Brian Planalp // Published: 11.14.18
SEE MORE

Mariemont's Coolest Toys on Earth Holds up to Its Namesake

Making toys is an art form. So, apparently, is selling them. You’ve got to know the ins and outs of every gadget and gizmo in your store. You’ve also got to bring a Willy Wonka-like fascination with what toys are—how they can inspire, captivate, and edify. It has to be part instruction, part magic trick. And above all, it has to be fun.

Eliot Werner has it. He’s one of those people you always hear about who goes to work but, properly speaking, will never work a day in his life. That’s because the store he created—Coolest Toys on Earth—is so amusing.

WHAT’S IN A NAME?

In this case, everything. Coolest Toys on Earth does indeed have some of the (clears throat) coolest toys on earth.

The quality of the toys is unmatched, too. Consider the fidget spinner. Werner doesn’t just carry one spinner in different colors. All told, you can choose from around 30 different models. The humdrum variety will do the job just fine, albeit with a faint hum. But for $15 more, you can get a stainless steel spinner whose bearings are utterly silent.

Still, many of Werner’s wares aren’t “toys” as you or I would think of them. The fidget spinners? Sure. Same with the spinning tops, slingshots, bouncy balls, styrofoam gliders, flying discs, yo-yos, animal figures, model cars, jars of ooze, and the like. But there’s far more here than that.

Case in point, the desk-sized music box that rolls on wheels, features percussions, and carries a price tag of $35,000. (Werner has sold four of them with another one pending.)

Yes, that’s an extreme example. But hopefully it succeeds in demonstrating this isn’t just a boutique-sized Toys’R’Us. Nor would Werner have it be. In fact, when he opened Coolest Toys on Earth in 2003, his first inclination was to take everything Toys’R’Us sold and make a bee line in the other direction. If they had it in stock, Werner probably wouldn’t.

There’s obviously nothing in the store as pricey as that rollable woodwind. Still, examples abound of serious toys for unserious people—that is, toys for the hobbyist rather than just the young.

These include high-end tech like drones. They also include somewhat more delicate things, like the series of intricate wooden miniatures residing above the (similarly intricate) spinning tops. And if you’re in the market for whimsical decor, try the rotating planet orbs or the rocking horse that happens to be the same model Prince William and Princess Kate put in Prince George's nursery.

Then we come to the cerebral toys. Some of these, like the array of hand-held puzzles decidedly more complex than a Rubik’s cube, require a “Eureka!” moment to enjoy. Others are kinetic marvels, such as the wood or wire contraptions where you put an object at the top and watch it fall to the bottom—with, I might add, an unexpected amount of rapture.

Such is the experience of being in Coolest Toys on Earth. Toys or not, everything there will put a smile on your face.