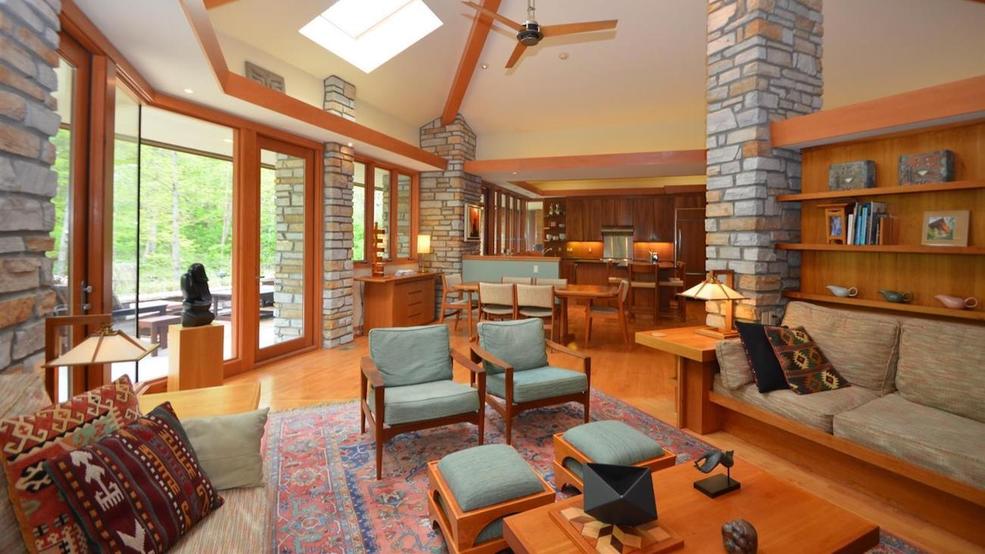 The many windows in the house allow the outside to spiritually “enter” the house. When it rains, the large eaves allow the windows to be open without water coming into the home. / Image courtesy of Susan Rissover, Cincinnati Modern // Published: 6.2.19
SEE MORE

Cincinnati isn’t home to many Frank Lloyd Wright-designed homes. In fact, FrankLloydWrightSites.com lists only a total of three. And, as you can imagine, his passing in 1959 effectively halted any chance of a fourth. But his legacy—and his concept of Usonian architecture—inspired other architects to build like him for years after he died.

Taliesin West, FLW’s studio and school in Arizona, is directly responsible for training many of those architects. And if you dive deep enough into Lebanon, Ohio, you’ll discover a house designed by Taliesin’s former head of residential design, Michael Rust, after the turn of the 21st century.

So why is there a hidden FLW-inspired, Usonian-esque house in Lebanon? For that answer, you need to ask Tony and Janet Collins, the current owners of the house at 2376 Manistique Lakes Drive.

HOW IT CAME TO BE

Tony Collins doesn’t know how he got into Frank Lloyd Wright’s work, but after a visit to Wright’s most famous residential project, Falling Water, in Pennsylvania, he and Janet, his wife, would end up pursuing a modern household of their own.

“I always call this a hobby that got out of hand,” he concedes.

Tony and Janet found a neighborhood in Cincinnati that had several Wright-inspired homes, one of which was for sale. After deciding the quality of the finishes didn’t justify the price tag, they set out to build their own in Lebanon.

Tony didn’t want just anyone to design their house, either. He wanted it to be an authentic FLW-inspired home. He contacted Taliesin West and linked up with the head of residential design, Michael Rust, to do the job. Michael was leaving Taliesin at the time to start his own firm and took Tony and Janet on as his first client.

While they were at Falling Water, Tony watched a red bird fly from one side of the house to the other. He could see it without breaking his gaze thanks to the many windows. When Michael was designing the home, Tony asked for that same feature to be included. John Hill, described by Tony as someone who “builds from the heart,” was tasked with bringing Michael Rust's design to life. By 2003, the Collins had their dream home in front of them.

The four bedroom, three and a half bathroom home was difficult to construct but ultimately turned out exactly how the Collins’ wanted. The house exhibits many Usonian principles: a private front-facing side, cantilevered overhangs, open rear side, many windows for as much natural light as possible, clerestory windows, and a strong visual harmony between the outside and the inside. It diverges from FLW’s Usonian vision by having a large kitchen, a three-car garage, and it’s laid out as an obtuse angle instead of a classic L-shape with a pitched roof in lieu of a flat one. Michael’s design, while influenced by his time at the Taliesin school and studio, evolved the Usonian model to reflect more modern needs.

The Collins’ raised their children there. As contractors who own their own business, they work out of their home. On dreary winter days, when the sky is grey and the rain is unrelenting, Tony says the house’s coziness naturally enhances to balance it out.

Due to its remoteness and forested setting on four acres, the Collins’ house doesn’t require window coverings. The design organically conceals the house’s occupants from neighbors, who are close but cannot be seen from the property. In fact, the house is so secluded, many don’t even realize it’s there.

It’s a treat for service workers when they get to make a delivery. “The UPS driver one time asked me, ‘do you get a lot of packages?’ I said yes, and he said, ‘good, because I want to keep coming back here,’” Tony remembers.

After considering their next phase in life, the Collins’ decided they wanted to relocate to Downtown for a change of scenery. Though they love their home, they feel like it’s time to let someone else enjoy it.

Because the house is one-of-a-kind, they enlisted Susan Rissover, a realtor who runs Cincinnati Modern and specializes in homes like the Collins’, to find the right buyer. Together, they put the house on the market for $649,000.

You can view the full listing for this Frank Lloyd Wright-inspired home here.