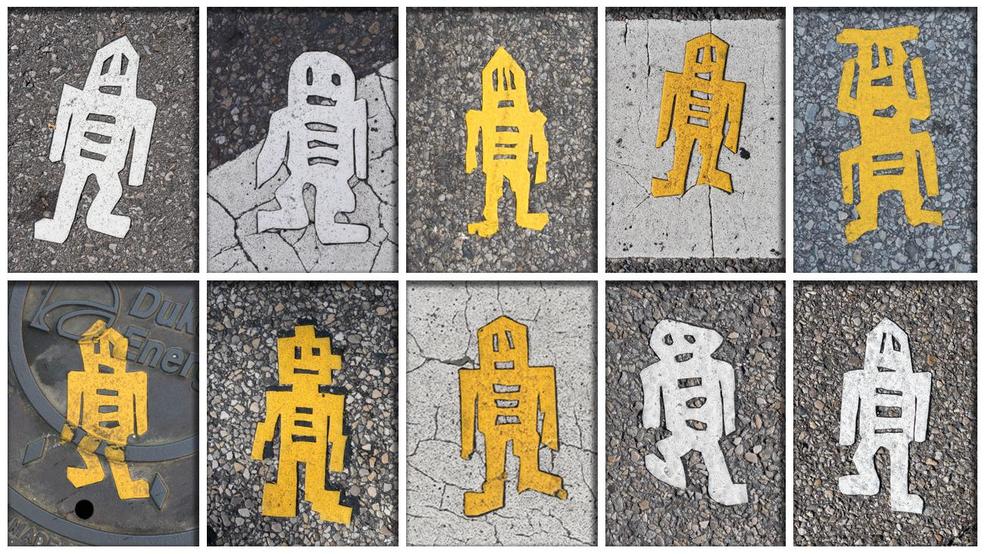 Cincinnati Crosswalks Are Being Invaded By Mysterious &ldquo;Stikmen&rdquo;

The gloomy weather and lack of an umbrella had me dodging raindrops all morning, and my mind remained laser-focused on the errands I needed to finish by early afternoon. As I left FedEx Office beneath the Westin Hotel and bounded across 5th Street toward Fountain Square, something odd caught my attention in the crosswalk. Not seeking a swift death by the Southbank Shuttle, I made for the curb and avoided stopping in the street.

But despite the rain-soaked urgency of my mission, I paused and looked back. Squinting at the pavement’s slick crosswalk lines that only a moment ago held the soles of my soggy shoes, I made out what looked to be a tiny man.

What is that? Did I step on it? Is itin the pavement?

Suddenly, a deluge of tires shrouded it in wet rubber and interrupted my gaze, snapping me back into find-shelter-from-the-rain mode. I ran toward Rockbottom, but made a mental note to return to that spot later.

The next day, I returned. And that tiny man I saw in the crosswalk turned out to be a stikman.

The stikman, a tiny robot-like figure, is guerilla street art done by an anonymous artist called “stikman” (and sometimes referred to as “Bob”). The artist has been placing them around major U.S. cities for 25 years.

They come in various shapes, sizes, and colors, and are made from different materials. The ones I’ve found in Cincinnati are either white or yellow stickers embedded into the street or stickers on vertical surfaces. A newspaper box at 12th and Vine features a 2D sticker. A former billboard pole at Central Parkway and Walnut had a 3D sticker before construction on the new Kroger began. Even Metrobot at the CAC had a 3D stikman stuck to its payphone at one point.

There isn’t a great deal of information about stikman online. Several interviews with the anonymous artist have been done over the last decade. To summarize them:

I’ve found over 30 of them throughout Downtown, Over-the-Rhine, and Covington. This doesn’t mean they’re only in these areas, though (lookin' at you, Northside). Look for them around street corners and in crosswalks. You may not immediately see them, but they definitely see you.

And stikman... if you're reading this... thank you for visiting the Queen City.

Check out the gallery of stikmen above. This is not a comprehensive guide.