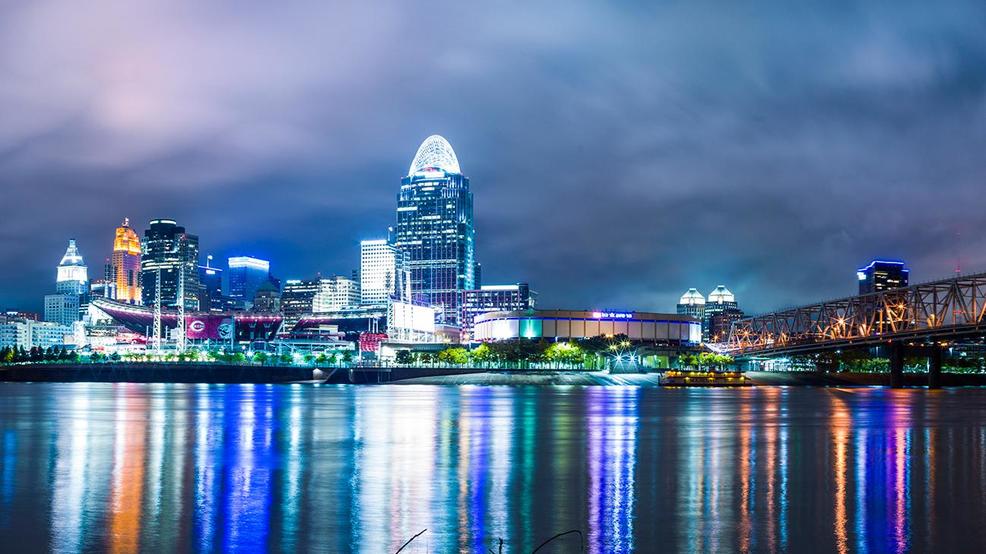 Closeup detail of a panoramic photo of Cincinnati looking north from Kentucky by Chris Ashwell from 2018. View the whole image by going to the Public Library downtown and seeing the Panorama of Progress exhibit. The exhibit runs until October 31. ADDRESS: 800 Vine Street (45202) / Image courtesy of the Public Library of Cincinnati // Published: 10.4.18
SEE MORE

The camera in your pocket has come a long, long way.

In 1848, camera technology was really just getting started. The Daguerreotype proved to be the first "practical" publicly available photographic process—an extremely sensitive, high resolution method that involved coated metals and dangerous chemicals. I'll spare you the details of how it worked. Just know it came to be in the late 1830s.

So a decade later when two Cincinnatians decided to take their cumbersome equipment, which was as portable as it was inexpensive, to a rooftop believed to be roughly where the Newport Aquarium is today, it was a historical moment in the Queen City. There, they created an 8-panel panorama of the riverfront using their equipment. The result was the award-winning Cincinnati Panorama of 1848.

The Public Library is all about it. Even if you're not consciously aware of it, you're probably subconsciously familiar with the piece because of how often they promote it. Heck, they even have the original displayed in the Cincinnati Room on the 3rd floor.

And sure, you can replicate this type of image on your phone in, like, two seconds today. But that's the whole point. 170 years ago, what those two men did on a Newport rooftop in the afternoon of September 24th was straight up 21st century. Back then, almost no one would bother taking a camera out of a studio to photograph a city for myriad reasons, but those two did. They wanted to capture a moment in time unlike anyone had before them.

They succeeded. Their work paid off. All these years later, we're still talking about it. And, more importantly, their 8-panel panoramic photo inspired modern day photographers to recreate it.

It's gone as far as attracting the attention of international photo experts. Swedish camera company Hasselblad sponsored a recreation of the Cincinnati Panorama of 1848 precisely 170 years after the original with the help of six local photographers (Chris Ashwell, Maureen France, Tony Walsh, Chris Glass, and Sharee Allen) as a participant in this year's FotoFocus event. A detailed look at a clock tower in the original photo gave away the time of day, so not only did they do it on the same date, but they did it down to the actual minute. To get the right perspective, the photographers stood on the top of the Newport Aquarium.

An exhibit called Panorama of Progress, which is on display in the Cincinnati Room of the Public Library until Halloween, shows the original panorama alongside the new one. A digital display shifts between the two to illustrate the changes over the course of 170 years. What's really interesting is what's stayed the same, though; namely the riverfront's build line and placement of its neighboring hills.

Moreover, visitors can zoom in and learn more about the original with an interactive touchscreen. Other Cincinnati photographs created by the same photographers who made the modern day 2018 panorama are also on display.

NOTE: neither the original 1848 nor the 2018 recreation is in the photo gallery above because they will not display well on mobile devices. Clips from other panoramas in the exhibit are shown instead.

See the Panorama of Progress on display on the 3rd floor of the Public Library downtown in the Cincinnati Room. It is free to visit.