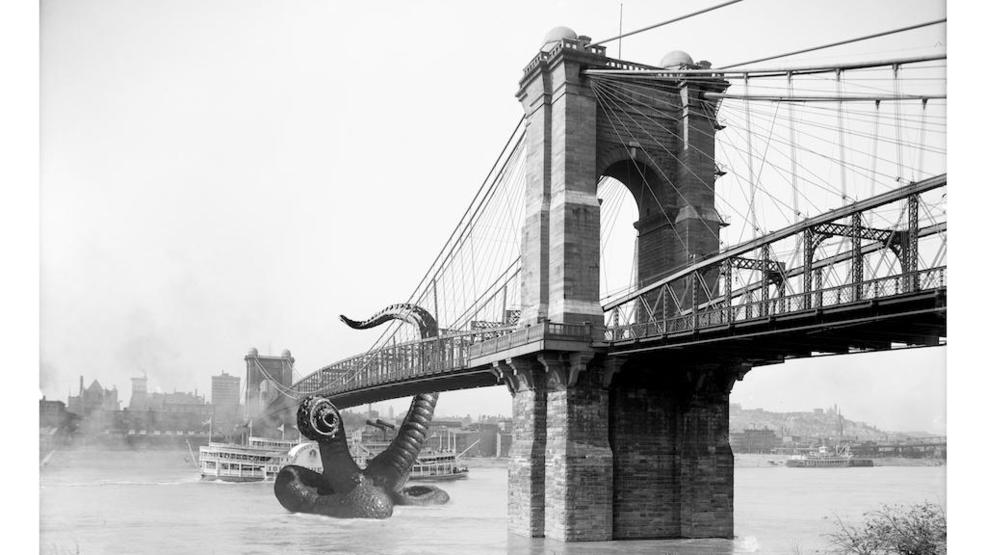 Matt Buchholz, a Pittsburgh-based artist, creates fantasy-driven illustrations to give a city’s history a brand-new past. He adds subtle, yet imaginative, aspects to vintage prints he finds. Each one comes complete with a fabricated tale Matt concocts. You can buy his prints on his Etsy page, which we’ve linked in the story. / Image courtesy of Matt Buchholz, Alternate Histories // Published: 6.19.19
SEE MORE

Cincinnati and the UFO attack of 1872: Bizarre Artwork You Need To Own

What is the first thing you think of when you think about Cincinnati history? UFOs? Me too. Who could forget the great Cincinnati UFO attack of 1872?

If you’re a fan of history and the world of sci-fi monsters, the eternal search for the perfect Cincinnati-themed mantelpiece for your home is now over, thanks to the Etsy shop, Alternate Histories.

These bizarre, fantasy-driven illustrations are created by the talented Pittsburgh-based artist, Matt Buchholz. He uses a city’s history to, well, create an alternate history.

“I moved to Pittsburgh in 2008 and was inspired by the city’s history, especially the wealth of old lithographs, photographs, and maps from the 19th century,” says Buchholz. “I loved the look of them and kept wanting to find a way to showcase them. Finally, one day I had an idea: what if there was a giant monster in the middle of one of these images, digitally aged so that it looked like it had always been part of the photo? I made the first image of Pittsburgh, people liked it, and the rest is history—or fake history!”

The indie craft show, Crafty Supermarket, actually encouraged Buchholz to take a look at Cincinnati's history. He has sold his pieces at the show several times.

“I love a lot of the cities in this region, and I was inspired to create work for Cincinnati because of Crafty Supermarket,” he explains. “I enjoy taking my work on the road to other cities because it’s a chance to meet and sell to new people, an also because it lets me create new work for each locale.”

To create his beautifully obscure illustrations, Matt starts with a strong, intriguing, historic piece that has some empty space, then he lets his imagination run free.

“I always start with finding an interesting historic image. I source them through online archives, used book stores, and online stores. Once I find an image I like, the negative space in the picture and the elements of it let me figure out what creature should go in there. I change as little of the original image as possible, just adding in a giant tentacle, UFO, or whatever.”

Although he may add a random spacecraft or giant octopus, Buchholz still considers the historical context and how he can frame an alternative storyline around it.

“My favorite Cincinnati piece is the ‘Cincinnati: Avoid Monsters, Take the River’ piece that I just added in 2018. I always write a fake story about each image, and this one with the idea that the preponderance of riverboat travel in the region was in part due to a way to keep goods safe from rampaging city monsters, just makes me laugh.”

You can find Matt Buchholz’s Alternate Histories pieces on his Etsy page.

If you want to check them out in person, he’s planning on bringing all his fantastically strange pieces to Cincinnati’s Crafty Supermarket later this year.