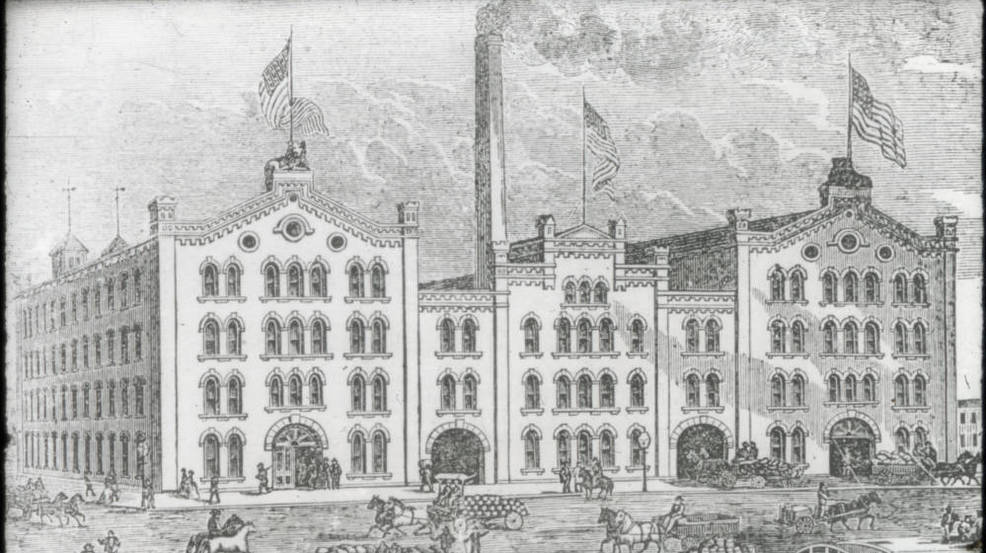 The Windisch-Muhlhauser Brewing Co., known colloquially as the Lion Brewery, sat on the site of the present-day Cincinnati Ballet building at 1555 Central Parkway. When it was built shortly after the end of the Civil War, it sat along the Miami & Erie Canal. Though most of it was destroyed over the years, sections of the former brewery remain. The cellars that were used to store beer found another purpose after the Ballet moved in. Today, the cellars are used to preserve the Ballet's archive of costumes. / Image courtesy of the digital archive of The Public Library of Cincinnati and Hamilton County // Published: 12.11.18
SEE MORE

From Beer to Ballet, Remnants of a Historic Cincy Brewery Find Modern Purpose

The corner of Liberty Street and Central Parkway has long been a shelter for some of Cincinnati's most beloved treasures. Driving through the wide, busy intersection today, you may not notice what's currently there; an odd assortment of buildings huddled together and standing back to back in the obtuse-angle of pavement that corners them. Aesthetically, they are a motley troupe of classic and modern styles rising from the asphalt at varying heights.

One of these buildings, the tallest in the middle of the group, is the remnant of a former brewery built upon that spot just after the Civil War. It's part of the former Windisch-Muhlhauser Brewing Co., once Cincinnati's second-largest brewer. Back then, the building had a significantly larger footprint to facilitate the brewing of beer. Storage cellars beneath the structure kept the alcohol at a stable temperature to ensure quality. It was, in a sense, refuge from the unpredictable, ever-changing temperatures Cincinnatians know all too well. Because of two massive lion sculptures that adorned the top of the brewhouse building, locals referred to it as the Lion Brewery.

Back then, the brewery was built along the banks of the Miami & Erie Canal. By the 1920s, both the canal and the brewery had met their end; the canal because of a steady decline in its use and the flood of 1913, and the Lion Brewery because of Prohibition. After the Eighteenth Amendment's repeal, Burger Brewing used the buildings until the early-1970s.

Sections of the old brewery began coming down over the ensuing years. Nowadays, barely any of it is visible. That lack of visibility, however, is partially why it continues to be especially useful 150 years after it was built.

FROM BEER TO BALLET

In the mid-90s, the Cincinnati Ballet sought to consolidate its office, studio, and storage into one location. After some public debate about moving to either Norwood or the Emery (now apartments and Coffee Emporium), they opened a new facility at 1555 Central Parkway—the site where the Lion Brewery once stood.

Unlike most of the structures above it, the old beer cellars still sat beneath the site. The temperature-controlled, windowless caverns proved to be more than a footnote in the story of the old brewery. They were also a boon for Wardrobe Mistress Diana Adams.

Diana, who has worked for the Ballet for 47 years, is the mastermind behind the company's on-stage appearance. The Ballet's choice to move its archive of costumes into the former Lion Brewery cellars proved exceptionally useful for protecting the delicate, expensive, hand-sewn costumes she'd built from the city above. The cellars slow the items' deterioration thanks to controlled temperatures and a lack of ultraviolet light.

One of the oldest pieces in the archive is from 1964 and is joined by the first tutu Diana ever made from the early 1970s. The artifacts—the lot of which hold memories in the form of old name tags and visible wear and tear from years of past performances—are physical reminders of both the legacy of the Cincinnati Ballet as well as Diana's long career in the industry.

Although, it wasn't an industry she necessarily meant to enter in the first place.

Diana is a life-long Norwood resident who lives in the house she grew up in. She attributes her expertise with needle and thread to "God-given talent," but doesn't neglect to mention the grade school teachers and others who taught her from an early age how to sew.

When she was young, her mother worked long hours as a nurse, leaving Diana in charge of sewing hers and her siblings' clothes. As she grew older, she enrolled in nursing school. Through a twist of fate, a car accident disrupted her course-taking, and she chose not to pursue a career in medicine after all.

Her passion for sewing never diminished, though. Diana made wedding dresses and did related work for friends. After a while, and thanks to a little networking that involved her aunt, she eventually became part of the fabric of the Ballet in 1972.

That would prove to be a big win for the organization. Diana took lessons on how to craft elegant costumes from world-renowned New York City Ballet costume designer Barbara Karinska who, in Diana's words, was "the end-all, be-all of wardrobe in the world in her day."

She honed her skills while creating piece after piece for dancers over the ensuing years. Diana wasn't only building costumes, though. During that time, she became a mentor and transformed her workshop into a refuge for performers who needed to vent about their stresses and anxieties.

"I made this a safe zone because so many of these kids are kids. Sometimes this is the first time they've been this far away from home. Nothing goes out of this room," she says. Diana's role as a confidant and counselor earned her the moniker of Mama Di.

It was when when Mama Di's refuge moved to 1555 Central Parkway that the former Lion Brewery cellars once again became the protector of yet another precious Cincinnati commodity. Within its arched, 150-year-old walls, the cellars harbor the well-advised, bright futures of local talent.

Visit the Cincinnati Ballet's website for information about the organization, as well as dates and ticket for upcoming performances.