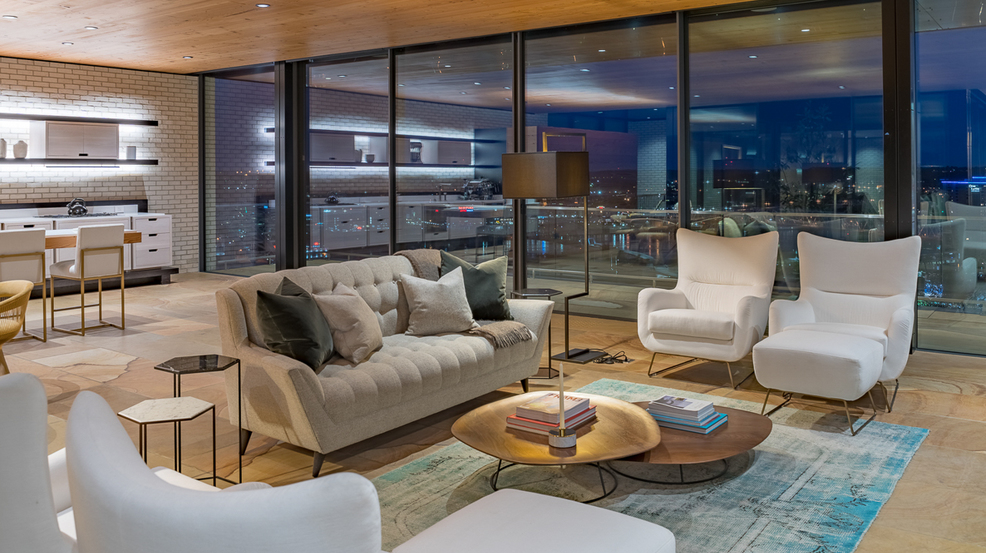 <p>1059 Celestial Street has only been standing since the end of 2017, but in that time, it's captured the imagination of those walking by it in Mt. Adams. Designed and built by Jose Garcia, the four-bedroom, two-story home features three full bathrooms and an additional half-bathroom, as well as a massive rooftop deck, open-air courtyard, three-car garage, and incredible 180-degree view of the surrounding region. It is a private residence. / Image: Chris Farr, The First Showing // Published: 5.13.19</p>
SEE MORE

This Is, Without a Doubt, One of the Slickest Cincy Homes We've Seen

I remember one of the first times I stopped in the parking lot where Celestial Street bends at the old Rookwood Pottery building in Mt. Adams. It was during a cotton candy-colored night right as the sun began melting into the horizon of South Fairmount on the other side of Cincinnati. The view was breathtaking, to say the least. The light glittering on the many glass windows above and below the horizon was a reminder that seeing stars, even if they're not actual stars billions of miles away, is sort of possible in the city after all.

For years I returned to the site, often trudging up Ida Street or the Mt. Adams Steps to get there. I'd introduce friends to the view and delight in their amazement. It was one of the first places I cut my teeth on how to properly make a long exposure with a camera. And I even proposed to my wife there in May of 2018; it was where we had one of our first dates years ago, and felt like the right spot to pop the question when it became evident we'd be together indefinitely.

During those many trips up and down Celestial Street to get to that premium Queen City view, I'd survey the landscape along the way. One house, which sprouted up rather quietly on the opposite side of Highland Tower Apartments, caught my attention when construction finally ceased. Bedecked in different hues of wood and surrounded by trees and tasteful landscaping, the modern, two-story home squeezed into a modest plot of land set a little bit back from the street.

It was a beautiful addition to the neighborhood and I longed to see the inside. If the view from Celestial's parking lot kept beckoning me up to Mt. Adams all those years, I knew this home had front-row seats to the same one. Resigned to my fate as guy who will never see the inside of this fresh, new house with (probably) an amazing view, I admired it from the sidewalk whenever it popped up along my walking route.

Fast forward a couple of years, and Michael Franz, a realtor with Coldwell Banker West Shell, as well as a residential designer at Downtown’s Design Lab, reached out to me with professional photos of the interior. As a reader of the site, he knew incredible homes were among our favorite subjects and asked if I'd be interested in seeing the inside.

The guy who will never see the inside of this fresh, new house with (probably) an amazing view understandably replied to his email with an emphatic 'YES.'

The house, designed and built by Jose Garcia, took two years to build and wrapped construction at the end of 2017. Its interior, designed by Julia Garcia, was styled by Barb Neyer, Hillary Randall, and Michael Franz at Design Lab.

"It was a labor of love by the current owners who are very design-driven, not to mention have impeccable taste," says Michael Franz. He further describes it as a "piece of art you can live in." After seeing the photos of the place, it's hard to argue with that point.

The home features four bedrooms, three full bathrooms, and an additional half-bathroom, with a three-car garage facing the street. Of the high-end materials used in the house's construction, Tennessee sandstone floors, Douglas fir wood, and imported windows from Luxembourg were included. That last feature is among its biggest aesthetic draws—its minimalist, modern style exhales plenty of open space only to fill it by breathing in as much natural light as the many windows will allow.

But it's not all about the interior that makes this house special. An open-air courtyard shrouded in glass plays with the boundary between interior and exterior in the middle of the home. Above it, a massive rooftop deck covers a third of the house's total footprint.

I didn't imagine it quite this way when I would walk past it on my way to the parking lot. It's actually better inside than I ever dreamed it was. That caught me totally off-guard when I saw the photos Michael sent along. But while I'd underestimated the interior, I wasn't wrong when I imagined the view—it was exactly what I thought it would be. While we all share the parking lot view on Celestial Street with each other, I can only imagine what sitting on that private rooftop deck, with a beer in hand after a long day, feels like without having to scale a mountain to get to it first.

1059 Celestial Street is a private residence. Visit the photo gallery above to see the inside.