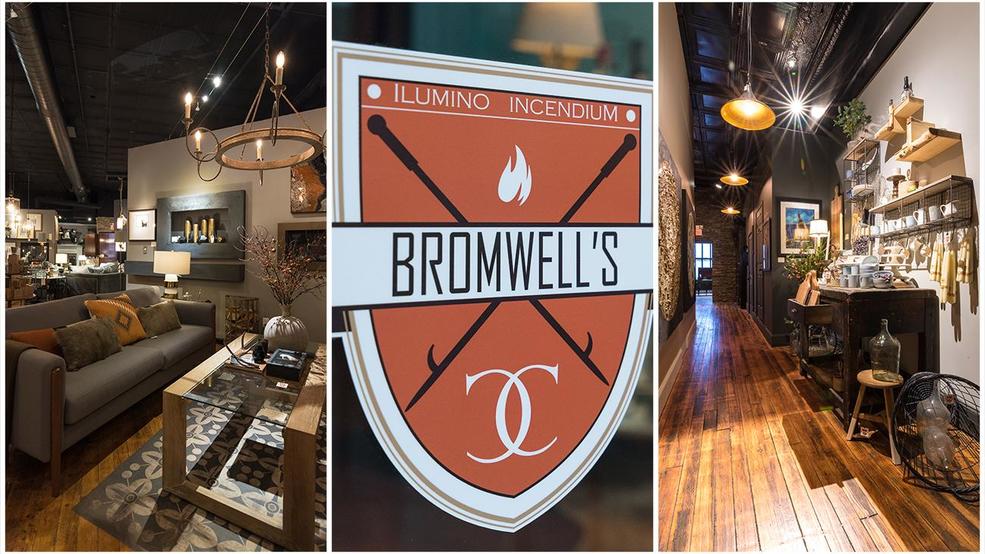 Speaking from firsthand experience, 4th Street's Bromwell's is the most comfortable store you could visit during a polar vortex. Inside, a collection of fireplaces quietly burn, each one perfectly framed atop a matching hearth. You get warmth in stereo as you wander two stories of brilliantly organized showrooms bedecked with beautifully arranged home furnishings. Though it's Cincinnati's oldest continually operating business, Bromwell's still finds new ways of adapting to an ever-modernizing world.

As of this year, Bromwell's celebrates its bicentennial anniversary. To put that into perspective, the City of Covington just celebrated its 200th birthday four years ago. For further perspective, the city of Cincinnati wasn't even 30 years old when Bromwell's began selling its wares.

So how'd a legacy business like Bromwell's survive two full centuries to become what it is today? One word: innovation.

Bromwell's first act began when Jacob Bromwell, a veteran and former Baltimore resident, founded the store in 1819 after emigrating to Cincinnati. It originally sold supplies to settlers who, just like him, came to the area in the early 1800s. Achieving success in that endeavor, the business grew to manufacture metal goods for the home, such as flour sifters and tin cups.

The business of fireplaces proved lucrative. So lucrative, in fact, that Bromwell's split its home goods and hearth-centric divisions in 1923. The Grewes—only the second family to own the business since the original Bromwells—purchased the fireplace division and opened a store in Cincinnati. The housewares division left for Indiana.

For the next eight decades, the Gerwes and their fireplace store continued writing the story of Bromwell's in Downtown Cincinnati. By the mid-2000s, though, Gary Gerwe decided he was ready to sell the brand. While Bromwell's recognition was strong, the business had grown tired. He found a prospective buyer and prepared to move on.

Jeffrey McClorey moved back to Cincinnati after living in South America for several years. Seeing an upward shift in the economy, he began buying property, including the building Gerwe's store occupied. He planned to be Bromwell's landlord.

But Gerwe's buyer backed out. Instead of selling, he resolved to close the shop. Bromwell's, it seemed, was finally coming to an end.

McClorey, understanding the importance of the Bromwell's brand, couldn't let that happen. He purchased the business and hired Gerwe to help him run it. For the third time in 186 years, Bromwell's belonged to a new family.

McClorey renovated the store. He acquired the building next door and expanded the showroom to 10,000 square feet. The second floor of the building hadn't been occupied since 1974, and after clearing an inch of dust and investing a very large sum of money into rehabbing the space, he built a showroom that would rival flagship retailers in New York and Chicago.

Understanding not everyone can visualize a fireplace in their home, he arranged home furnishings around each one. These lifestyle vignettes helped guide the customer's imagination and ultimately led to another source of revenue; customers loved the Ohio-made furniture and wanted to buy it.

Along with the furniture, other quality home goods appeared on the showroom floor, ironically bringing the days of old back to an evolving Bromwell's. Those goods weren't found in big-box retailers, either. Everything was curated and kept with Bromwell's brand legacy.

“As we enter a retail reset, the provenance of person and place becomes more important than it ever has in past generations. A new emerging Millennial shopper is more focused in the source of goods,” says Brent Hodge, Director of Merchandising and Creative.

Bromwell's adaptation to the desires of the modern customer added fresh wood to the fire. In just a few short years, McClorey's business roared with renewed energy. He even added Harth Lounge, a bar that's since become the premier live jazz destination in the city.

“It’s nothing I ever would’ve expected on my second act of work. It’s been very satisfying on every level," McClorey says.

After reaching the 200-year milestone and successfully reenergizing the brand, McClorey and crew are planning their next steps. Bromwell's has two major things coming in the near future.

First, the third floor of the building will feature a new concept: Bromwell's Attic. It'll sell estate-style, one-off products—things you won't find anywhere else. These items will be available to "those in the know" and to the public on select days. While Bromwell's proper doesn't feature an online store, Bromwell's Attic will have an internet presence.

Secondly, for the first time in its 200 year history, Bromwell's is opening a second location in the suburbs between Cincinnati and Dayton. The store will offer the products it's known for, but will be a convenient option for those who live farther away from Downtown. McClorey says it won't have the same exact feel of the Downtown store (it is a destination, after all), but will offer Bromwell's products.