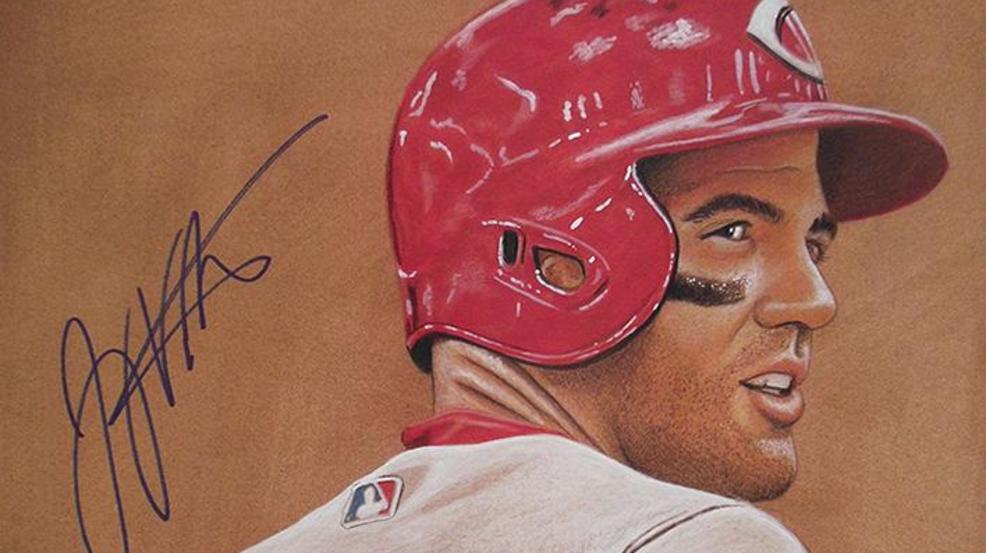 When you think “pets,” one doesn’t necessarily think of the Reds, and vice versa. But both have one person in common: artist Brent Naughton.

Seven years ago, the Fairborn native and current Eastgate resident was a package designer for P&G who found himself coming home and sidling up to an easel to decompress. Soon enough, he realized painting was his passion. “I’d done enough artwork of diapers and dog food that I thought I’d like to try something different,” he laughs.

And so he did. Naughton launched his sports portrait business in 2011, using colored pencils and acrylic paint to craft portraits of members of his favorite sports team: The Cincinnati Reds.

Growing up, “Everyone around just loved baseball, and I caught the bug at some point,” he recalls. “It’s just always been a passion of mine.”

That much is clear. Naughton doesn't just paint Reds players, he knows them – like really knows them. "I often have met a lot of the athletes I’ve done artwork of, and those experiences come through in my work," he says.

For most, there’s always some level of risk to making your passion your profession, but not for Naughton, who has a TV in his studio so he can watch the Reds while he works. Watching a game “can be a nice way to forget about the problems in your life,” he explains. “You just lose yourself in it.”

As for how he chooses the players to paint, Naughton says, “It's usually somebody I respect. I try to find athletes with good character.” And so he's painted everyone from “Harvard” Eddie Grant, a Reds third baseman who was one of the few active major league players to die in action during WWI, to current fan favorite Joey Votto, who went viral last year after hitting a homer and then giving his bat and jersey to a six-year-old fan with cancer.

Likewise, the Reds became big fans of his. Naughton has had numerous pieces showcased in the Reds Hall of Fame, the Robert Clemente Museum in Pittsburg, and the Dayton Art Institute.

“I’ve also been commissioned by a few of the Reds who saw my work and wanted a portrait for themselves,” he says. “It’s always interesting to get their reaction when you show them the finished piece.”

So where do pets come in, you ask?

It’s part savvy marketing (baseball is seasonal, you know) and part sentimentality. This past spring, Naughton and his wife Michelle Blades (who runs his website and social media) lost a beloved pet – a chocolate lab named Chimpanzee who wore an orange color. “Through art, I always get a little help to get through things, so I created something to remember her by,” he describes. “And once word got out, it grew into its own thing.”

Once Orange Collar Pet Portraits was born, Naughton also found that he put out some of his most personally fulfilling work. “With the pet portraits, when you hand over a painting, the emotions can run pretty deep,” he says. "So that's been pretty rewarding."

In addition to the Reds and pets, Naughton also paints movie characters and historical figures — sometimes a mix of the two. “I created one piece called Yoda Elvis,” he says. “I’ve probably sold more of those than anything else I’ve done.”

As the house artist for local jaunts Fireside Pizza and Eli’s BBQ, Naughton has been asked to ship originals and prints of his artwork all over the country. It’s a level of success even he couldn’t have imagined.

“In the second grade I decided I wanted to be either the second-fielder for the Reds or an artist,” Naughton says. “It’s a full-time job, seven days a week, but we’re blessed.”

Check out some of Naughton’s work by clicking through the gallery above. Order prints or commission a piece at either of his websites: brentnaughton.com and Orange Collar Pet Portraits on Facebook.