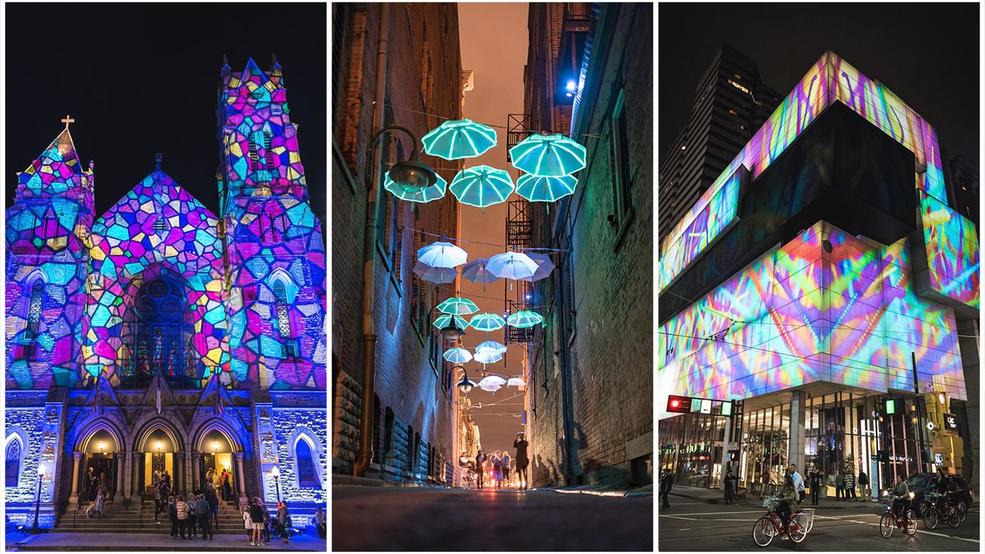 Exactly one year ago today, BLINK, the multi-day arts festival that brought an estimated one million people to the inner city over the course of four days, officially started. The festival was spread throughout 20 blocks of Downtown and Over-the-Rhine and included projection mapping light displays, musical performances, murals, and more. The $3.6 million-dollar event was paid for by the generosity of the Carol Ann and Ralph V. Haile, Jr./U.S. Bank Foundation and produced by Brave Berlin, Agar, ArtWorks, and the Cincinnati USA Regional Chamber. In April of 2018, it was announced BLINK would return on October 10, 2019 for another 4-day festival of lights and art. / Image: Phil Armstrong // Published: 10.12.18
SEE MORE

One Year Ago: A Look Back on the Success of BLINK Cincinnati

If you were in Cincinnati one year ago, there's a good chance you experienced the beginning of what would go on to become one of Cincinnati's most significant festivals in years. BLINK, the interactive arts festival that spanned 20 city blocks with projection mapping light displays, musical performances, and so much more began on Thursday, October 12th, 2017 and ran through Sunday, October 15th.

It was a magical four days Downtown. Trying to narrow down our favorite installations was a challenge; they were all so good in their own, unique ways. It was an even greater challenge trying to point a camera in a direction that wouldn't instantly produce something beautiful.

So we were genuinely excited when it was announced back in April that BLINK would return in October of 2019. In exactly one year from today, we'll be in the middle of BLINK again. The festival begins on October 10th and runs through the 13th.

Last year, it's estimated that a million people went to the event between Thursday and Sunday. If you did any walking around in the CBD and OTR, that'll come as no surprise. Those nights, we relearned the true meaning of "shoulder-to-shoulder." It's probably safe to say that the same amount—if not more—will return to the streets of Cincinnati for the next iteration.

We're ready. Bring on another round of multi-story light shows covering our favorite buildings.

Paint more murals by international artists on the blank faces of our old buildings.

Hang those neon umbrellas in the alleys and get those glowing vehicles rolling again.

The best and brightest put their hard work into BLINK, making it worthy of revisiting even a full year later. Walk with us down memory lane and check out the gallery of images above from that spectacular celebration.