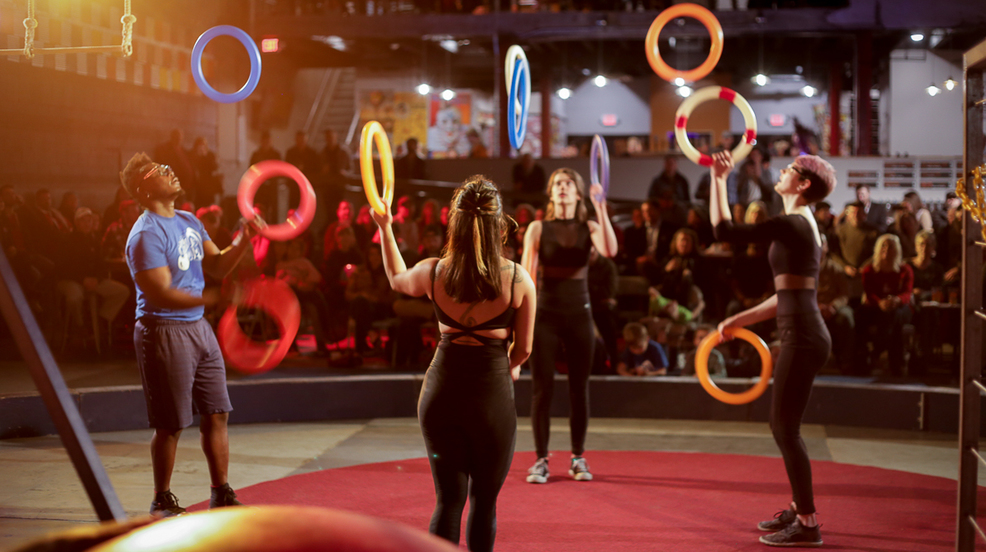 Bircus Brewing Co. has made some changes to its Ludlow beer and entertainment arena. The renovations include a new bar, a new kitchen, a few elevated spots for small groups to scope out the fun down on the floor, and an expanded taproom large enough to handle huge crowds. The new space is perfect for catering to patrons while continuing to host their special events such as wrestling, dance parties, and, of course, circus performances. ADDRESS: 322 Elm Street (41016) / Image courtesy of Point & Click Studio // Published: 2.7.19
SEE MORE

When we first visited Bircus Brewing Co. in Ludlow, KY last year, it was a tiny taproom with a gigantic dream. A year later, we returned to see the dream brought to life—a once defunct theater space turned gigantic taproom, brewery, and event space. And it’s magnificent.

As we mentioned with our first visit, Bircus is all about clowning around. Their “Chief Goof Officer” Paul Miller is a former Ringling Brothers clown who wanted to create a space for outrageous events where aspiring circus performers could hone their craft. Of course, that takes money, and that’s how Bircus Brewing Co. was born.

Their model (borrowed from something similar in Belgium) is simple: instead of serving other people’s beer, brew your own and make more money for your clown pursuits. Not only could the beer be sold at the in-house events, but it could also be distributed to other venues and stores.

By selling 500 $1,000 shares, Bircus Brewing Co. was able to not only renovate the old Ludlow Theatre, but also brew top-notch beers right in-house. With their fundraising complete, Bircus Brewing Co. transformed the old theater space into one of the coolest taprooms in the Tri-state.

As you walk into the space, you can't help but notice a new Bircus element: the long, sleek, butcher block bar. Just beyond the bar, the space opens into a massive area perfect for beers with friends or for their ever-entertaining special events, such as wrestling, dance parties, and, of course, circus performances.

The renovation also comes with two elevated spots perfect for small groups or for anyone wanting a birds-eye view of all the fun down on the floor.

Once limited by their cozy little taproom, the new Bircus taproom space is large enough to handle huge crowds, which is exactly what they’ve come to expect since moving into the main theatre space a few weeks ago.

With a new partnership to distribute Bircus Beer throughout Kentucky, a full calendar of events (including a recent event with Jerry Springer as emcee), and all sorts of other projects in the works, the future has never been brighter for this bunch of beer-brewing clowns.