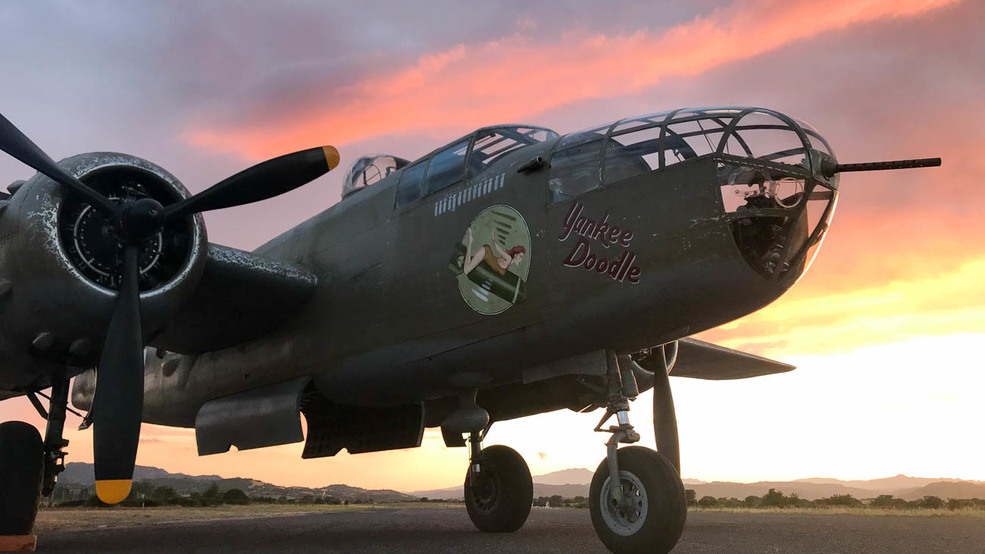 George Clooney executive produces, directs, and stars in the Hulu miniseries Catch-22. The show is based on the famous, satiric novel of the same name written by Joseph Heller. The story is set during WWII and also stars Christopher Abbott who plays Captain John Yossarian—a B-25 bombardier in the U.S. Army Air Forces. The series needed an authentic and airworthy B-25 bomber plane, so Paramount Pictures arranged to use a bomber from the Tri-State Warbird Museum—a historic aviation museum in Clermont County dedicated to restoring WWII aircraft, honoring veterans, and educating local youth. / Image courtesy of the Tri-State Warbird Museum // Published: 10.15.19
SEE MORE

It may not be the Warner Bros. backlot or the soundstage studio where your favorite show is filmed, but if you live in the Tri-state, you can still get up close and personal with a piece of Hollywood—and history.

If you've already streamed Hulu’s Catch-22, then you've seen this piece of history and may not have even known about its local connection. If you haven’t watched yet, what are you waiting for?

George Clooney executive produces, directs, and stars in Catch-22, a mini-series based on the famous, satiric novel of the same name by Joseph Heller. The story is set during WWII and also stars Christopher Abbott who plays Captain John Yossarian—a B-25 bombardier in the U.S. Army Air Forces. The book is responsible for the "Catch-22" paradox becoming a standard expression in American culture. If the pilots wanted to get out of flying missions by declaring insanity, then they weren’t actually insane, but rather completely rational and therefore able to fly—a Catch-22.

Clearly, the series needed an authentic and airworthy B-25 bomber plane to set the scene. When George Clooney came calling to cast the aircraft (okay, it wasn’t Clooney himself, but Paramount Pictures), the Tri-State Warbird Museum was all-in. TSWM is a historic aviation museum in Clermont County dedicated to restoring WWII aircraft, honoring veterans, and educating local youth.

Its B-25 was flown from Cincinnati all the way to Italy where the show was filmed. The trip required 31 flying hours across seven days.

In case you’re curious what it takes to get a WWII era aircraft across the pond, the pilots’ journey looked like this:

The cruising altitude of the flight was about 9,000 feet, but they often had to go lower for weather conditions (even as low as a few hundred feet through the fjords of Greenland!). For all water crossings, the pilots were wearing cold weather survival “gumby suits.” It was cold at sea level (mid to high 30s) and even colder at altitude. Since the B-25 has no heating system, the pilots lost feeling in their extremities by the end of the Canada/Greenland/Iceland legs of the trip.

Local pilot Paul Redlich was hired to fly the plane in the series. You won’t be able to tell, though, thanks to movie magic.

Formerly named “Axis Nightmare,” the B-25 was renamed “Yankee Doodle” for the show. Still in its movie paint, the B-25 looks more authentic than ever. When you stop by the Tri-State Warbird Museum, you’ll notice the plane legitimately looks like it’s been through war. That’s more movie magic for you.

So, when you stream Catch-22, just know there’s a little piece of Cincinnati in it. And you can see it in real life with a quick 30-minute drive to Batavia.

The Tri-State Warbird Museum is located at 4021 Borman Drive (45103) next to the Clermont County Airport.