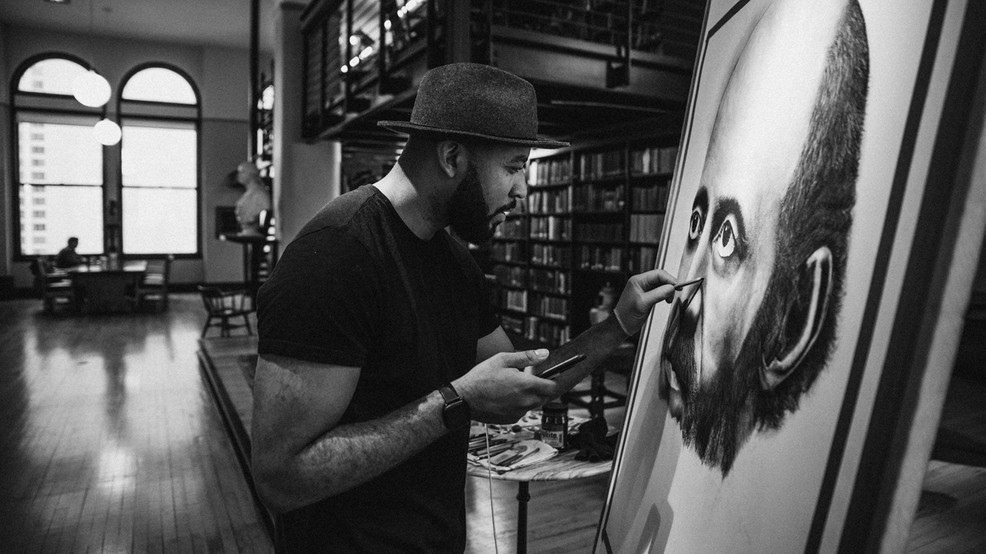 Gee Horton's hyper-realistic drawings done with graphite and charcoal pencils have earned him accolades all over town. Most recently, you'll find Gee as the artist-in-residence at the Mercantile Library, where he has been commissioned to draw a six-foot portrait of Peter H. Clark, the library's first African-American member. Gee also sits on the board of ArtWorks and Wave Pool, serves as a co-host of the Urban Consulate, and supports the artist community in many ways. / Image: Shay Nartker // Published: 6.28.20
SEE MORE

While I haven't done any research, I'd wager a guess that coaching women's basketball at the university level is not a typical starting off point for most artists. However, most artists aren't Gee Horton.

Originally from Louisville, Gee was introduced to the Queen City while attending Thomas Moore University. And, even though he had an on-again-off-again love affair with art his whole life, he decided to start his professional path coaching women's basketball, coaching at the University of Louisville, Furman University, and Xavier University.

It was during his last stint at Xavier that landed him in the Cincinnati area permanently and where he realized he was burned out on the coaching lifestyle. This ultimately led him to give up coaching and reconnect with his art—lucky for us!

Cincinnati Refined: When did you first start drawing and why?

Gee Horton: As a kid, I was naturally gifted with the ability to draw, [although] I quit around age 13. I wanted to focus on athletics, which led me to a career coaching college basketball.

Eventually, I [became] miserable with the coaching lifestyle and I needed a creative outlet so I picked up a paintbrush. That wasn't exactly the right tool, and I kept trying to figure out what I enjoyed doing and then one day, when I was 33, I picked up a graphite charcoal pencil and I have been drawing ever since.

Over the last three years, I have been working on my craft and just drawing. It gives me joy and I fell in love with it, and it is something I feel I'm called to do.

CR: Have you had any art training?

GH: My senior year at Thomas Moore I signed myself up for a drawing class called "Drawing on the Right Side of the Brain."

It was that class that reintroduced me to this talent I had. I fell in love with it all over, and it was phenomenal.

After graduation, I knew I wanted to coach so I neglected [my art] again. My professor in that class stopped me right before graduation and asked me what I was going to do when I graduated. I told her I wanted to coach and she told me that was foolish and I should focus on my art and I laughed at her.

CR: Why do you prefer working with graphite and charcoal pencils?

GH: When I said I was trying to figure out who I was as an artist, it was a journey of trial and error. I was spending a lot of time at the art store trying to teach myself color theory and how to blend colors, etc.

But it wasn't until I was working on a project that required me to use deep contrast that reminded me of the class I took at Thomas Moore when we had to use graphite and charcoal. I went to the art store and bought the supplies and that project literally reconnected me to drawing. I put that project to the side and just started sketching again and I found my superpower.

What I love about the medium is it has so many capabilities. I find freedom in the looseness of charcoal and pencil. It allows you to manipulate pencil lines and shapes and with that, you can create shapes with deep, rich contrast and I can go as deep as I want with the details and pencils.

It's such a tedious process to paint. [With pencil], if I don't like it I can just break it. With paint, I'd have to start over.

CR: Of all the exhibits you've been featured in, which one has been your favorite and why?

GH: During BLINK [2019] weekend, I was in the Cincy Nice Social House (CNSH) exhibit. This was by far my favorite because it was more of a performance installation where I was drawing live for the entire weekend. The CNSH was a creative collective of artists, musicians, and change agents that came together with the idea of activating a pop-up venue during BLINK.

I was drawing inside of an eight-foot, illuminated glass box. There were lights all around it and my art surrounding [outside the box] and I had what I was working on inside. It was cool because I like drawing in public; I like showing what I can do in front of people.

That was by far the largest event where I could do that. It was kind of a spectacle, where the symbolism really resonates for me. Here, I am in this glass box where no one can really touch me, where I, too, was a part of the art. The box protected me from engaging. I didn't have to stop and have any conversations. The art spoke for itself and I was a part of it as well.

CR: How long have you been at the Mercantile Library as their artist-in-residence, and what does that entail?

GH: I've been there since November 2019 and they commissioned me to do a six-foot portrait of Peter H. Clark. He became the Mercantile's first African-American member in 1872. He was an abolitionist, a freedom writer, a journalist, and an advocate for education for blacks in America. He trained generations of black educators who went on to become teachers.

I saw it as an opportunity to work on this beautiful piece and I also saw it as an opportunity to engage the community to watch me work. Before COVID-19, once a month we'd open up the space to the public as a way to come and learn about the project as well as the Mercantile Library. Now I'm going to be there once a week and I'll be the artist in residence until it's finished. Members can go see it, but it's not open to the public.

CR: What do you hope people take away from your art?

GH: A lot of my work is rooted in hyperrealism, and one hope is that on a technical side, viewers can appreciate the technical work, skill level, and the amount of attention to detail that goes into each drawing to make it look realistic as a photo.

CR: What do you like to do when you aren’t drawing?

GH: Spend time with my family. I have a wife and two kids that I love so much, and I spend a lot of time with them. I [also] sit on the board of two organizations in town: ArtWorks and Wave Pool. I support the artist community, and I also serve as a co-host of the Urban Consulate where we have a network for courageous conversations across the spectrum.

CR: How have your life experiences influenced your art?

GH: I think my life experiences are directly correlated to my art. Besides the commissioned pieces that I'm working on, the drawings that I'm working on are, in a way, telling a story into my life and art allows me to tell stories as a reflection of my life. Art is a vehicle that grants me access into that story as well as the viewer.

CR: What's next for you as an artist?

GH: In addition to the Mercantile, I have some other commissioned pieces that I'm going to work on.

I'm focusing on a series called "Coming of Age." It's a 10 to 12-piece series with photographer Jason Carter, based on the story of a young boy's transition to adulthood. While he's on this conquest to transition to manhood, he finds himself searching for a number of things: love, purpose, and most importantly his identity as it is directly influenced by the environment he's surrounded by.

I don't feel like we talk enough about adolescence and how critical it is, especially in the case of this 13-year-old boy. He's an African-American living in the inner city and he's on the verge of living a life that's full of promise, living a life that's full of love. He's searching for what it means to be African-American. The boy is also my nephew.

I have 10-12 photos of him that I plan to draw and put them into the show I'm working on, to delicately talk about that moment in this young boy's life.