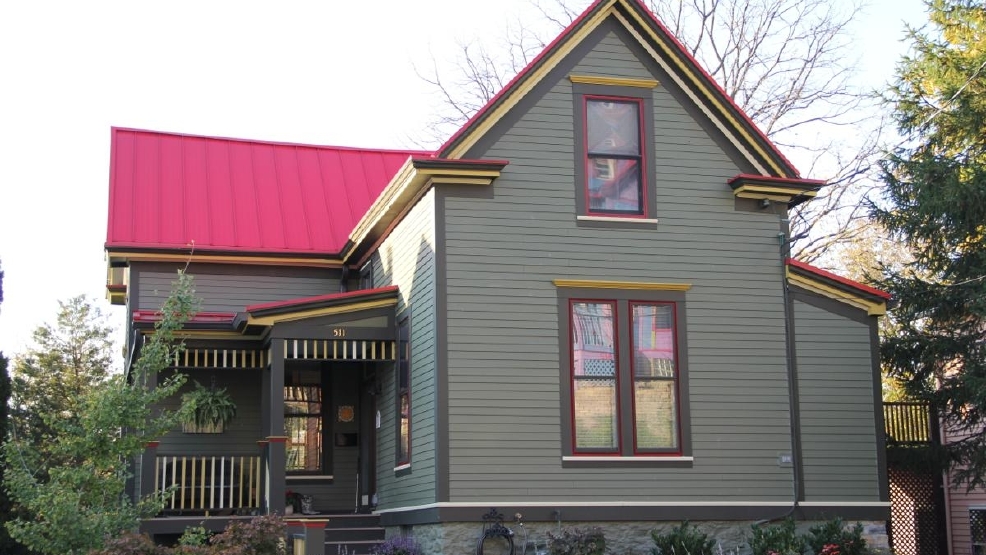 Houses are a lot like people. Some of 'em just have it."It," of course, being that certain indefinable something that lends a home its own personality, flair, and magnetism. The thing that puts a twinkle in the home's eye, so to speak.

If that is indeed true, and some homes possess more innate charisma than others, then this ingeniously (and intrepidly) redone Victorian home in Columbia Tusculum is the George Clooney of houses. It's got "it" factor coming out of its ears. (And the owners, Kim & Chris Nietch, aren't so shabby either.)

The home, much like many of the neighborhood's houses, is over 100 years old and bears the telltale Historic District plaque by the front door to prove it. Another marker of its age: it needed a lot of work.

Kim and Chris had been living in the house for right around six years prior to launching into what was to be a rather extreme overhaul. "The house needed a new roof," says Chris. "We had to replace the box gutters, siding, and trim. Reinsulate and seal. Correct some foundational issues. The list was pretty long. That was just to get it back to baseline."

And that's where the adventure comes in. Instead of plodding through the checklist of requirements like some barrage of adult-onset homework, Kim & Chris elected to grab the bull by the horns. Chris, an environmental scientist, and Kim, a yoga teacher, shared a vision of creating a home that combined the area's history and charm with progressive-minded sustainability practices. That vision, they decided, was an idea whose time had come.

"We said, you know what, if we have to do all of these rehabs anyway, why don't we just go all in?" Chris recalls. "Why don't we try to do a sustainable upgrade and fix all these things in the process?" Kim shakes her head, laughing, "And put an addition on."

The result: an expanded home that serves a multitude of functions while still feeling impressively united and fluid. (Picture your "open concept" dream kitchen walking right out of your HGTV screen and inserting itself into an old hillside Victorian. You've pretty much got the Nietch home.)

There are still plenty of notes of the house's heritage -- including a photograph of the home, as it looked generations past, given to the Nietches by a woman who grew up in the house. These elements stand side by side with some of the most inventive and forward-thinking building technologies around. We'll get into specifics in a second, but suffice it to say that the home's "solar pergola" is wired to the internet so that Chris & Kim can pull up a real-time report of the solar panel's energy output. Not exactly your run-of-the-mill remodel, huh?

The house's lower level hosts Kim's yoga studio, Yogasana. The space is, as you would imagine, simple. Clean without being anywhere close to austere. It feels, in fact, quite inviting (due in large part to the picture windows that face the backyard pond and stream). And thanks to the water circulating beneath the floor (heated by the house's solar thermal water heating system), the room is the perfect level of warm for that 6 a.m. Ashtanga yoga session.

Care and forethought went into everything. Literally. Everything.

The kitchen counters: procured from Greener Stock. (See below for contact.) The cabinetry surrounding the vanity in the yoga studio's spa-inspired restroom: handmade by a local carpenter (and Yogasana student). The refrigerated beer drawer: ingeniously hidden within the large, wrap-around kitchen island. (And positioned, of course, in the portion that's closest to the TV.) Even the colors of the balusters on the front porch were deliberately selected to add a touch of subtle character. Look closely, there are a total of four shades of yellow. And it totally works.

Oh, and as you can see in the "Highlights" above, the supremely fetching red metal roof that attracted me to the house in the first place is about as sustainable as you can get, too. (Low-toxicity resin, what!) I could wax on and on about the amount of conscientious work that went into this house, but how 'bout we let the photos speak their thousand words?

Sustainability, which operates on a bit of a sliding scale, is not at all the "road most traveled." And, as Chris freely admits, it has its own learning curve. In the Nietches' case, that process requires a union of technical know-how and a yogi-like willingness to adjust, reassess, and refine.

So! For all those out there who, like myself, barely know how to read a water meter, much less calibrate a solar panel pergola, I extend my props to those pioneers bringing these approaches, practices, and materials that much closer to the mainstream. (And for making it look so darn good that everybody's gonna want in on the action.)

Speaking of which to the photos!

Interested in some of the things you saw here?
Here a some of the folks who had a hand in crafting this amazing house.