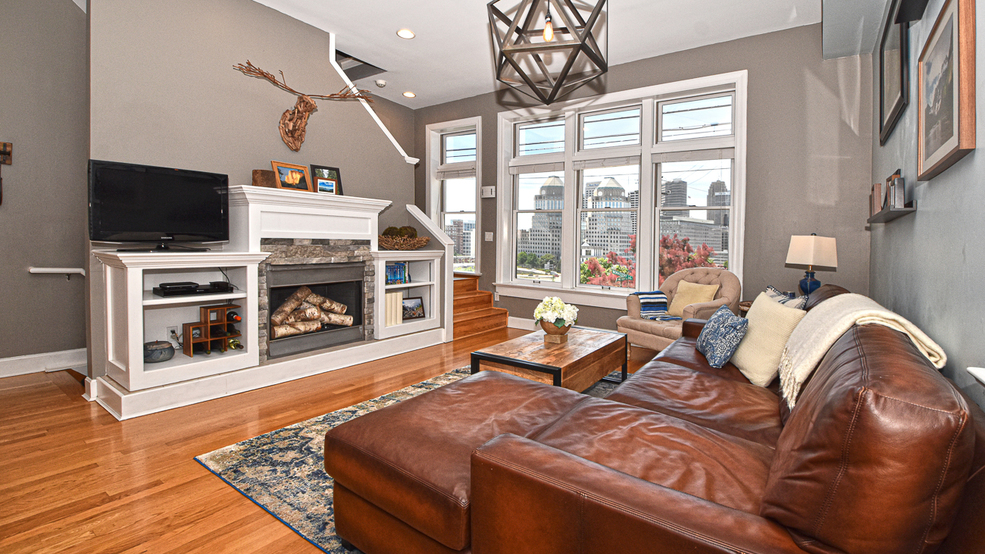 902 Monastery Street in Mt. Adams is a 2 bedroom, 3 bathroom, 3200-square-foot home with a two-car garage, private back yard, and a third floor walk-out balcony. While the house is outfitted with modern luxuries, its bones date back to 1865. It's one of the few remaining houses in Mt. Adams that haven't been demolished over the last 150 years. Because of its placement on the hill, walking from Downtown to 902's doorstep is easy and doesn't require scaling the whole mountain to get to it. It's on the market for $549,900. / Image: Kathy Kelley // Published: 7.11.19
SEE MORE

902 Monastery Illustrates Why Living at the Bottom of Mt. Adams Is Better Than the Top

If you’re familiar with Mt. Adams at all, you probably know how challenging it can be to traverse depending on the street. If you’re not used to walking up steep hills (I’m looking at you, Hill Street), reaching the summit can be a breathtaking task. That’s one of the drawbacks to living on a hill; it’s easy to come down, but unless you’re in a vehicle, the return trip will get ya.

So when I tell you 902 Monastery Street is in Mt. Adams, you probably imagine that climb up the hill before you get to the intersection of Celestial and Ida Street. You know, the one where you’ll almost always turn right to get back to that stunning view overlooking the city below. I mean, who could blame you for that, right?

Or you might think of cresting the mountain top at the point where UDF emerges from the Monastery Street asphalt and into view with every step you take. There, a cold ice cream cone beckons you inside. Again, who could blame you?

Well, 902 Monastery Street isn’t anywhere near those spots. The best thing about 902 is you don’t actually have to scale Mt. Adams to enjoy living there. It’s in the perfect place at the base of the hill. If you want to enjoy walking down to Downtown and Over-the-Rhine from your doorstep without breaking a sweat, this is the place to live in Mt. Adams. And if you think being at the bottom of a mountain won’t make for a heckuva view, you’re dead wrong.

902 is a special house. For one, Abraham Lincoln was still our president at the time it was built. The Hamilton County Auditor’s website lists it as being built in 1865. Essentially, 902 Monastery Street, which was then called Observatory Road for the (you guessed it) Observatory up the road, has seen Mt. Adams transform over the last 150 years. If you look at historic maps, not much of what originally existed at that time remains on the hill today, from the other homes that used to surround it to the Mt. Adams Incline that dissected Baum Street several doors down. That obviously makes 902 Monastery a historic property.

But as the Hallmark cards we buy our maturing relatives every year suggest, age isn’t everything. While the façade of the house hints at its past, 902 Monastery doesn’t look a day over 30 thanks to tasteful updates and additions over the years, with several as recently as five years ago. If anything, the house resembles a new build more than an old property.

Case in point: how many Civil War-era properties tout a third-floor flex room with floor to ceiling windows and an outdoor, walk-out balcony? How many of those same houses can call a two-car garage one of its defining features? Washing machines weren’t even invented at the time 902’s bricks were slapped together, but it has a laundry room conveniently placed on the 2nd floor.

The kitchen, which is set up perfectly to entertain, boasts double ovens, a gas stove, and an open concept that flows into the living and dining rooms to ensure the chef isn’t left out of the party. Plus, the master suite, with its enormous walk-in closet, sports a bonus jacuzzi tub beside the walk-in shower.

“PFFT! Only one jacuzzi tub?” you incredulously scoff. Hold your horses, pal. That aforementioned third level with the awesome walk-out balcony has another jacuzzi tub. That’s right. 902 Monastery has the distinct honor of pluralizing “jacuzzi tub” on its resume.

Living on the fringe of a neighborhood has its advantages. When you think of inner-city livin’, you don’t often associate a big, private back yard with it. 902 Monastery laughs in the face of that notion; its back yard is shaded, secluded, spacious, and everything you’d imagine the perfect yard would be in a place like Mt. Adams. Go check out the photos above. You’ll see.

It all circles back to location, though. As alluded to earlier, 902 Monastery is an ideal Mt. Adams address if you want to partake in the bar scene Downtown and in Over-the-Rhine without hailing a cab or breaking a sweat walking there. The 6th Street steps, which lead right into Downtown, are just 200 feet from the house. And since it’s at the base of the hill, coming home late after several pints won’t require Olympic training to pole vault into bed.

Check out the listing for the house, and peep pics of the place in the photo gallery above.